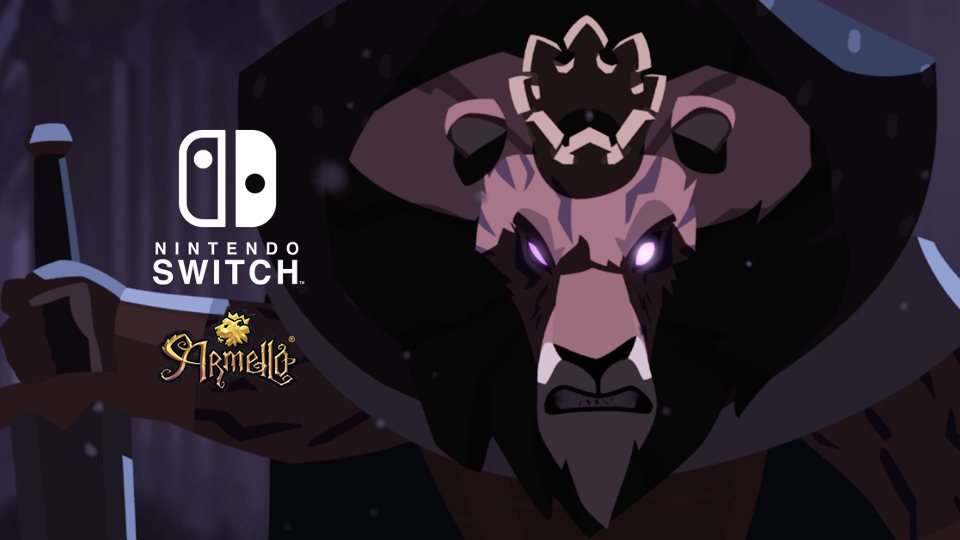 The bears and the wolves are at war. The vultures are circling but the wily rabbit may be the one to trump them all. No, this is not a reading from Aesop, nor is it a summary of an American sports season. This is Armello and it has arrived on Switch.

This game surprised me and I must say I have started writing this review several times over. I am big enough to admit that when I first picked it up, I hated it. I found it needlessly complicated, overly based on luck and a shadow of the game it had the potential to be. Then I stopped playing. I left it for a while and came back with fresh eyes. Steadily I became immersed in it and before long I had made a complete u-turn. This is a game perfectly suited to the Switch with its ‘pick up and play’ philosophy but, much in the same way as Civilization VI, it is not just possible, but highly likely that you will get drawn in to the intrigue and strategy of the game. Before long it’s dark outside, the only light in the room is from the screen sat mere inches from your face and you are muttering under your breath for the hundredth time vile abuse based on your now firmly entrenched hatred of toads.

Armello originally released on PC and PS4 in 2015 but this is my first experience of it. In a way I am pleased because assessing this as a standalone title rather than a port meant I had no preconceptions about how this ‘should’ work. In terms of story it’s all relatively simple; the King has come down with ‘Rot’ and has changed from a kind and benevolent ruler to a brutal dictator; think of the change from Mufasa to Scar (I should mention that he is a lion). His subjects are now embroiled in a bitter conflict to become the next leader and can do so by accomplishing one of four possible paths to victory including those based on curing the king, prestige or outright merciless victory. It’s Game of Thrones, it’s the Wars of the Roses, it’s Redwall.

The mechanics are interesting. The game functions in a board game format using hexagonal tiles. In order to attain one of the four conditions for victory players must move around the board tactically toward their goals all the while utilising a system of cards and dice. A few years ago this would have felt like a departure from tradition, but recently (possibly even since Armello) there have been a proliferation of games using this kind of system. One of the best of this kind I have played recently was Prismata but I have to say that given time and patience Armello is a better all-round title and the gameplay system is both intuitive and appropriate. Of course the use of dice and cards does detract slightly from the feeling of being in total control of your strategy but I choose to view it as a positive; I could have the perfect plan going as expected in real life and then something unexpected happens that means I have to adapt and change to keep moving forward. It is this element of chance that you get from Armello and personally I felt that this was one of its best features.

Graphically this game is excellent. The art style and detail in the game really are suited to the Switch console and, though I did experience slowdown on the TV screen, in handheld mode it is one of the most pleasing games to look at that I have played. The music is non-intrusive and pleasant but doesn’t feel essential, I do wonder whether a bit more time could have gone into this aspect of the game to give it that fully rounded feel.

The game is available to play in both a single player mode (you vs 3 AIs) or online multiplayer and this is where it comes into its own. The quality of the online experience is exceptional. Playing against real people takes away the sometimes random behaviour of your opponents and makes this a true test of skill and subterfuge. I love the way that whilst waiting for other players to enter the game you are able to play a single player mode. This is such a great addition and means that you are completely in the frame of mind to play the game to the best of your ability when the time comes. I have seen others complain that the lack of a local multiplayer detracts from this aspect and though I agree it would be nice to play locally with others I don’t think this is a major issue. With the exception of Super Mario Party I can’t think of another game which uses the two screen table top mode with any great degree of success and part of the fun of Armello is the fact that people’s moves are entirely kept to themselves.

View some Armello screenshots in our gallery:

This is all very positive but what of the negative? Well I suspect that there will be many like me who pick this up and become frustrated quickly. The tutorial is useful but has a tendency to become annoying, particularly since the on screen text boxes frequently overlap. The card system is perhaps a touch too difficult to get your head around in the beginning unless you are a seasoned card gamer and the game feels as though it is stilted. There is so much lore and backstory which is hinted at in the card details that would have been great to see fleshed out into a more engaging storyline.

That said it didn’t detract from my enjoyment of the game. I have come full circle on this one in a way that hasn’t happened to me for a very long time. I would definitely recommend this to any strategy players and even those who have little experience. With Kingdom Hearts III on the horizon it only seems right to immerse yourself in more cute anthropomorphic characters only this time doing despicable, devious things.

Armello was reviewed using a digital code supplied by the publisher.

In this article:Armello, League of Geeks, PC, Steam