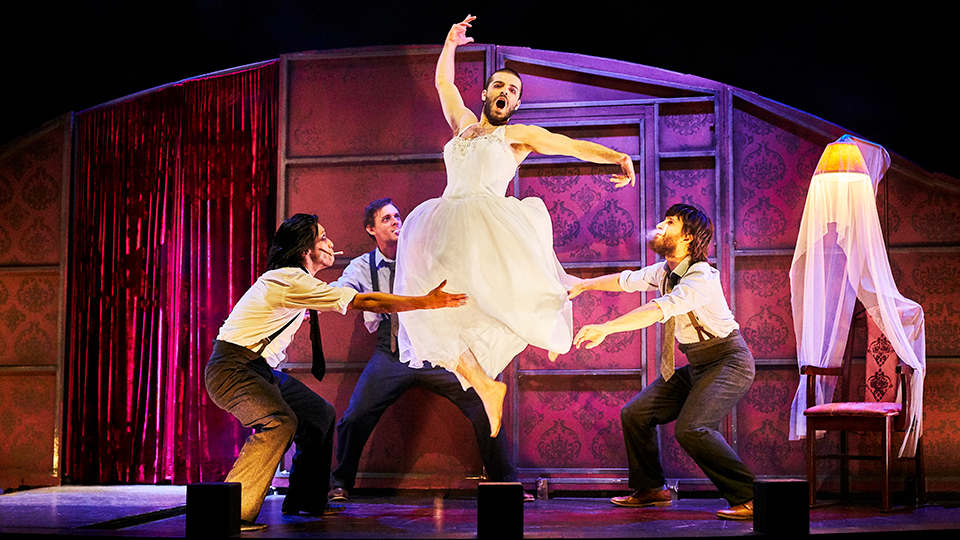 The Wedding sees the internationally renowned physical theatre company Gecko, led by Amit Lahav, undertake their biggest performance yet as part of the prestigious International Mime Festival at Barbican Centre. In addition, they’re also the first ever UK company to perform on the Barbican main stage at the festival. They rise to both of these challenges triumphantly with a piece of work which summoned an uproarious standing ovation from its audience on opening night.

The Wedding is a fraught and dynamic physical theatre piece which takes the familiar symbolism of marriage and tells the story of dystopian world in which our protagonists embark on a wedding – not to the one they love – but to society. They initially take to this matrimony willingly, finding themselves greeted with a shambolic yet very enthusiastic wedding party – before being unceremoniously packed off with a briefcase, provided a tie and sent off to fulfil their role in this society which though presented as timeless, feels very timely too. Naturally, with time, this conformity, begins to breed contempt and we watch the trappings of a revolution unfold.

The production plays fast and loose with language, one character says something in German, to which another responds in Spanish, or French or one of the many other languages articulated by this international ensemble of nine. The way the characters speak, is akin to a score composed of mumbling and bubbling noises which create a cacophony that even the most fluent multi-linguist would struggle to completely decipher. Any frustration this initially causes amongst the audience quickly dissolves and becomes liberating rather than stifling. Gecko hammer the point home about what a manacle language can be, while this sits comfortably in the frame of a mime festival, in a broader theatrical context Gecko’s approach is deeply refreshing in how clearly it shows that the English language is not the be all and end all – but rather just one many ways we can communicate to one another.

It follows therefore that this is a strategically sensory show. The designer Rhys Jarman, lighting designer Joe Hornsby and sound designer Jon Everett – are somewhat of a dream team creating the vivid landscape which acts as the spine of The Wedding’s taut narrative. Nothing in this production stays the same, the addition of one simple prop has the power to dramatically re-direct the audiences emotions and we find ourselves extremely focused on and invested in the unfolding action.

In one particularly unforgettable moment office cubicles are shuffled around on wheels, initially looking innocuous before, a change in beat and a flick of the lights transforms them into what looks like a confession box and then a tank even Houdini couldn’t escape. These blink of an eye transitions in which the familiar becomes sinister and uncanny typify how this production operates as a whole and yet none of these changes feel predictable within the drama itself allowing for emotional reaction after emotional reaction.

The relationship between the performers, the choreography and these various set pieces is totally symbiotic and the whole thing feels like a vivid pumping heart. This show grapples with difficult intellectual ideas about conformity and capitalism as much as it asks abstract questions about love and loneliness – it’s that rare production where the head is exercised just as much as the heart. So much of British theatre struggles to do either one of these, let alone both – Geckos success relies on something very simple: their work is accessible.The characters though mostly unnamed are well defined and relatable because Gecko cleverly use familiar tribal stereotypes; we notice the rebels, the weakest and the strongest immediately as though watching a wildlife programme. The movement is also easy to read and the transitions are solidly marked; the jovial climbing into the wedding dress at the start transforms into flailing arms escaping a straitjacket at the end.

Gecko allow us to see how quickly the dance of conformity shifts into a dance of descent – not to represent a society crumbling but a society capable of re-claiming it’s liberty and starting again. The audience stood up in a resounding applause at the end, there felt to be something in the air, not just clapping, but a cathartic clap back to the oppressive systems both in and outside the theatre – exciting times.