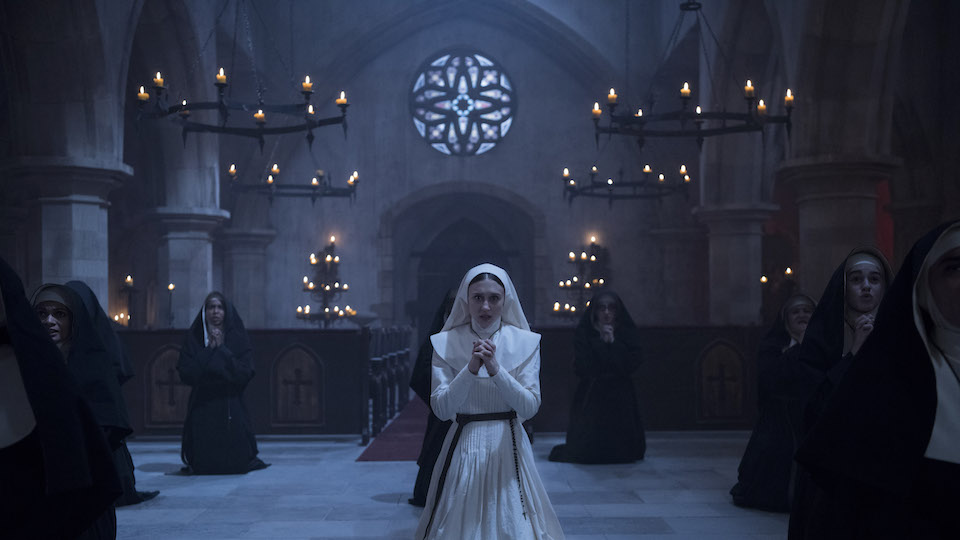 The Nun is the latest entry into the ever-expanding Conjuring franchise – one that has so far proven to be a very reliable (and very profitable) provider of things that go bump in the night. If you want entertaining, mainstream horror thrills and chills, The Conjuring and Annabelle films will – for the most part – deliver. The hard-core horror cognoscenti might disagree, but the truth is these films fill cinema seats, and then use every trick in the book to get you jumping out of them.

The Conjuring 2 in particular was notable for a subplot involving a demonic Nun. So effective and terrifying were these sequences, a spin-off was fast-tracked into production. Inevitably there is a whiff of cashing-in about The Nun, which veers a long way away from the ‘based on fact’ adventures of paranormal investigators Ed and Lorraine Warren. The film ties itself in knots to keep it connected to the parent franchise – which it didn’t really need to do – but for the most part The Nun is 96 minutes of harmless fun and atmospheric creepiness.

In the biggest departure yet from the Amityville/Poltergeist vibes of The Conjuring films, director Corin Hardy takes us into the dark heart of gothic Hammer Horror. The Nun is set in post-war Romania, at a bombed-out abbey deep in the woods, where a nun has committed suicide. The Vatican sends Father Burke (Demián Bechir) to investigate, and he takes a young novice, Sister Irene (Taissa Farmiga) to assist him. The strange thing about Farmiga’s casting, being that she looks exactly like her older sister (Vera – who plays Lorraine Warren in The Conjuring films), is that the film makes no connection out of this. It’s an odd choice, as you spend most of the film waiting to find out how they are related, only for it not to happen.

Once they get to the abbey, Hardy wastes no time in getting to the scares. There’s barely a single nun at this abbey that isn’t creepy in some way. To be frank, it takes some of the edge off The Nun herself/himself/itself. Sorry, reflexive pronouns are hard with demons. Blending the tried and tested (quiet quiet LOUD) formula of modern horror, with the more outlandish gothic vibes of Italian horror, and the mist-shrouded atmospherics of Hammer, you end up with something so intent on scaring the bejesus out of you, it forgets all the fundamentals of character and story. And as such, the scares have no impact. Sure, they make you jump and scream, but they are disposable. They won’t be haunting you days later, as you lie awake in the wee small hours.

Farmiga and Bechir are a likeable double act at the heart of this film, but some of the choices their characters make are right out of the Horror Movie Idiots playbook. For God’s sake stop splitting up and wandering around alone in the dark…there’s a fucking demonic nun behind you – is something you might find yourself shouting at the screen. Speaking of the titular Nun, Bonnie Aarons is fantastic, and has without doubt helped to create an iconic modern movie monster.

There’s no shortage of atmosphere at any point in the film, and Hardy brings a real style and confidence to The Nun. He is clearly relishing the opportunity to play in the realm of classic horror. The production design is beautiful, the sound design will send shivers down your spine, and there’s some terrific cinematography within the claustrophobic confines of the abbey. But it’s lacking the characters – such as the Warren’s and the Perron family from the first film – to really make you care, and make you feel that there is something at stake here. Without that all you have is a beautiful looking cheap thrill.

As well as 10-minutes of deleted scenes, the blu-ray release of The Nun comes with a few other special features that are worth your time. A New Horror Icon, is a 5-minute featurette serving as a brief behind the scenes piece, as well as a celebration of this character. Next up on the disc is Gruesome Planet, another short featurette focusing more on director Corin Hardy, the terrifying real locations they used, and what it was like shooting in deepest darkest Transylvania. There’s also The Conjuring Chronology, revealing how all these films link together. With more sequels and spin-offs coming soon, I think it would be fair to say that James Wan and his collaborators are on their way to building the MCU of horror.