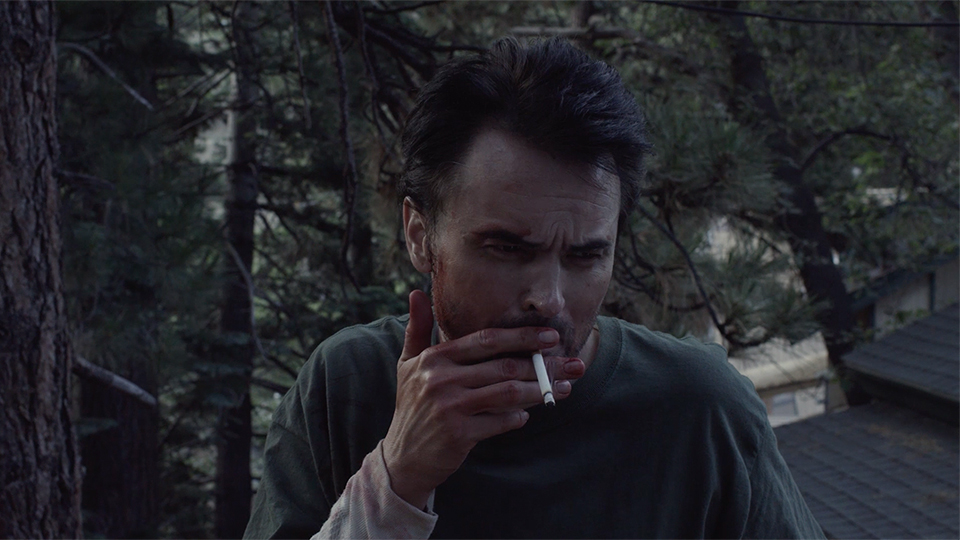 Drug addict Brian Barnes (Clint Carney) travels to a remote house in a rural mountain town in an attempt to get clean. As he waits for his friend Anna (Jaymie Valentine) to arrive and help him, Brian becomes uncomfortable when the local sheriff (Kelton Jones) keeps appearing everywhere he goes. Experiencing some disturbing hallucinations, Brian starts to wonder if he’s suffering from withdrawal or if there’s something more sinister going on.

Dry Blood is written by star Clint Carney and it’s his feature film debut as both an actor and a writer. Kelton Jones, who plays the sheriff, is also the film’s director and it’s clear the project is a labour of love for both men. Even though the film is only 83 minutes long, it takes quite a while to get going taking its time to set up the eerie premise. Some viewers may find themselves reaching for the stop button as it’s not all that exciting to begin with. Brian travels to the house and a few weird things happen but there’s not a great deal to get your teeth into.

Things worsen when Anna shows up. Firstly she’s wearing a very over-sized and distracting wig for no apparent reason. It’s so obviously a wig that it’s all you can focus on when Anna appears on screen. Secondly actress Jaymie Valentine’s performance is very, very ropey. She delivers her lines as if they’ve come as a shock to her and there’s about as much realism and passion in them, as the wig she wears. Unfortunately she really drags the film down and her chemistry with Carney is non-existent. Had a better actress (with her own hair) been cast, the film would likely have been better.

Once you slog through the first 45 minutes or so, Dry Blood does pick up. As Brian seemingly takes a one-way trip to crazy town, a twist comes in and it’s actually pretty horrifying. It’s a climax that’s worthy of better material than what came before it but regardless it packs an impact. The events that happen in the final 30 minutes will likely stay with you and there’s one moment I struggled to get out of my head once the film finished.

Clint Carney is solid enough as Brian. He’s stronger at the crazier scenes in the film and struggled to convince during some of the quieter and more emotional moments. Kelton Jones has a lot of fun as the meddling sheriff and he adds a little levity to an otherwise dark and downbeat film.

Dry Blood has plenty of ideas but it doesn’t always know how best to execute them. It’s a real shame because the last half hour is actually pretty strong. With some poor casting choices, some unconvincing special effects and that damn wig (yes I’m still not over it), Dry Blood has too much detracting from it to be a truly decent film. Carney’s story is compelling enough and Jones’ direction is fine but Dry Blood doesn’t reach the potential it should have.