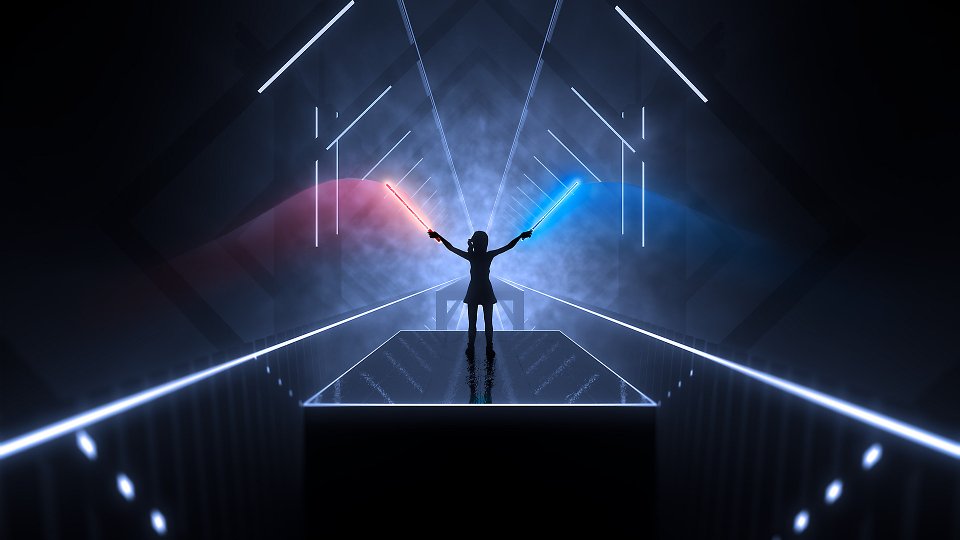 Beat Saber is a VR rhythm game from Czech indie game studio Beat Games. The developer has been working on the game since 2016 and brought it to Steam Early Access in May 2018 with support for HTC Vive, Oculus Rift and Windows Mixed Reality. The game has now made its way to PSVR and that’s the version I’ve been playing for this review.

If you’ve never heard of the game, imagine playing a game like Guitar Hero but with lightsabers! That’s how it was described to me and I immediately wanted to play it. If that sounds fun to you too then you might as well go ahead and buy yourself a copy because I can pretty much guarantee you won’t be disappointed.

The core of the game is very simple. You stand (or sit) on a platform while dual-wielding lightsabers. In your left hand is a red saber and your right hand is a blue saber. Just waving them around in VR is incredibly cool and makes you feel like some kind of Jedi Master. Back in the real world you’re actually holding the PS Move controllers and being tracked by the PlayStation Camera. Your arm movements are accurately translated to the game and a nice touch is if your sabers touch there’s an explosion of particles and your controllers vibrate.

As techno music blasts into your ears, small cubes fly toward you. These represent the beats of the music and your job is to slice them up. The cubes are red or blue which correspond to your sabers, so for example a red cube needs to be cut with the red saber in your left hand. Cubes can be straight in front of you, above, below or off to one side. Slicing through them requires you to swing your arm correctly so your saber cuts through them.

To make things more interesting the cubes have arrows on them. These represent the direction that you must slice through the cube. So an arrow pointing up requires an upward swing, while an arrow pointing right requires a swing from left to right. The game has a variety of difficulty modes which influence the speed of the cubes, how many there are and also how difficult they are to cut.

Slicing a cube correctly gives you points toward your total score and builds your combo. Should you miss a cube entirely or cut it incorrectly then you lose your combo. Cutting cubes correctly also increases your energy which is depleted should you make a mistake. Lose all your energy and it’s game over. A further influence on your score is how accurately you’ve cut a cube. For the best score you want to properly swing through the cube and also cut it perfectly in half in the direction give.

Things start off simple but new elements are gradually introduced. As the difficulty ramps up you’ll find that cubes might rotate on their way to you. There are also obstacles such as bombs to avoid cutting and walls that you need to duck below or lean out of the way of.

The default way to play Beat Saber is stood up and that gives you quite the workout. It’s important to ensure that you have enough clear space around you to make sure you don’t hurt yourself or destroy your possessions when things get frantic. If you’re less mobile then the game also works very well seated and there’s an option to change the floor height to accomodate this better. I’ve tried both configurations and enjoyed the game just as much.

There are some timed-exclusive content in the PSVR version. The first is the inclusion of five new songs. The second is a full campaign mode where you make your way along branching paths of levels. Here you need to beat a level in order to be able to continue along your current path.

My biggest concern before I played the game was that it would get boring or repetitive. I took the PSVR headset off after my first session and was shocked to discover that four hours had passed! Afterwards I found myself thinking about the game and it wasn’t long before I was back in for another session. The only real issue I had was occasionally going out of bounds with my movements but I think this was mostly my fault rather than the game.

View some Beat Saber screenshots in our gallery:

While there’s a limited amount of songs on offer I found there to be plenty of content. The included music is fantastic but the developers are hard at work on new music packs. These will expand the game and help keep it fresh. Replayability is added thanks to the different difficulty levels and the many modifiers on offer. The modifiers make levels more challenging by adding things like no fails and the incredibly difficult disappearing arrows.

In addition to the campaign mode, Beat Saber lets you practice levels, including the ability to slow down the action or even start on set parts that are giving you trouble. There’s also a party mode to compete with friends, global leaderboards and a one saber mode.

Beat Saber is easily one of the most addictive VR titles that I’ve come across. It’s a simple concept that is executed to perfection. The result is an addictive game that you’ll keep coming back to for a very long time. If you’re a fan of musical games like Guitar Hero or Dance Dance Revolution then you’re going to love it. I’d also highly recommend it to anyone who loves competitive games. If you’re looking for a reason to justify your PSVR purchase then make sure you pick this one up.

Beat Saber was reviewed using a digital code supplied by the publisher.