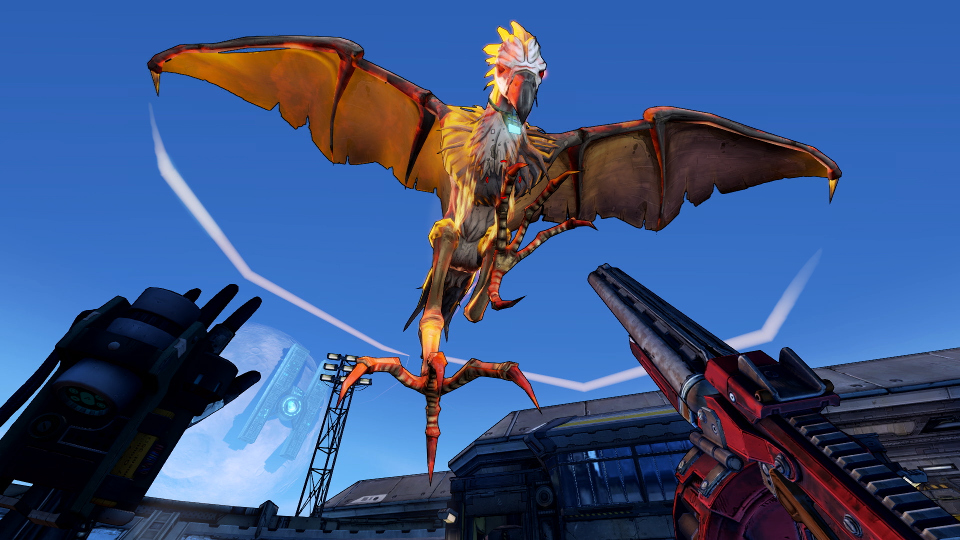 VR is always seen as a gimmick. Like Kinect before it, its time has come and gone and the majority of PSVR units are sat collecting dust on a shelf. It’s a shame since there are some excellent titles on there and some of them showcase the potential for the future of the format. Let’s see if Borderlands can convince you VR is worth it.

For those who have never played the game, Borderlands 2 sees you as a Vault Hunter. Your task is to break into a vault of treasures before the evil Handsome Jack gets there first. The game is presented in a comedic way and only occasionally gets serious. The story itself is simple enough and the side quests flesh out the world decently. The game is more about one liners and jokes and they hit more than they miss. The script is excellent from start to finish and the voice acting is equally excellent. VR users get some extra lines of dialogue as an added bonus.

Borderlands is a first person shooter, with emphasis on looting. There’s a seemingly infinite amount of guns to choose from and they all do various types of damage. It has a lot of RPG elements with a perk tree for each of the characters you choose to play as. These perks can be absolutely devastating and are all fun to use. While the main quests are good, the side quests are what make this game great. They offer a decent bit of variety but are all resolved with guns. Asides from some shaky vehicle sections, there are hours and hours of character building fun to be had.

This VR version has some changes. Control-wise you can use either the DualShock controller or the Move controllers, with no support for the Aim controller. Using the DualShock, you use your head to aim and fire as with any FPS. There was a problem with hit detection, something some VR titles suffer from. To make up for this an added “BAMF” system (Bad Ass……you can guess the rest) is put in place. This momentarily slows down time, allowing you to line up those tough shots. It’s a nice addition and coupling it with your powerful abilities can lead to an empowering feeling. Movement is generally quite good but there are some exclusions in the control scheme with the removal of the sprint and crouch button. It’s a minor inconvenience but on the whole, Borderlands suits VR very well. To reflect this, a plethora of comfort settings are available.

Borderlands uses a cel-shaded art style. Characters generally have a lot of detail but environments don’t. It looked decent before but works well in VR. Since it’s not taxing on the system you keep all of the visuals intact. Running on a PS4 Pro, it looks almost identical to the console release. The sense of scale and draw distance are excellent and bring you into a world you may have spent hundreds of hours in, it’s really cool. The only really minor issue is character scaling, as with some VR titles, Borderlands makes you feel a lot taller than other characters even when stood side by side. It’s hardly a problem but it’s something noticeable. On a gameplay front, the frame-rate is pretty good with some minor dips when there are a lot of particle effects.

View some Borderlands 2 VR screenshots in our gallery:

There are two major issues with this release though. The first is the removal of co-op. Borderlands is a co-op game, the large environments feel empty when you are alone and the race to the best loot after a fight is lost when playing solo and some enemies feel like bullet sponges. This is a big thing to remove but if you’ve never played it before or only ever played solo, it’s not a feature you’ll miss. The other issue comes in the form of its DLC, or lack thereof. There are many large and small DLC packs available in the console and PC versions, but none are supported here. This can be forgiven since porting content to VR is an expensive challenge. Another side effect to VR is that the cutscenes are played on a flat screen with black emptiness around them, anyone who’s played VR knows what to expect. There’s no real work around for this so it’s easily forgiven.

Let’s just say you’ve got a shiny new PSVR and a copy of Borderlands 2 VR, should you be happy? Yes, is the short answer. It’s an excellent VR title with a ton of content and it plays very well. Are you someone who’s played this before and also played a lot of VR games? It’s still worth the asking price, bearing in mind there is no co-op or DLC. The exclusion of co-op is a hit to the game but even without it, it is still a funny and entertaining game with great combat and VR support. It’s time to dust off your PSVR and get lost in Pandora.

Borderlands 2 VR was reviewed using a digital code supplied by the publisher.