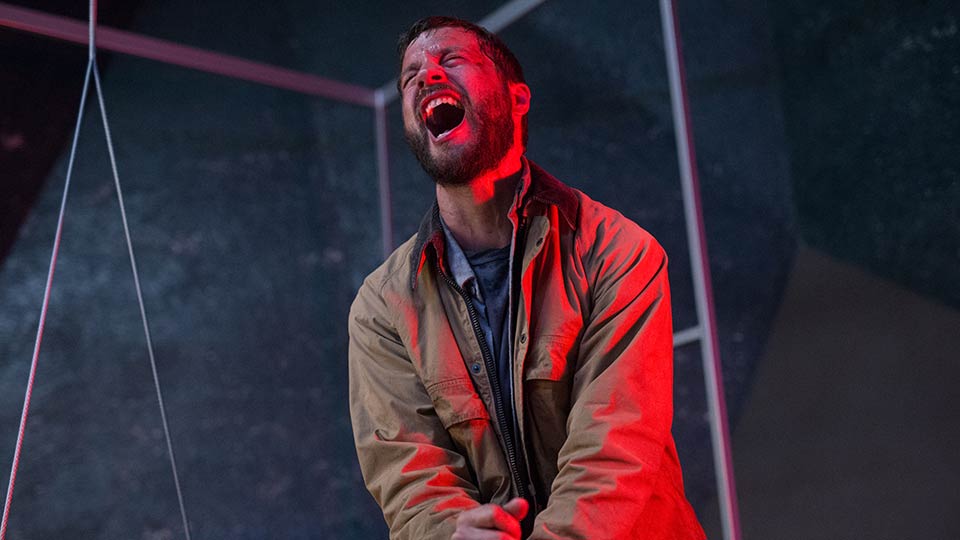 Upgrade, the latest film from writer-director Leigh Whannell (co-creator of the Saw and Insidious movies) imagines a near-future society where technological advancements have created an almost utopian society for the rich, but the poor are being left behind to rot. Playing very much in the same sandbox from which Paul Verhoeven built Robocop 30-odd years ago, this cyber-punk satire is a blast of old school 80s fun, bursting with ideas, and generously sprayed with extreme violence.

Logan Marshall-Green plays Grey, one of the few old school people left. He works for a living as a mechanic, specialising in restoring classic muscle cars, which he sells to rich collectors. One of his customers is the tech genius billionaire Eron Keen (Harrison Gilbertson). When their self-driving car malfunctions, and crashes Grey and his wife Asha (Melanie Vallejo) in one of the old, crime-ridden neighbourhoods, they are attacked by a vicious gang.

Asha is murdered in cold blood, and Grey is left paralysed from the attack. In the aftermath, Grey is approached by Keen, who wants to trial an experimental treatment on him. This involves implanting an artificial intelligence into his spinal cord. This cures him by taking control of his paralysed body, and upgrading him.

With his body and brain now super-powered, this all sets up as a fairly straightforward revenge movie, but Leigh Whannell has a few tricks up his sleeve. Stylish, silly, and shit loads of fun, Upgrade blooms into a complex conspiracy involving giant tech companies, mercenaries with surgically implanted guns in their arms, and tech implants in their brains. It’s all very 80s, and very cool.

There are some lovely stylistic choices, especially in the fight scenes. Cinematographer Stefan Duscio used an innovative iPhone steadicam rig attached to Logan Marshall-Green, emphasising his movements, and adding a kind of robotic feel to the fight choreography. It looks great, and along with the terrific sound design, and the fantastically brutal violence, it’s a real assault on the senses. But in the best possible way.

The film’s secret weapon however is Logan Marshall-Green. Unfairly dubbed in some quarters as the poor man’s Tom Hardy, he comes into his own in Upgrade. His performance as Grey is brilliantly fun, and fully committed to both the physical brutality of the role, and the absurd comedy. If you gave me the choice of watching Upgrade again, or the similarly plotted, Hardy-starring Venom, it would be Upgrade every single time.

Upgrade will play very well with the generation who grew up in the video era, when satirical sci-fi and body horror were all the rage. It’s the kind of film that doesn’t get made all that often these days, and when one comes along that is this good, it’s a real treat. Fans of Carpenter, Cronenberg, and Verhoeven will be delighted.

The only disappointment – and this is nothing to do with the film – is that it is being given the most bland release here in the UK. There are no special features at all on the disc, and even more egregious, it is not getting a blu-ray release over here either. So if you want to see it in HD (which of course you do) you will have to buy a digital copy. Another kick in the teeth for fans of physical media.