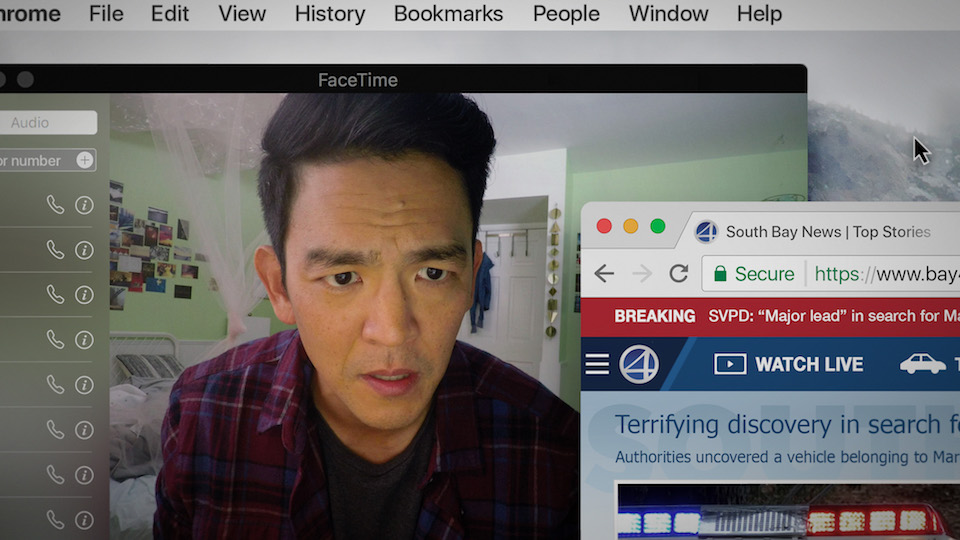 I missed Searching when it hit cinemas last year, but in all honesty, I don’t think I missed an essential theatrical experience. This is a film that was made for new technology, and I personally feel that the most immersive way to experience Searching is on your Smart TV, laptop, or tablet. And that is not a statement I make lightly. The entire film – which is a missing person thriller – plays out on the static screens of laptops and tablets. Yet within those narrow narrative confines, it succeeds as both a fast-paced thriller and a critical examination of the way we consume media.

Starting with an old Windows home screen, first time director (and former Google creative) Aneesh Chaganty introduces us to the Kim family, in a terrific, character driven montage. Quietly evoking the opening sequence from Up, we meet David (John Cho), Pamela (Sarah Sohn), and their daughter Margot (Michelle La), and we experience the joys and heartbreaks of their lives, through the photos, videos, and memories they have saved on their computers. It also serves as a neat little history of the internet.

When Margot doesn’t come home from school, and stops replying to her Dad’s messages, she is reported missing. He then starts trawling through Facebook, texts, and emails, to try and locate her. Chaganty and co-writer Sev Ohanian’s innovative script keeps all of this contained within David’s computer screen. I mean, I hardly ever use FaceTime, but I’m willing to accept that other people use it so often that their webcam is permanently on. But even with this extremely narrow scope, Chaganty clearly understands the emotion that comes from what you see on the screen of your device. Even the most unassuming images, such as a blinking cursor, or the three text message dots are imbued with tension and drama. See also: Personal Shopper by Olivier Assayas for another prime example of this.

So is it a storytelling gimmick, or a new addition to cinematic language, in the same way “found footage” became its own genre? Right now, I would argue it is still a bit gimmicky. So the challenge for the filmmakers is how to make that gimmick work, and how to maintain it without losing momentum or straining credibility. Think of films such as District 9 and Chronicle, which both completely abandoned their stylistic concepts in the final act. Searching just about manages to hold on, with only one proper “oh come on!” moment. But you forgive it, because that moment (which would be a spoiler to reveal) is incredibly dramatic, and Torin Borrowdale’s music is amazing, and it just works like gangbusters.

At the heart of the film is John Cho, bolstering the suspense with a powerful and heart-wrenching performance. It is all the more incredible that Cho, Michelle La, and the brilliant Debra Messing (as the police detective assigned to Margot’s case) deliver such strong performances, considering the unique way the film was made, and the logistical weirdness of delivering all of your lines to a webcam. There is more about this on the blu-ray extras, as well as a terrific, albeit brief behind the scenes documentary, and a lively filmmaker’s commentary with Aneesh Chaganty and Sev Ohanian.

The film doesn’t really tell us anything new in respect of online versus irl identities, and the way in which the internet has opened up all new ways for us to be whoever we want to be. However, it is never anything but thrilling. As the plot twists and escalates, the virtual apparatus of the internet that have hidden Margot from her Dad, are put to use in order to track her down, using online campaigns, trending hash tags, and viral content. Then Chaganty brilliantly shows how this can be warped and subverted, with grotesque narcissism and “virtue signalling”, as random do-gooders become “internet famous” whilst Margot remains missing, and almost becomes a footnote in the rapidly changing content of the 24-hour news cycle. You could easily argue that Searching is a film that will not age well, but right here right now, it is hitting the zeitgeist bulls-eye.