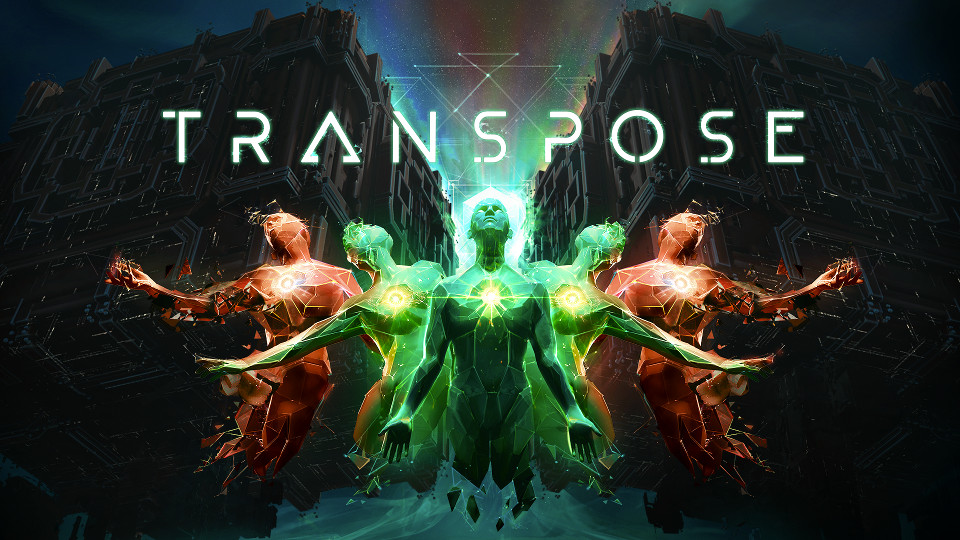 Transpose is a surrealistic VR puzzle game developed by Secret Location. It’s available for PlayStation VR (PSVR), Oculus Rift and HTC Vive. I’ve been spending some time with the PSVR version for this review. The game requires the PS Move controllers and PS Camera in order to play.

Set in a dreamlike world, Transpose tasks the player with solving increasingly complex puzzles. The action is viewed from a first person perspective. Things start off rather simple as you learn to move. Holding the left Move button down makes your avatar move forward in the world in the direction that you are facing. This works well and small adjustments to your path can be made simply by rotating your head.

The Square and Triangle buttons can be used to turn left or right. This is becoming more standard in VR games that can be played while seated but feels a bit alien until you get used to it. The right Move button can be used to teleport short distances. You can actually aim with your right arm before you teleport to make sure you end up where you want to go.

Watch the Transpose reveal trailer below:

After a little practice, the movement becomes second nature. Being a first person game really makes it feel like you’re present in the world. The different levels look really good and it’s great to look all around as you figure out what to do next. If you’re not keen on heights (like me) it can set your tummy off as you look over ledges and it gives you a falling sensation when you step off.

The puzzle elements of the game are slowly introduced as you progress. Much of these involve transporting cubes that are used to activate different control panels. Doing so opens up portals to different levels with the ultimate goal being to power up a mysterious and ancient machine.

Transpose has some neat puzzles that really test your spatial problem solving skills. You need to take in your environment, plan ahead and time your actions too. Eventually the game requires you to control time and manipulate gravity in order to succeed.

The key feature of the game is something called Echoes. When you come across an echo you need to rip out it’s power core. Each echo collected is represented in game by a bracelet on your right arm. An echo is able to record your in-game actions in real-time. After performing a sequence of movements you can choose to save them to an echo or discard it.

It’s impossible to solve most puzzles on your own without the use of these echoes. An early example requires you to climb to a platform, grab a cube and throw it back to the starting platform. You save this sequence to an echo, then reset time and use your next echo to catch the cube when your former self throws it. Then you repeat the sequence with another echo to a different platform to thrown back a different cube. It sounds rather complex but it actually makes a lot of sense while you’re playing.

When you’re watching an echo play back it happens at the same speed that you performed the movements. To make this more bearable you have a slider on your left arm that you can drag to speed up the playback of echoes. This does help but eventually I found the faster speed to still be too slow.

View some Transpose screenshots in our gallery:

The other thing I found really frustrating were puzzles that required me to throw cubes. This is done by making a normal underarm or overarm throwing motion and then letting go of the grab button at the right time. Initially I couldn’t land a single throw and rage quit the game. After some advice from the developers I modified my setup so the camera had a better view of my throwing motions.

While changing my setup did help I still struggled to get throws to land where I wanted them without many repeated attempts. I found this incredibly frustrating and eventually it spoiled some of the enjoyment of the game. The worst bit is when you’re watching your echoes back and you have to relive every terrible attempted throw, over and over again.

Overall, Transpose is a clever puzzler that makes good use of VR. Despite my frustrations with throwing cubes I enjoyed my time with the game. Anyone who enjoys a mental challenge and games like Portal should be sure to check it out.

Transpose was reviewed using a digital code supplied by the publisher.