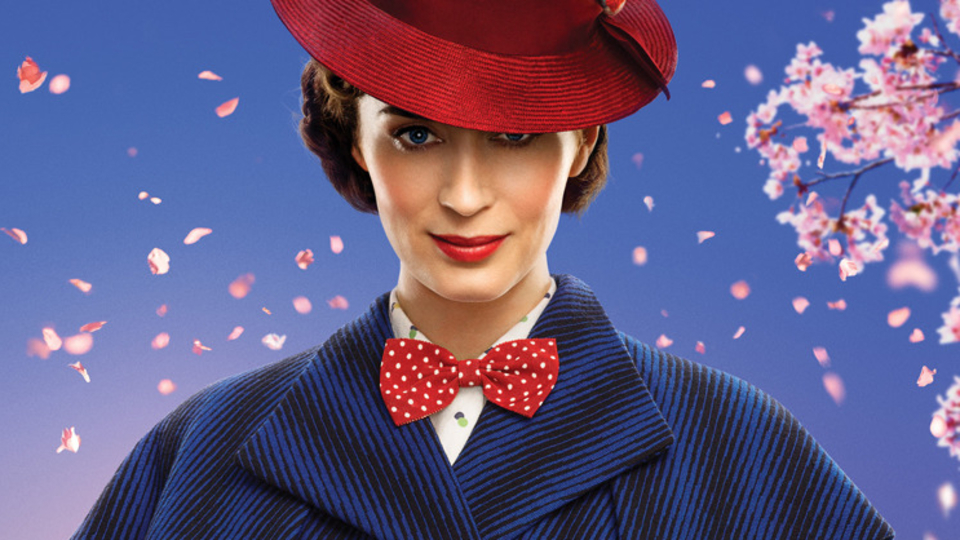 Revisiting the world of the beloved classic Mary Poppins was a risky move. However with Emily Blunt steering the ship this was always going to be a success. Mary Poppins Returns is a family film very much in the mould of the original, with sparkling set-pieces, toe-tapping musical numbers and a throwback to classic animated/real life dance numbers that perfectly echo the original and give new audiences a spoonful of Disney magic that’s deliciously inspired by yesteryear.

The plot of the film involves the Banks children who have now grown up. Michael (Paddington’s Ben Whishaw) has three children Anabel (Pixie Davies), John (Nathanael Saleh) and Georgie (Joel Dawson) but the family are struggling through some hard times after the loss of their mother. Thankfully Michael’s sister Jane (Emily Mortimer) is on-hand to help out, as is their quirky housekeeper Ellen (screen legend Julie Walters).

With bills mounting, Michael is close to losing the house unless he can clear a hefty loan in under a week. Thankfully he remembers that his father had shares in the bank, and that money would certainly cover the cost. But where is the paperwork? As they frantically search for it, a familiar sight descends from the skies – Mary Poppins (Emily Blunt – A Quiet Place) has returned to help out the Banks family in their time of crisis, and soon gets to work looking after the kids with her unusual brand of magical wonder.

Mary Poppins Returns hinges on the lead performance of Emily Blunt, and she does a remarkable job here. In fact, she is so good that the film actually suffers by not using her enough, I feel. Blunt is simply wonderful as the nanny sent to save the Banks family once again. She brings a stern charm to the table that will have you smiling from ear to ear, and has some truly hilarious dialogue too. Blunt really impresses in the musical numbers too, delivering a powerhouse performance that always enchants and delights.

Musical king Lin-Manuel Miranda was inspired casting as Jack, who is the local street lamp-lighter who has a crush on Jane. Speaking of Jane, Emily Mortimer is always a joy to watch and she brings warmth to her role as the children’s aunt that’s simply lovely to see unfold. The children all do well too with little Georgie a particular crowd favourite. Joel Dawson delivers an infectiously sweet performance and is frequently at the centre of all of the best scenes with Mary Poppins. Ben Whishaw is very charming too, and gives the role of Michael some true heart and soul.

The rest of the supporting cast are all great too with Colin Firth stealing his scenes as a devious bank manager looking to repossess the Banks family house. He clearly has fun with the role and is always watchable, as is Meryl Streep (a Rob Marshall favourite) who pops up for an energetic cameo as Mary Poppins cousin Topsy. Have you ever seen Julie Walters give a bad performance? Didn’t think so… and she dutifully obliges once again in a role that certainly echoes her stellar performances in the Paddington movies. David Warner, Jim Norton, Kobna Holdbrook-Smith and Jeremy Swift are all on-hand to help too, with screen legends Dick Van Dyke and Angela Lansbury getting a audible cheer from the crowd during their late cameos in the film.

Director Rob Marshall knows the world of cinematic musicals well having directed Chicago and Into the Woods, with Cats acting as his next major project. Marshall brings wide-eyed wonder to his film, and never misses an opportunity to go bigger and better with the musical numbers. John DeLuca and David Magee worked together with Marshall on the screen-story, with Magee adapting it to a screenplay. The collaborative effort is felt as Mary Poppins Returns seems to work best in its moments of grandeur. The mix of classic animation really does help keep the film rooted to the original too.

It’s safe to say that fans of the original will love this as it stays so faithful to the style of the Julie Andrews classic. However when the nostalgic dust settles I think the story could have been developed a bit further and I certainly would have used Emily Blunt far more than she appears onscreen as she was truly superb. Those minor gripes aside, Mary Poppins Returns is still a fantastic family film full of wonder and spectacle that makes for a wonderful festive treat.