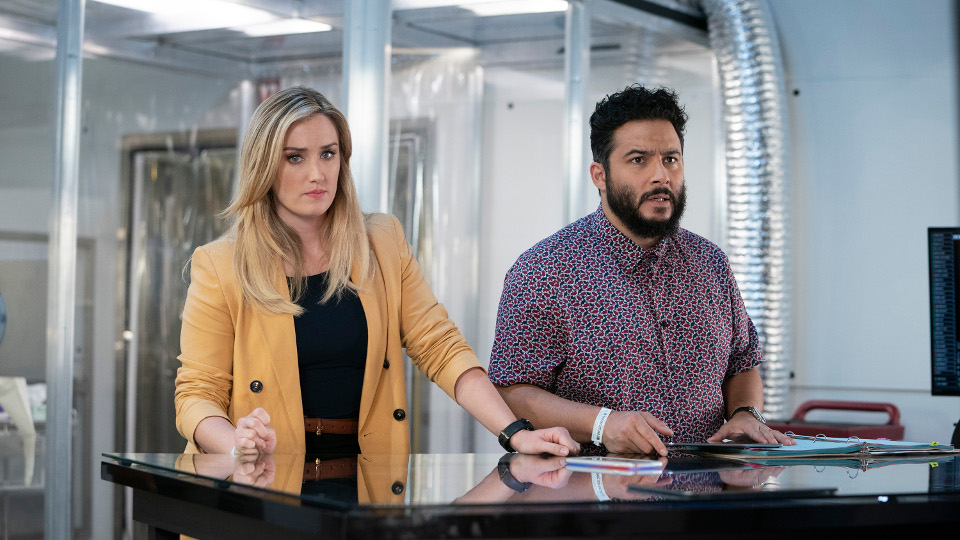 On the latest episode of Blindspot, a biochemical weapon was released inside the FBI.

The episode opened up in Amsterdam with Zapata (Audrey Esparza) being pursued around the streets. She was there on another mission for Madeline Burke (Mary Elizabeth Mastrantonio) but things had gone wrong. She eventually managed to escape.

Back with Burke, Zapata was introduced to new hire Claudia (Britne Oldford). Burke’s next plan is to get to Reade (Rob Brown) and use enhanced interrogation (torture) on him to get FBI information. Zapata looked conflicted about the mission and suggested that they break into his apartment instead to access his secure laptop.

Weller (Sullivan Stapleton) returned home to find Rich (Ennis Esmer) had broken into his apartment. Rich was cooking up a storm in Weller’s kitchen. He explained he had solved another tattoo which had given him a recipe so he thought he’d try it out. Weller took a look and recognised the recipe but said it had cream as an unnecessary ingredient. Somehow, this helped Rich work out that it was a cipher for a type of encryption and when applied to the recipe it gave them the address of an abandoned asylum.

At the asylum, they noticed a new door had been installed in a graffiti covered wall. They noticed a security camera watching them and someone behind the door began shooting at them through the wall. They returned fire and killed the man. Inside the room was a collection of creepy dolls that would fit right into any horror movie.

They took the dolls back to the FBI for analysis. Patterson (Ashley Johnson) brought in a specialist named Laurel (Stefanie Drummond) who worked for the DEA. She began analysis and when cutting open one doll it released a cloud of dust which put the FBI on lockdown.

Laurel took the brunt of the exposure and was quarantined. A specialist team arrived to handle the situation. The guy in charge injected Laurel with a chemical that he said would slow the effects of what she was exposed to. Rich tried to keep Laurel’s spirits up by cracking jokes and reciting episodes of Friends. A short while later she died.

Jane was also given the same chemical so a race against time began to stop her suffering the same fate. The team eventually worked out that the guy in charge of the specialist team was using the situation to test out other chemical weapons. Weller had Patterson get him inside and he injected the guy with the same chemical. This forced him to give up the antidote so Jane could be saved.

Elsewhere in the episode, Jane was constantly harassed by her hallucinations of Roman (Luke Mitchell). She needed the help of a hacker and called on Boston (Josh Dean). She told him that the FBI were recruiting elite hackers and he completely fell for it. He gave her a special device disguised as an ethernet cable to plug into whatever server they needed to hack.

During the lockdown at the FBI, Jane needed to plug the cable into one of the servers but there were too many people around. She used her skills of persuasion to make everyone paranoid about what was happening. It worked and they all ended up panicking and breaking out giving Jane the window she needed to attach the device. Later she returned to Boston and he gave her the files the device had retreived. She left him the laptop and said she’d be in touch about the next phase of the audition.

The episode also featured Weller’s ex, Allie (Trieste Kelly Dunn). She came to visit ask Weller had previous told her they needed to talk about Jane. Allie looked into the woman Jane met at the end of last episode but said she was clean. However, the way Jane had been acting had left her suspicious, particularly that Jane hadn’t tried to stop Weller entering the quarantined area to save her.

At the end of the episode, Zapata and Claudia broke into Reade’s apartment and found his laptop. However, as the FBI had been in lockdown, remote access had been disabled so Claudia said they would go back to the torture plan. Reade returned to his apartment and was jumped by Claudia. His training kicked in and he quickly subdued her but turned around to find Zapata stood with a gun to his head. Hopefully next episode we’ll get some answers about what she’s really up to?

Can’t wait for the next episode? Read our Blindspot 4×05 Naughty Monkey Kicks at Tree preview.