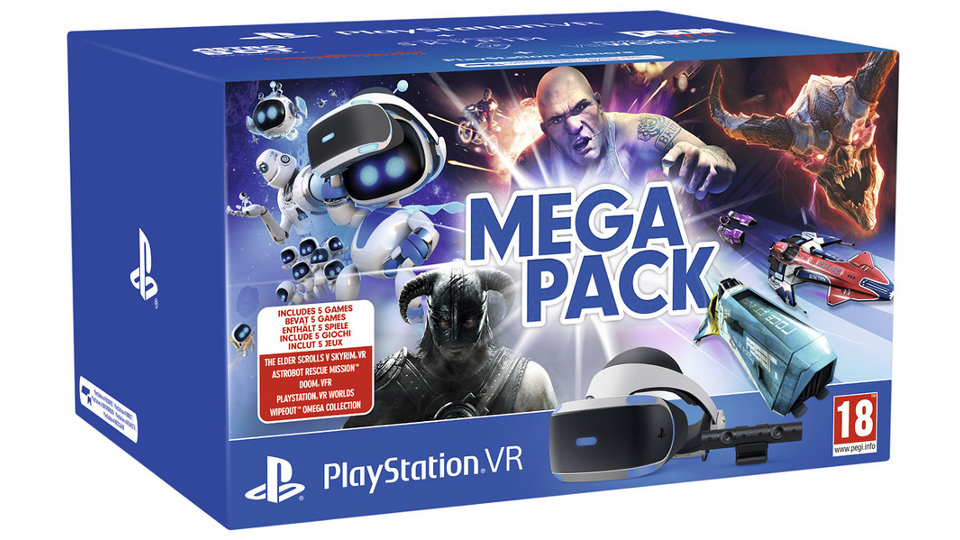 The launch of PlayStation VR made it possible for players to dive headfirst into fantastical worlds and experience immersion like never before. Now, Sony Interactive Entertainment have released the PS VR Mega Pack – a brand new bundle which contains everything you need to begin your virtual reality adventure!

Experience an adventure like no other as you set out with your loveable robotic pal to rescue his friends in this critically-acclaimed game. Move your head to peer around, below and above platforms as you guide Astro Bot to both his friends and a multitude of secret areas. Use your Dualshock 4 as a multi-tool gadget to battle bad guys and titanic bosses in a platformer in which you’re as active a participant as Astro Bot.

Read our ASTRO BOT Rescue Mission review to see what we thought of the game.

Rockets soar slower and are less deadly than WipEout’s range of anti-gravity ships. And the iconic futuristic racer has never been this enthralling, letting you roar through chicanes above the clouds and bullseye competitors (even in online matches!) from a unique cockpit view built especially for VR. With multiple comfort settings to make even the most speed-wary player feel the thrill of being faster than the Flash, this is truly the greatest way to experience the future of racing.

You’ll swear the air tastes sweeter as you breathe in the gorgeous open world expanse that is the mystery-filled realm of Tamriel. Head-tracking on the PS VR headset lets you freely drink in the sights – or pinpoint attackers – as you wander the quest-rich landscape. Live your best fantasy life and freely decide what role you take and where you go in Bethesda’s action RPG epic.

Bethesda’s thrilling sci-fi shooter greatest trick is in making you experience two opposing mindsets. One, fear-induced tension at being surrounding by escalating numbers of horrific demons intent on ripping you limb from limb. Two, complete badassery due to being fully, overly – unfairly – equipped and capable of dealing with it. With PS VR, Doom is more thrilling brutal than ever.

Under one roof is housed five wholly different VR experiences. Within PlayStation VR Worlds you can enjoy a diving adventure in Into The Deep, plunge down steep roads and duck traffic in VR Luge, battle against competitors in sci-fi sport Danger Ball, aliens in Scavengers Odyssey, or take part in a crime thriller with The London Heist.

In this article:PS4, PSVR, Sony