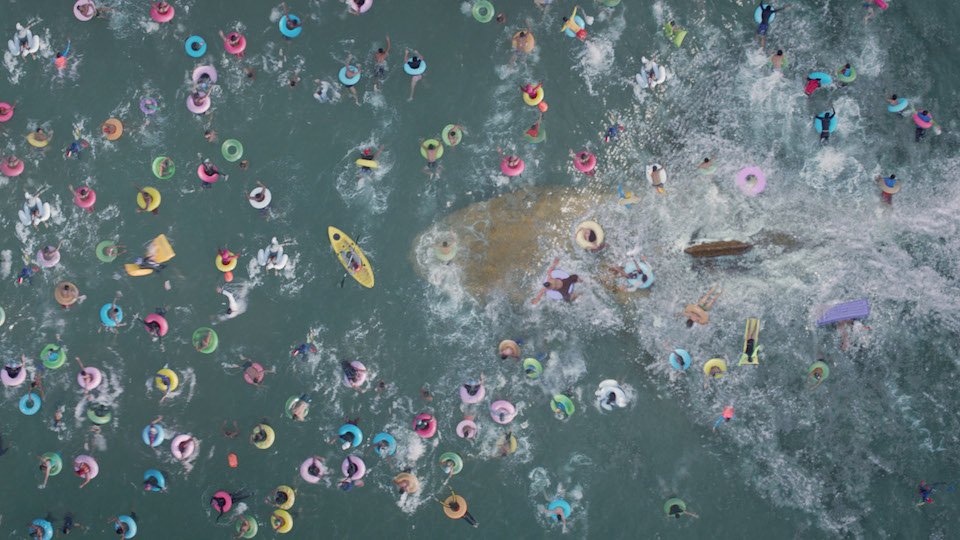 Bored of Bresson? Fatigued with Fellini? Tired of Tarkovsky? Drained by Dreyer? Of course you are. Film as a philosophical art form can only nourish the soul to a certain extent. Occasionally you need something more. We all do. And so how lucky we are to find ourselves living in a period of cinematic history that has given us The Meg – a film where Jason Statham fights a giant prehistoric shark. These truly are blessed days.

It may sound as if I’m being a bit facetious, but I assure you I am not. I genuinely enjoyed the hell out of this film. It received a bit of a critical pummelling when it hit the cinemas back in the summer, but I think expectations were just a little too high. I’m not entirely sure what people thought it was going to be, but when they saw the film was a tongue-in-cheek B-movie about a massive shark, they went ‘oh is that it?’ Well of course that’s it! What more do you want?

Adapted from the first of Steve Alten’s 6-book saga (yes that’s right – there are so far six books about this bloody big shark) The Meg sees Jason Statham playing Jonas Taylor, the world’s best deep-sea rescue diver. When a rescue effort he is leading goes tragically wrong, and he claims some unknown oceanic beast is to blame, his career and reputation are destroyed.

Years later in the middle of the East China Sea, at a technologically advanced research station funded by billionaire Jack Morris (Rainn Wilson), a team of oceanographers led by Dr Zhang (Winston Chao) and his daughter Suyin (Li Bingbing) are preparing to explore the deepest part of the ocean. They believe there is more to be found if they go deeper, beneath the Marianas Trench. Honestly, didn’t these fools watch Lord of the Rings? Do they not know what happens if you delve too greedily and too deep?

But alas, it isn’t a Balrog they unleash, but a Megalodon, a 75-foot prehistoric shark. All manner of chaos is inevitably unleashed, and with the crew stranded at the bottom of the ocean, there’s only one man they can turn to. Yep, you guessed it. It’s Jason bloody Statham. The rest of the international cast, featuring Cliff Curtis, Ruby Rose, Page Kennedy, and Jessica McNamee are all game, but none of them are having quite as much fun as Statham. He is clearly having a ball, and as always is a joy to watch.

Jon Turteltaub directs The Meg with minimal fuss. The action is clean, clear, and mostly entertaining. Giant shark versus little dog is a genuine high point. The whole thing however could have benefitted with being a little bit more frenzied and unpredictable. It’s all a bit safe. But I’m sure that was entirely intentional. If nothing else, The Meg was a film made to gobble up as much cash as possible. This is four-quadrant filmmaking on a global scale. There ain’t no room for macabre mayhem in that equation.

So where does The Meg land on the shark movie ranking? With Jaws in an unassailable position at the top of this genre, and the Sharknado movies occupying the dark, shitty crevices at the bottom, The Meg lands somewhere in the middle, near Deep Blue Sea. It’s not quite as entertaining as Deep Blue Sea, and doesn’t have anything as ludicrously wonderful as Samuel L Jackson’s “ice” monologue, but it does share some of that same bonkers high-concept energy. I guarantee in a few years, whenever it’s on TV, it’ll be one of those films you have to switch on and watch to the end.

So what do we get on the blu-ray for parting with our hard earned dollars? First up is Chomp on This: The Making of The Meg. This is a 12-minute featurette, and very much in the modern EPK style. There are a few clips from the film, but the majority of the running time is taken up with interviews with the director, the cast, and key crew. There’s also some behind the scenes footage. But rather disappointingly there is no contribution from the Stath.

Creating the Beast is an interesting 10-minute look at how the Megalodon was conceptualised and designed, before being brought to life by the visual effects wizards. Finally there’s a 2-minute piece about shooting in New Zealand, which is really just an advert for the New Zealand Film Commission. They must be missing all that lovely Middle Earth money.