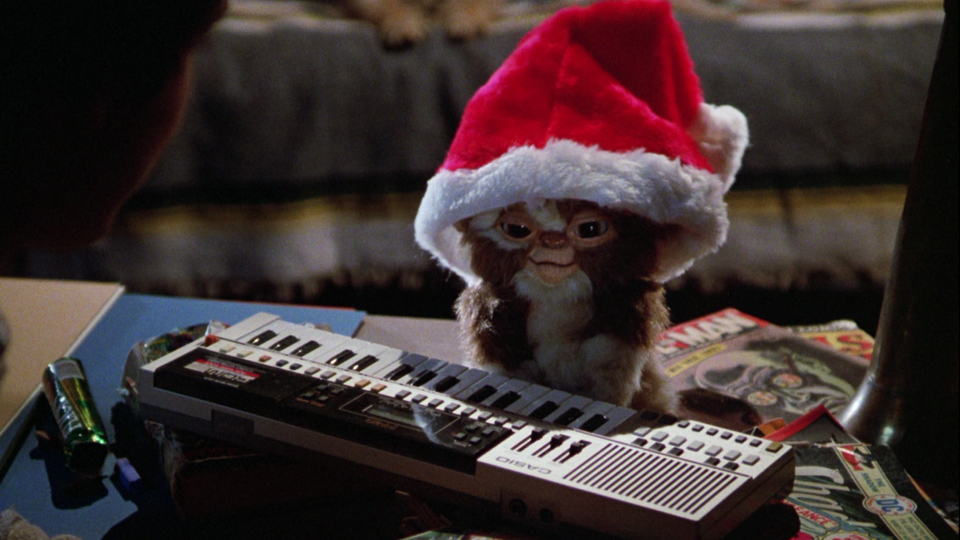 It’s almost Christmas! If you want a break from the chaos of organising your own festivities, there are plenty of classic movies to watch over the festive period, with many locations putting on special events to mark the occasion.

There’s something magical about the capital at Christmas time so here’s a list of some of the best film-related events that you can do in London. With plenty of great screenings in some very nice locations, there’s something for everyone, and all are sure to get you into the seasonal spirit.

Let’s take a look at the best Christmas film activities to enjoy in London.

The glorious surroundings of the Theatre Royal, Drury Lane will host the best rom-com Christmas movie of all time in a stunning live concert event. On Sunday 2nd December, the venue will come alive as a full orchestra performs Craig Armstrong’s enchanting film score. The film itself is a 5-star gem with Hugh Grant, Liam Neeson, Keira Knightley, Emma Thompson, the late Alan Rickman and a whole host of famous faces delivering a wonderfully feel-good experience. And London has never looked so festive in Richard Curtis’ affecting ode to Christmas in the capital. Tickets are available from all online theatre retailers but hurry, it’s almost sold out!

John Favreau’s timeless classic gets better with every passing year, thanks to an infectiously happy performance from Will Ferrell and the sweeter-than-pie Zooey Deschanel. Buddy the Elf has become a festive stalwart and it’s always a joy to revisit this feel-good gem. The Hackney Showroom in Hackney Downs hosts Pop Up Screens Christmas line-up this year which requires you to enter the cinema through a wardrobe and embark on an adventure through a snow filled forest to find the cinema. Titles include Elf, The Lion, The Witch and the Wardrobe, The Santa Clause and Arthur Christmas. Visit www.popupscreens.co.uk for more info and tickets.

The Prince Charles Cinema, so often the best kept secret in London, always knows how to deliver a great night out. Their line-up all year round is amazing but Christmas really brings out the classics. This year, they’ll outdo themselves again with a festive all-nighter comprising of The Muppet Christmas Carol, Die Hard, Elf, Gremlins, Home Alone & Home Alone 2: Lost in New York. If that lot doesn’t get you in the spirit, nothing will! Go to www.princecharlescinema.com for all the ticket details for this and other seasonal gems throughout December. Their festive slate is fantastic, with something for everyone.

Not content with ruling the summer film market, those clever souls at The Luna Cinema have been hard at work bringing The Luna Winter Cinema to the masses this December. They are delivering a great roster of seasonal classics to some gorgeous London locations – EartH (Evolutionary Arts Hackney), Kensington Palace’s Pavilion on the Orangery Lawn and the newly announced Alexandra Palace (which is sure to sell out fast as usual). Home Alone is the pick of the bunch because who doesn’t want to see Macaulay Culkin outwit Joe Pesci and Daniel Stern again? Head to www.thelunacinema.com to book this and other treats including Christmas mainstays like Elf, Love Actually and It’s A Wonderful Life.

Hyde Park’s Winter Wonderland has become a must-visit attraction in London over Christmas. This year Penguin Ventures have teamed up with Backyard Cinema to present The Snowman Experience. This brand new, world exclusive production celebrates the 40th anniversary of Raymond Briggs timeless story. But this isn’t a standard film screening – it’s a multi-roomed, multi-sensory adventure that’s a cinematic walk through experience. You will watch The Snowman film split up into different sections, set across separate experience rooms. Check out www.hydeparkwinterwonderland.com/attraction/the-snowman-experience/ to book tickets for this beloved classic.

Frank Capra’s classic is revisited more than any other movie over the festive period, with the film celebrating its 72nd year. James Stewart shines as businessman George Bailey, who learns what life could have been like if he never existed. The Union Chapel in Islington will host the film as part of their festivities, including a free mince pie and exclusive entrance for ticket holders to the Union Chapel Christmas Market. All proceeds raised will go to the Margins Homelessness Project, which is based at the Chapel. Tickets are expected to go fast so head to www.unionchapel.org.uk for more details.

This Christmas you can take a trip to the shores of an enchanted Frozen Island, thanks to the folks at Neighbourhood Cinema. You’ll be transported to a world of frosted palm trees, icicles and snow globes as you watch your favourite Christmas movies around a lake of ice, as snowflakes fall around you. It all takes place in-doors and in the comfy surrounds of Covent Garden! VIP snow cabins can also be pre-booked too which come with their own private screen and winter cocktails. Head to www.neighbourhoodcinema.co.uk for their full slate, which includes one of the best action movies of all time – Die Hard starring Bruce Willis! And yes, it most certainly IS a Christmas movie!

The pursuit of the ultimate family Christmas has never been funnier than this hilarious Chevy Chase outing. Full of belly laughs, a rampaging squirrel and Randy Quaid as a big-hearted relative from hell, join the Griswold’s once again for a truly festive treat. As mentioned before The Prince Charles Cinema has an eclectic roster of seasonal favourites this year, even if their Christmas all-nighter doesn’t appeal. Jingle All The Way, Scrooged, Lethal Weapon, A Christmas Story and The Muppet Christmas Carol are just some of the gems on their bill. For more festive offerings and to book tickets, visit www.princecharlescinema.com

Firmdale Hotels are hosting amazing Christmas screenings across all of their plush London sites this year, with White Christmas gracing The Soho Hotel, The Covent Garden Hotel and The Charlotte Street Hotel. Michael Curtiz’s seminal classic features four outstanding central performances from Bing Crosby, Danny Kaye, Vera-Ellen and Rosemary Clooney. Part of their legendary Film Club, you can enjoy the star-studded film in the luxurious confines of their private screening theatre. You can even combine the screening with one of their famous afternoon tea or dinner packages, making an unforgettable night even better. Check out www.firmdalehotels.com for all the info, which includes screenings of The Holiday, The Nightmare Before Christmas and Bad Santa too.

Add one star-studded rom com to the lush surroundings of St. Katharine Docks and you have a winter movie-going experience like no other. From the 3rd to the 9th of December, The Floating Film Festival resurfaces by the river and has a decent mix of classics for all tastes. Home Alone, Home Alone 2, Elf, Love Actually, Miracle on 34th Street and more make up their week of festive fun, but it’s the Kate Winslet, Jude Law, Cameron Diaz & Jack Black seasonal favourite that will close the event. Tickets, along with further details of the films showing can be found at www.skdocks.co.uk/whats-on/christmas-floating-film-festival.

One Aldwych – Miracle on 34th Street

The swish location of One Aldwych plays host to Curzon Cinema’s Festive Film & Fizz nights. Watch a seasonal treat in the hotel’s private screening room with a glass of champagne, and then head to their on-site restaurant for a three-course meal once the film finishes. This year’s programme includes all of the classics you’d come to expect, including It’s A Wonderful Life, White Christmas, Love Actually, Home Alone and of course, Miracle on 34th Street. This 1947 original by George Seaton never fails to raise a smile, with a young Natalie Wood, Maureen O’Hara, John Payne, Edmund Gwenn and Gene Lockhart on fine festive form. To book, click on www.onealdwych.com/food-drink/christmas/festive-film-and-fizz

Pirates of the Hidden Spirit

Ok this one technically isn’t a film screening event, but it clearly takes a whole heap of inspiration from the Pirates of the Caribbean movies for an interactive event of drinking and treasure hunting. Tasked with finding hidden rewards on a pirate ship docked by the Thames, guests must make their way through the clues and interact with the pirates, whilst sampling a selection of cocktails made for the occasion. With plenty of dates running throughout the festive period, this could be a unique and memorable way to see in Christmas, with more than a passing nod to Captain Jack and his pirate ways. For tickets and further information, check out www.thehiddenspirit.co.uk

Credit: Pirates of the Hidden Spirit

The hallowed Royal Albert Hall has always been a festive favourite in December and this year they are running a Christmas season that has a lot of variety. There’s a film screening of Home Alone, celebrations of The Snowman and Paddington and, of course, their customary Carol services but one new event for 2018 is A Hollywood Christmas – a musical celebration featuring scores from festive films like A Christmas Carol (1938), The Nightmare Before Christmas (1993) and Harry Potter and the Philosopher’s Stone (2001). With The Royal Philharmonic Concert Orchestra under the leadership of American conductor John Mauceri, December 19th should prove to be a memorable night for fans of film music. Check out www.royalalberthall.com/tickets/events/2018/a-hollywood-christmas/ for more details.

Harry Potter: Hogwarts in the Snow/Fantastic Beasts: The Crimes of Grindelwald

With Fantastic Beasts: The Crimes of Grindelwald in cinemas for the holiday season, it’s the perfect time of year to revisit all things to do with J.K. Rowling’s Wizarding World. The film features Newt (Eddie Redmayne) teaming up with a young Dumbledore (Jude Law) to try and end Grindelwald (Johnny Depp) and his masterplan of creating true-blood wizards to rule over the world. If that gets you reminiscing about Harry Potter, then you have to visit Hogwarts in the Snow as part of the Harry Potter & Warner Bros Studio Tour. Full of wondrous delights, their Christmas activities are amazing for the whole family to witness, including Hogwarts itself covered in snow for the festive period. www.wbstudiotour.co.uk has all the ticket prices and availability.

The most socially-conscious event on the outdoor film circuit, 100% of The Nomad Cinema’s profits go to their chosen charity, The Sustainability Institute in South Africa. Bad Santa, Elf, White Christmas, Die Hard, It’s a Wonderful Life and Rare Exports: A Christmas Tale are just some of the gems that feature in their eclectic line-up. The venue for this seasonal outing is Citypoint in the heart of London. Citypoint is a 36 storey landmark tower with plenty of retail and public space surrounding it, transforming the bustling area into a festive treat. Head to www.whereisthenomad.com/ for all the ticket details.

If you are a fan of Marvel you’ll love this new attraction that has just arrived at ExCeL in London. Marvel S.T.A.T.I.O.N (an acronym for Science Training and Tactical Intelligence Operative Network), is where guests can step inside the world of Marvel films and become part of the Marvel Cinematic Universe (MCU). With props, interactive games and lots of cool stuff on display, it’s a great way to celebrate 10 years of Marvel movies with the family. If you’re looking to do something fun and a bit different this Christmas, Marvel S.T.A.T.I.O.N offers some great wow moments for kids (and adults) alike who are obsessed with all things Marvel. Tickets are on-sale now at www.avengersstation.co.uk