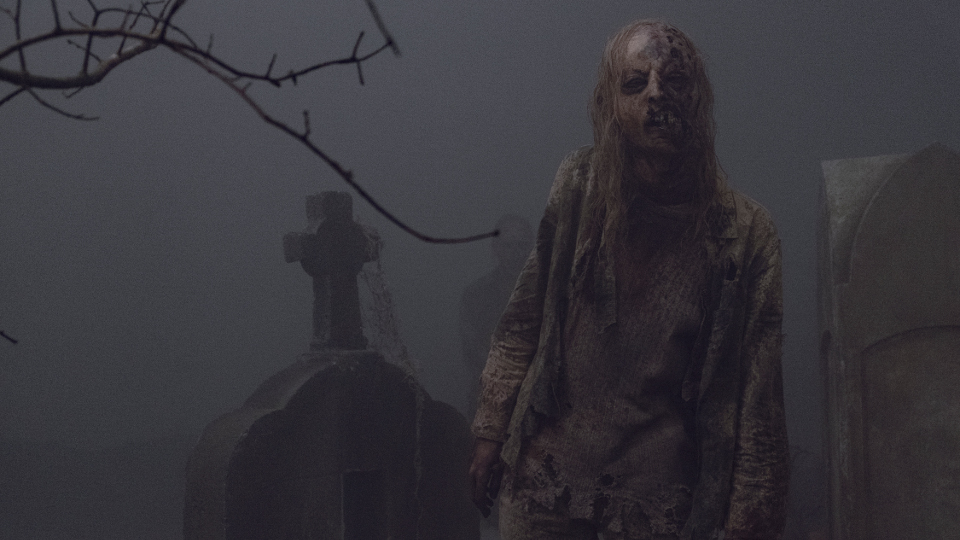 The Walking Dead finished its mid-season by introducing a terrifying new threat that now faces the survivors. It also saw the death of another main character.

A rescue mission comprising of Jesus (Tom Payne), Aaron (Ross Marquand), Daryl (Norman Reedus) and Dog headed out to find Eugene (Josh McDermitt). On the way they encountered an unusual group of walkers.

Later they found Eugene but also found themselves being hunted by this strange herd. Eventually the group ended up trapped in a cemetery that was covered in thick fog. They tried to fight the walkers off but one fought back and killed Jesus.

This wasn’t an evolved walker as speculated by the group but a new enemy known as The Whisperers. These are people who wear the skins of walkers, allowing them to blend in and travel with herds unnoticed.

The next episode is Adaptation. The group unmasks a disturbing and dangerous new threat. An escaped captive revisits his past.

Watch the The Walking Dead season 9b New Enemy trailer below:

The trailer begins with Michonne (Danai Gurira) arriving back at Hilltop with Daryl (Norman Reedus), Eugene (Josh McDermitt), Yumiko (Eleanor Matsuura) and Aaron (Ross Marquand). So it’s safe to say that these characters all survived the cliffhanger ending encounter with The Whisperers. Most importantly we can also see that Dog survived!

The group have returned with their horses and there seems to be two unidentified characters. Our guess is that the one at the back is the body of Jesus (Tom Payne). The one on Michonne’s horse looks to be a prisoner and our money is on new character Lydia (Cassady McClincy). She’s the daughter of Alpha (Samantha Morton), leader of The Whisperers. Another guess is that she was captured as the last Whisperer alive or that taking her allowed them to escape.

In the comics, Lydia became Carl’s girlfriend. As he’s no longer alive our best guess is that she gets together with Henry (Matt Lintz). The trailer continues with what looks to be a funeral, of we presume Jesus.

We hear someone, possibly Aaron(?), say “Now we know there’s a new enemy”. There’s a shot of the graveyard in the mist scene where Jesus was killed with a Whisperer saying “Now you die”. It looks like a fight does break out.

The next shot shows what looks to be a Whisperer or two stood watching Luke (Dan Fogler) and Alden (Callan McAuliffe). They also appear to be spying on Hilltop.

Lydia is heard to say “You’re more like us than them. You don’t belong with these people.” to Daryl as she is imprisoned. There’s also a shot behind someone walking through a crowd of what are presumably Whisperers. Our guess is that this is Alpha who’s approaching a gate and a different shot shows Daryl walking out to face her.

At Kingdom it looks like the fair takes place and Carol (Melissa McBride) is seen to tell Ezekiel (Khary Payton) that the fair could be their last chance. Carol is then shown creeping around in the dark with Dianne (Kerry Cahill), bows at the ready.

The next shot shows Tara (Alanna Masterson) marching out with Magna’s (Nadia Hilker) group. The have weapons at the ready and look like they mean business.

There’s a quick montage showing Gabriel (Seth Gilliam) and Rosita (Christian Serratos), then Michonne and Judith (Cailey Fleming), and finally Daryl. Siddiq (Avi Nash) is heard to say to Michonne “What does it mean for Alexandria to survive if the Kingdom falls?” she replies that “It means Alexandria survives”.

We then see Daryl going up against a Whisperer, possibly at the Kingdom’s fair? There also a closeup shot of a distressed looking Michonne taking a swipe with her katana.

The trailer ends with Negan (Jeffrey Dean Morgan) whistling as he arrives at what looks to be Sanctuary. As the trailer ends he says “Home sweet home”.

The Walking Dead returns to UK screens in February 2019.