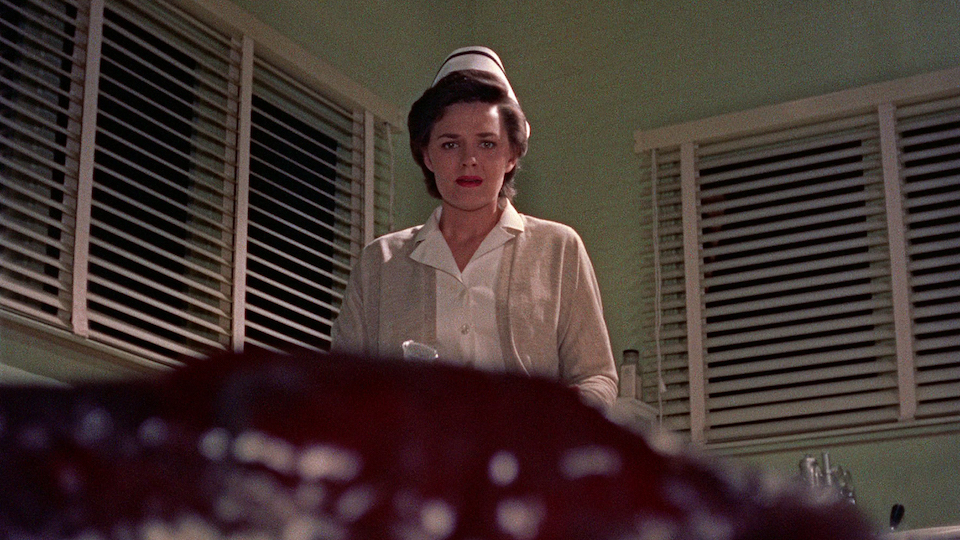 Before watching this Criterion Collection release of The Blob for this review, I was convinced it was a film I had seen before. But I quickly realised that wasn’t the case. I put it down to The Blob being one of those touchstone films of 1950s cinema, with so many familiar elements that are ingrained in our pop culture consciousness. From the famous movie theatre scene, the cheesy special effects, Steve “Steven” McQueen as the oldest looking teenager in the world, and of course the funky opening credits with the (uncredited) Burt Bacharach theme song.

Arguably one of the most enduring and memorable of the cult sci-fi horror B-movies of the 1950s, The Blob has always seemed like a film that was synonymous with being watched on old black and white box televisions. Seeing it here – as it was meant to be presented – in widescreen and glorious Technicolor is something of a revelation.

The film finds teenager Steve (McQueen, actually 27 but looking about 37) on a date with his girlfriend Jane (Aneta Corsaut). When they witness a meteor crashing over a nearby hill, they head off to investigate. At the crash site, an old man finds the meteor and foolishly decides to poke it with a stick. At which point a gelatinous blob emerges from the meteor and attaches itself to the old man, and all gooey hell breaks loose.

Very soon the blob begins to absorb and consume the old man. As it grows bigger and stronger, the blob creeps across town, devouring everyone and everything in its path. Only the kids know what is really happening, but getting the adults to believe them, is more difficult than tackling the blob itself.

The film is open to multiple interpretations and metaphorical ideas, such as the blob representing the slow creep of communism, the fear of the unknown, the fear of otherness, or the terrifying dread of the atomic age. Whether intended or not, this lends the film a certain intelligence and poignancy that is perhaps one of the reasons it has endured for so long. It’s certainly not the special effects, which looked crummy even at the time. The film isn’t scary either, and the big red blob itself is in no way in the same league as other movie monsters of the 1950s.

But The Blob has endured. And to such an extent that certain reviewers were convinced they’d seen the film when they hadn’t. Alongside the engrossing metaphors, perhaps what makes the film so charming is the camp appeal of something so daft being played so straight by all the actors. Or maybe it’s the novelty of 60s superstar and King of Cool Steve McQueen – who famously hated the film – being the leading man. You could also point to the production value; it looks far better than most other sci-fi B-movies of the era. These other films that were made within the Hollywood system weren’t getting shot on location and in widescreen Technicolor. The Blob was something of an outsider in that respect.

Whatever it is about The Blob, it does hit that cult film sweet spot, and Criterion absolutely love it, as they have released it in every format over the years (Laserdisc, DVD, and Blu-ray) and with bundles of extras each time. This release comes with two feature length commentaries recorded in 2000. The first is with producer Jack Harris and film historian Bruce Eder. The second is with the director Irvin S. Yeaworth Jr. and actor Robert Fields.

There’s also a fantastic gallery of photos, stills, and other Blob artefacts from the collection of Wes Shank, the noted film memorabilia collector known affectionately as “the caretaker of The Blob”. This rare treasure trove of Blobabilia (as it is known) comes accompanied with terrific little details and trivia about the film. The disc also comes with the original trailer. The booklet contains an essay by film critic and horror expert Kim Newman.

Advertisement. Scroll to continue reading.
In this article:Steve McQueen, The Blob, The Criterion Collection