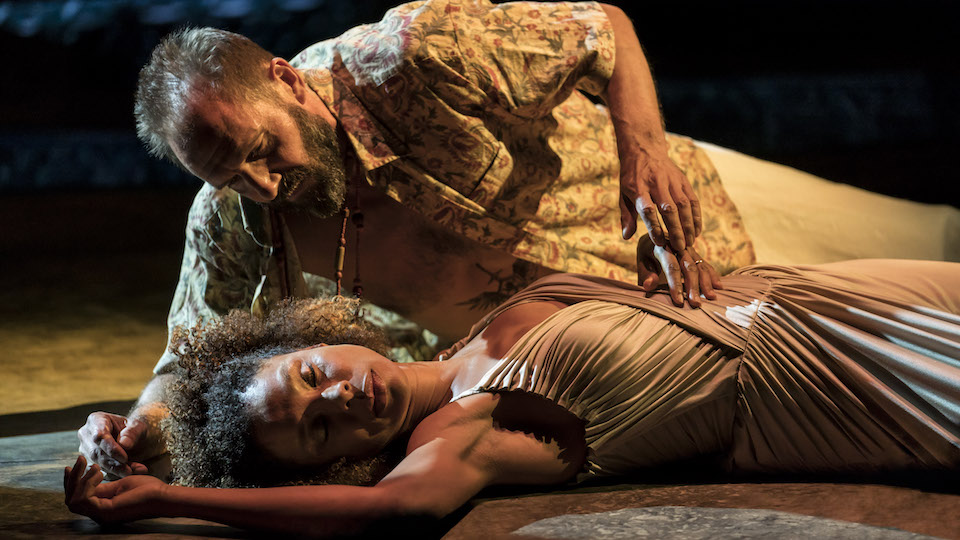 My A Level English teacher once declared that, no matter what we wrote, our opinions could add nothing new to the scholarly analysis of Shakespeare’s works. And what more, indeed, can I possibly add to the praise already heaped upon The National’s sensual revival of doomed lovers Antony and Cleopatra? Leading players Ralph Fiennes and Sophie Okonedo have both been awarded best acting accolades. Every inch deserved. Fiennes and Okonedo give their all to visceral, passionate performances that explore our historic couples’ power, lust and fatal personality flaws. The famous pair’s love story plays with laugh-out-loud humour, spine-tingling suspense and, of course, deeply moving tragedy.

Caesar and his assassins are dead. General Mark Antony now rules alongside his fellow defenders of Rome. But at the fringes of a war-torn empire the Egyptian Queen Cleopatra and Mark Antony have fallen fiercely in love. In a tragic fight between devotion and duty, obsession becomes a catalyst for war.

Director Simon Godwin (Twelfth Night) navigates a superlative supporting cast through a faultless production. When Antony and Cleopatra share the stage the atmosphere is electric, and one can’t take their eyes off them. But with Antony gearing up for the impressively brutal, bloody battle scenes, the games Cleopatra plays between her politics and the object of her affections escalate with disastrous consequences.

Hildegard Bechtler’s cool, clean and modern set design has to be seen to be believed. Quite simply breathtaking. (Models are on display in free exhibition Playing with Scale located in The National’s Wolfson Gallery until March 23rd 2019.) A rotating stage carries us smoothly between Egypt, Rome, Athens and the battlegrounds and expanses of water that lie between them. A particular visual highlight comes when Cleopatra’s heart breaks learning that Antony has married Octavia, and, after taking out her frustrations on the poor messenger – physically abusing him to much delight from the audience – she plunges down along with the stage, as if in a whirlpool, disappearing from view into the depths of despair.

In turn, costume designer Evie Gurney must have had a field day sourcing modern army uniforms and, of course, the opulent outline of Cleopatra. Frequent outfit changes see Okonedo ever more draped in simmering gold fabrics, aiding the sexy yet regal confidence befitting of a Queen.

As all is lost, we will the love story not to be over but, typical of Shakespeare’s tragedies, Cleopatra plays the old “pretend you’ve killed yourself” trick only for a desolate Antony to fall on his own sword. As a bloodied Antony is hoisted up by a golden cloth to his lover’s side, Fiennes and Okonedo seem to take it in turns to top each other’s performances. Entering his death throes, they share a final bittersweet kiss. Bereft, Cleopatra commits suicide, welcoming the bite of an asp (Egyptian cobra). Warning: a real snake is used on stage, which could put some with phobias off attendance. If you don’t already have tickets and you fancy watching through the safety of your local cinema screen, then you’re in luck! Cinemas across the UK will screen a live performance on Thursday 6th December. (To book tickets visit: National Theatre Live.)

My only complaint? The lack of a rousing standing ovation from the crowd at The National. Sure, it’s a long three hours but the cast have more than earned your attention. Get on your feet and applaud every aspect of this production! It’s a must see.