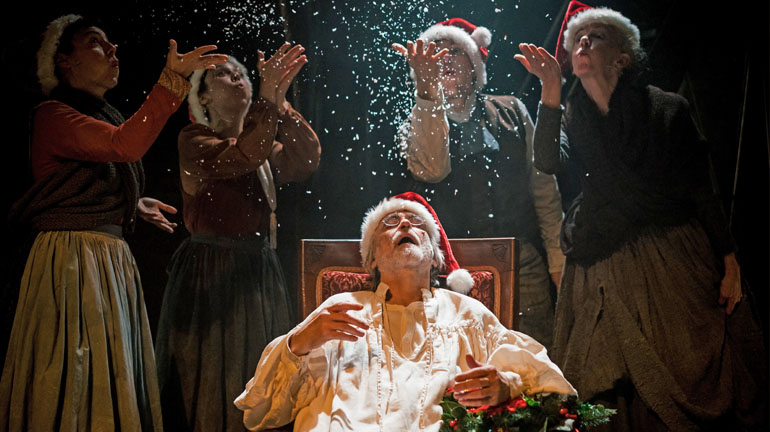 The festive season begins at Leeds Playhouse with a new adaptation of Charles Dickens’ classic, A Christmas Carol — promising to deliver chills, thrills and a few quills…

We take flight with Ebenezer Scrooge and the ghosts of Christmas past, present and future, to explore the origin of a man’s misery and witness his radical transformation on Christmas day. Set against songs, comedy and a few old-fashioned scares, this production honours a much-loved classic with some welcome innovations.

Set in Leeds and encapsulating all the novel’s Victorian iconography, Deborah McAndrew’s adaptation telescopes the story into a lean and evenly-paced two hours. The show is authentic to the tale we all know, whilst its relocation to a northern setting provides a refreshing, alternative slant to the period dialogue.

The cast of A Christmas Carol including Seb Smallwood as Tiny Tim. Credit: Andrew Billington.

The nine-strong Playhouse Ensemble has been collaborating closely for some time now and their creative cohesion shines through brightly in their latest work. The cast feels twice its actual size, and between them, a whole Victorian landscape is populated — from dance parties to busy streets and even a haunting muse of spectres.

Amy Leach’s direction is playfully ambitious, roving between space and place through imaginative transitions and intricate, abstract movements. John Biddle’s friendly musical score and Lucy Cullingford’s choreography grants a music hall quality to the play, feeling perfectly in-step with the period. This also marks the first real chance for the ensemble to exercise their vocal muscles and the uplifting, traditional tunes fully demonstrates their range.

You could say Dickens’ novel is a thrilling ghost story which just happens to take place at Christmas, and this theatrical version doesn’t shy away from its ghoulish focus. Joe Alessi plays a range of characters but is genuinely scene-stealing as the chain-clanking ghost of Jacob Marley — shockingly revealed in true 1930s monster movie style. It’s a chilling scene which sets out to scare and, like Tessa Parr’s ethereal Ghost of Christmas Past, presents an eerie and memorable image on stage.

Robert Pickavance turns over a superb central performance as Scrooge; beginning like something of an old man Steptoe before renewing himself into an effusive and almost prancing Mick Jagger figure. It’s a very funny creation and at times poignant and tragic, which is the whole point — we laugh at Scrooge but soon pity him for his unfortunate life choices. They say the art of acting is reacting, and Pickavance’s constant presence as a passive observer makes for a fascinating study of an elderly man enlightened.

To counterbalance some necessary bleakness, there’s a welcome deviation into pantomime with Elexi Walker’s fairy-like Ghost of Christmas Present. It’s a creative masterstroke which balances the dramatic tone of the show, reassuring younger audiences that the story does have a happy outcome.

The Playhouse’s pop-up theatre offers a wider scope than most stages, demanding an inventive approach to direction and design. Hayley Grindle’s expansive set presents lived-in details in its period brickwork, candles and grime, whilst her costumes offer a busy flurry of colour and texture. Amy Leach’s direction fully explores the entire breadth of this space to provide a Cinerama scale to these visuals — asking its audience to actively track the action from left to right. Combined with atmospheric lighting and immersive sound design, the final product is comparable to the visual qualities of a movie.

A Christmas Carol is a faithful yet fresh reinvention of a much-loved classic. The Playhouse has made their region proud with a daring and dynamic theatrical experience, which is the perfect complement to the froth and fun of seasonal panto. The show is expertly adapted, beautifully staged, smartly directed and sings to its audience in a local voice.

Your Christmas starts at Leeds Playhouse. Go see — and be prepared to be scared.