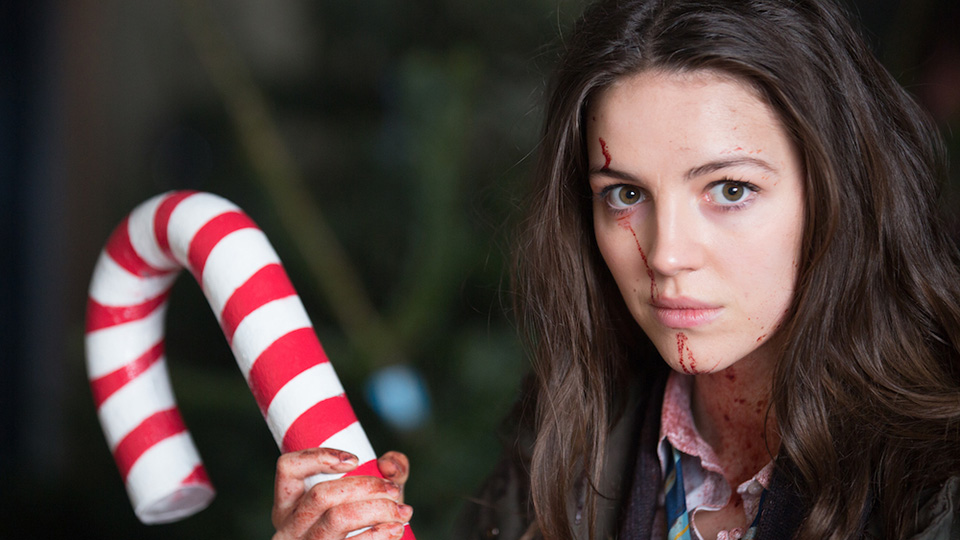 If someone had told me that I’d be writing a rave review about a zombie apocalypse musical set at Christmas before I attended Arrow Video FrightFest this year, I might have asked if they were having a laugh. On paper Anna and the Apocalypse sounds so bat shit crazy that it’s hard to believe it could actually work but work it does, impressively. Before the zombie apocalypse breaks out, the central characters are introduced and their relationships explained (in musical form of course) so you have a good understanding of who’s who.

As the night of the Christmas concert comes Anna and John are working at the local bowling alley while their friend Lisa (Marli Siu) is singing a completely inappropriate song, angering power hungry headmaster Savage (Paul Kaye) in the process. The next morning Anna and John sing and dance their way out of their houses before meeting in a graveyard, completely oblivious to the chaos and destruction unfolding behind them. It’s the first of many hilarious sequences in the film and one of the many memorable musical numbers.

Anna goes into denial about the existence of zombies, despite decapitating a zombie snowman, but eventually gives in she and John find classmates Steph (Sarah Swire) and Chris (Christopher Leveaux) taking shelter from the mayhem. With the help of on/off boyfriend Nick (Ben Wiggins) and his band of bad boys, the group starts to battle their way to the school and it’s a complete hoot to watch unfold.

The entire cast is brilliant. Ella Hunt is strong and fierce as leading lady Anna while Malcolm Cumming is very sweet and funny as Anna’s best-friend John who is madly in love with her. Marli Siu and Sarah Swire are scene stealers as Lisa and Steph respectively, while Ben Wiggins possesses impressive pipes as bad boy Nick. Christopher Leveaux offers plenty of comedic moments too as tech obsessed Chris who doesn’t want to let a zombie apocalypse stand in the way of him and his smart phone. Paul Kaye gives a wonderfully wacky performance as Headmaster Savage and he’s matched well by Mark Benton as Anna’s dad Tony who works as the school janitor.

What surprised me with Anna and the Apocalypse, aside from how brilliant it is, is the amount of emotion it has in the storyline. You really have no idea who is going to make it out of the film alive and it’s established quickly that no character is safe. That makes the gut punch of some of the deaths all the more shocking and dare I say I was a little misty eyed on more than one occasion.

I’ve never seen anything like Anna and the Apocalypse before and I doubt I will again. The film is incredibly fresh with strong direction from John McPhail and a screenplay by Alan McDonald and the late Ryan McHenry. In a time when cinema is constantly recycling old ideas, it’s a pleasure to find something that is truly original. It’s also going to serve as both a Halloween and Christmas favourite for years to come. Anna and the Apocalypse is a truly unexpected and very funny delight.