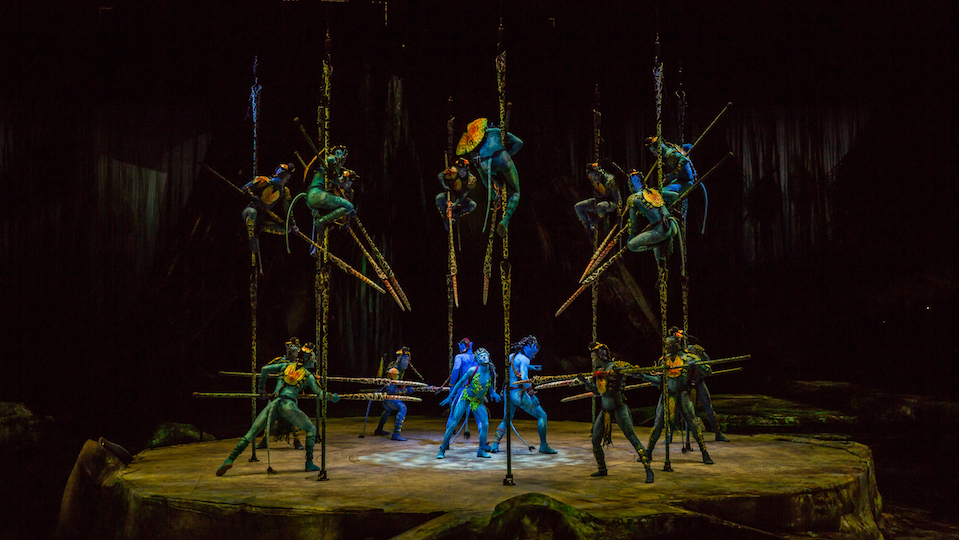 James Cameron and experts from the movie’s production have been consulted in the creation of Toruk – The First Flight. Billed as an official prequel to Avatar, set thousands of years before the film, the Cirque du Soleil performers will use breathtaking acrobatics to bring to life the Na’vi. Through a fusion of cutting-edge visuals, puppetry and stagecraft buoyed by a soaring cinematic score, Cirque du Soleil will apply its unique signature style to James Cameron’s imaginary world. From the Floating Mountains and the Omatikaya Hometree, to the Anurai’s animal sanctuary and the lush jungles where the Tawkami live, video projections immerse the audience in the breathtaking world of Pandora.

When a natural catastrophe threatens to destroy the sacred Tree of Souls, Ralu and Entu, two Omatikaya boys on the brink of adulthood, fearlessly decide to take matters into their own hands. Upon learning that Toruk can help them save the Tree of Souls, they set out, together with their newfound friend Tsyal, on a quest high up in the Floating Mountains to find the mighty red and orange predator that rules the Pandoran sky. Prophecy is fulfilled when a pure soul rises among the clans to ride Toruk for the first time and save the Na’vi from a terrible fate.

James Cameron said, ‘Avatar is really meant to be a celebration of human motion and human emotion and Cirque is able to capture that absolutely perfectly, because it’s all about human performance and physicality.  It makes you feel alive to watch these performers.’

TORUK – The First Flight is Cirque du Soleil’s 37th production since 1984. The company has entertained more than 190 million spectators in more than 450 cities and 60 countries on six continents.

Tickets go on public sale this Friday 16 November at 9am, follow this link for more information: www.cirquedusoleil.com/toruk.