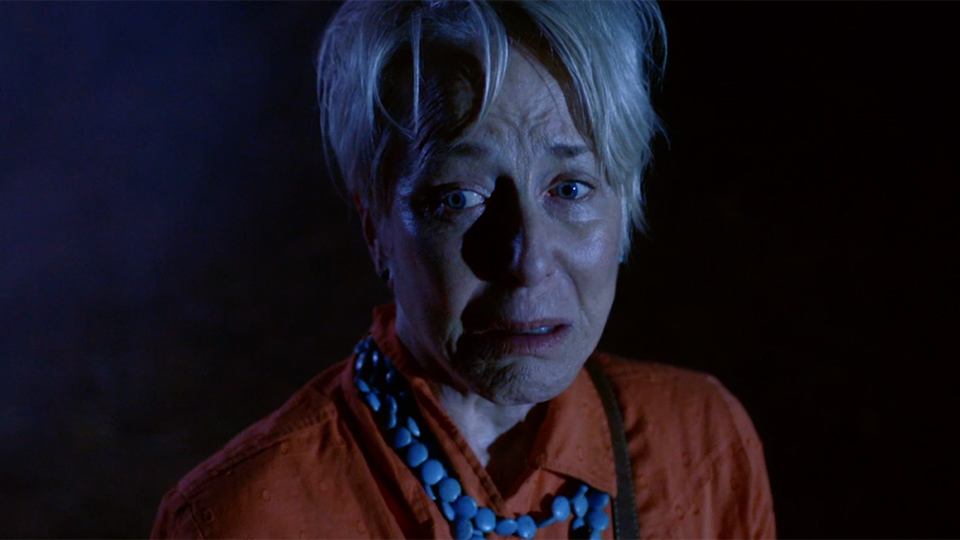 Karen Grassle is best-known for playing Caroline Ingalls in the long-running and much-loved series Little House on the Prairie.

Outside of that role she’s starred in classic series such as The Love Boat and Murder She Wrote. For her latest project, Grassle has stepped completely out of her comfort zone and made her first foray into horror with Lasso, one of our favourite films from Arrow Video FrightFest 2018.

Ahead of its arrival on-demand and following my chat with her co-star Andrew Jacobs, I caught up with Karen to talk about making a horror film, to discuss the challenges of the shoot, and find out how she got involved.

Hi Karen. How are you today and where are you speaking to us from?

Hi yourself. I’m at home in the San Francisco Bay Area.

Lasso is being released on DVD and Digital this month. Set the scene for us and tell us a little bit about what the film is all about…

A small group of seniors are being taken for a fun Active Day Out with two young, attractive counsellors. Their field trip is to a rodeo, which is run and operated by insanely murderous cowboys.

This film is quite different from anything you’ve done before. Why did you want to be part of this horror movie?

I love to work. This was a challenge I’d not met before. My son encouraged me to take the job saying “It’ll be fun Mom: you’ll run screaming through the night.”

Your character Lillian is one of my favourites in the film. She’s a strong character and very feisty. Tell us what drew you to her.

Exactly that. I liked Lillian’s ego. And I saw how I could embellish her with the help of the costumer who went with my ideas for her. A privileged lady who takes good care of herself. It was fun to plot her orange fingernails, her special Western look, and imagine the youth she spent with horses with her father.

Lillian is thrown into the middle of the action in Lasso. What would you say were the biggest challenges during the shoot?

Egad. Shooting all night in the dark in the dirt at the rodeo grounds. It was cold. We were far from the makeup room and the trailers. We actors were all stumbling around with our cell phone flash lights to get to the bathrooms.

You spend a fair amount of time working with Lindsey Morgan and Andrew Jacobs in the film. What were they like to work with?

Lindsey and I became a team in the film and also in the off camera time. She was a hard worker and very committed in those really terrifying fights earning my respect.

Andrew was fun to get to know. I especially loved it when he got to ride a horse for the first time in his life. Very sweet.

Lasso has been getting great reviews and your performance in particular has been mentioned a lot. Have you been surprised by the reaction you’re received?

Actually, I haven’t received whatever you’ve heard. Do clue me in. I’m very pleased if people have appreciated Lillian.

What’s the best bit of advice you’ve been given during your career?

As Lasso is a horror movie, we’d like to know what your favourite horror movie is and why?

For me, Psycho is the greatest.

Do you have any other projects in the pipeline at the moment?

I recently completed my memoir and am seeking a publisher right now.

Lasso is released on-demand on 13th November 2018. Take a look at the trailer below:

In this article:Karen Grassle, Lasso