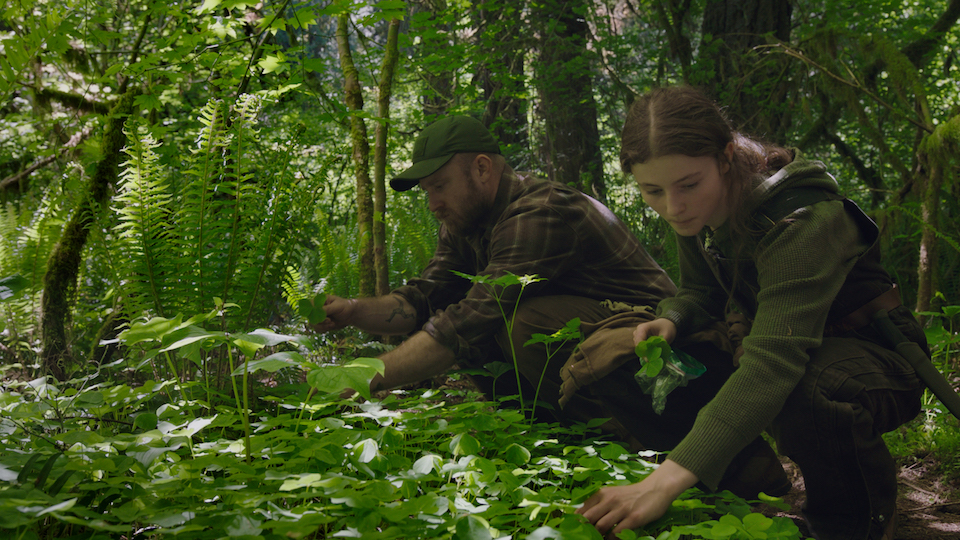 Having ventured into documentaries with Stray Dog, a film exploring the life of a disenfranchised army veteran, Debra Granik returns to fiction filmmaking with Leave No Trace. Exploring some of the same thematic concerns from her documentary, Granik’s tale of a father and daughter living off the land in rural Oregon is a powerful and deeply emotional experience. Following Down to the Bone and 2010’s highly lauded Winter’s Bone, it would be hard to argue with Granik’s status as one of American cinema’s finest chroniclers of those who live on the fringes of society.

Leave No Trace sees Ben Foster playing Will, a widowed army veteran. He is living completely off the grid with his teenage daughter Tom (Thomas Harcourt McKenzie). The early scenes of them in this lush green landscape have a sort of idyllic feel. They live off the land, foraging for as much as possible, picking mushrooms, drinking rain-water, whittling their own kindling for fire. They occasionally still need to venture into town for supplies and the odd creature comfort. Will pays for this by selling his PTSD meds.

But their peaceful solitude is shattered when they are spotted and reported to the authorities. They are taken into custody, tested and processed. They become part of the system they have eluded for so long. Social Services want to reintegrate them into society, and so they are housed on a farm, where Will can work, Tom can go to school, and they can live together in a proper home.

The film gently probes that Will needs the seclusion more than Tom, and she could happily transition into a normal life, with friends, pets, and a warm bed. This puts father and daughter at odds, and their conflict plays out in a way that is nuanced and beautifully restrained.

The film has very little dialogue, and both Foster and Harcourt McKenzie express themselves so clearly through gesture and a shared understanding of each other. Whatever happened before, which led them into the woods is never explained, and it doesn’t need to be. We can glean everything we need to know from their incredibly compassionate performances.

Granik, as always portrays her subjects with a profoundly human touch. There’s no judgement of the characters or the situations they find themselves in. This is just another way to live, in a country where so many are displaced. Photographed by Granik’s regular collaborator Michael McDonough, the film has an earthy and verité feel. Everything about the film feels real and true. There’s no sense of contrivance or narrative trickery. You completely forget the actors, and feel like you are watching real people. I could easily believe that Granik discovered these people and made them the subject of her next documentary.

When we reach that time of year when awards start being handed out, I would love to see both Foster and Harcourt McKenzie be part of the conversation. Granik’s previous film, Winter’s Bone made it all the way to the Oscars, but I suspect that was on the coattails of everyone losing their mind over Jennifer Lawrence. I don’t get the sense of Leave No Trace having the same level of hype and momentum. Which is a shame because the film, and the performances are just as good, if not better. When Tom tells her Dad that “the same thing that is wrong with you isn’t wrong with me” your heart will break into a million pieces.