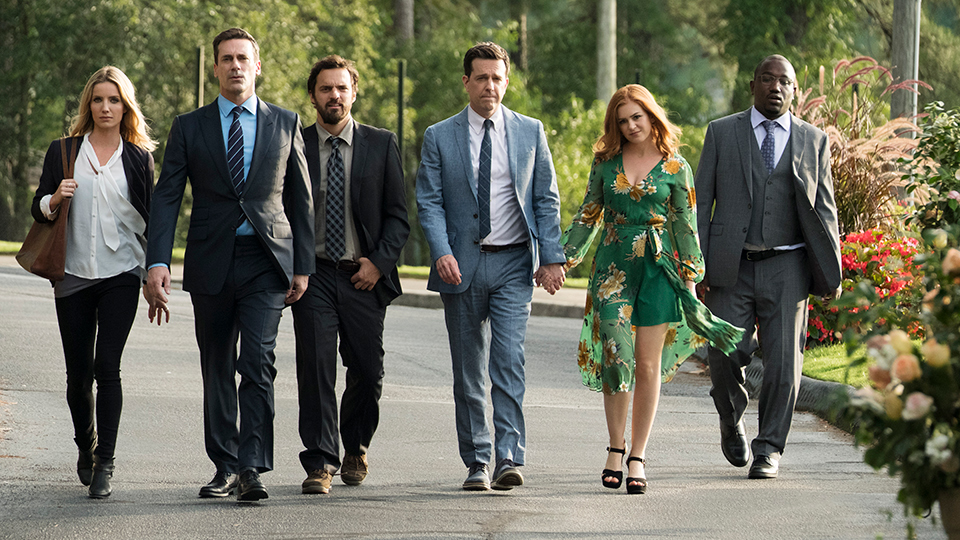 Hoagie Malloy (Ed Helms) assembles his group of friends – Bob Callahan (Jon Hamm), Chilli (Jake Johnson) and Sable (Hannibal Buress) – to continue their decades-spanning game of Tag with the aim of finally tagging Jerry (Jeremy Renner), the one member of the group that has never been tagged. Following Jerry’s decision to retire from the life-long game, the group works together to plot a way to trap and tag him. Tracking him down in the days leading up to his wedding, the group soon realises that their mission is not going to be an easy one as Jerry is prepared for their arrival and not going down without a fight.

On paper Tag sounds absolutely ridiculous. I remember first hearing about the movie and rolling my eyes thinking, ‘great, another crappy US buddy comedy’. My opinion started to change once I saw the stellar cast assembled for the film and then when I found out that it was inspired by a real group of men who have been playing tag for nearly 30 years, I actually became pretty intrigued. While the film is about a group of grown men playing tag, what wasn’t all that clear from the marketing is that the men came up with this idea, where they play tag for the month of May every year, to ensure they stay in touch and see one another. That’s a pretty sweet reason!

Tag wastes no time getting into the meat of the story, opening with Hoagie getting a job at Bob’s office, just so he can tag him. It’s a strong and very funny start, and I’m pleased to say the humour doesn’t really let up from there. Hoagie quickly assembles the rest of his group, including his overly-passionate/aggressive wife Anna (Isla Fisher) and journalist Rebecca (Annabelle Wallis), who was writing a puff piece on Bob until she caught wind of the tag game, and they head off in search of Jerry.

How much of the events you see on screen actually happened is a moot point, but it doesn’t really matter. During the credits there is footage of the real-life group playing Tag and you can see the film has drawn inspiration from those moments. Of course the movie plays up the various attempts to for the men to tag one another but it had to, to make an engaging and funny movie. It doesn’t lose the heart behind the true story though and that makes it surprisingly emotional at times.

You can tell that the actors involved had a great time making the movie. There’s an easy camaraderie that only comes from friends. Jon Hamm continues to play against type, letting his hair down as the successful but ultra-competitive Bob. Ed Helms is as reliable as ever as Hoagie, and he’s the heart of the story, while Jeremy Renner has a lot of fun as the almost ninja-like Jerry. Jake Johnson and Hannibal Buress bring plenty of laughs and complement the other actors. The scene-stealer though is Isla Fisher who plays her character Anna on the verge of crazy.

There’s only one extra on the DVD release and that’s Meet the Real Tag Brothers, a featurette that introduces you to the real-life group of men that the film was inspired by.

Tag isn’t ever going to be considered a classic must-see movie but it’s a hell of a lot better than you’ll expect it to be. There are plenty of laughs, including a fair few laugh-out-loud moments, and the sentiment behind the story is actually quite lovely. With a strong cast, Tag is a lot of fun and it’s a nice break from the heavily political and social films that are dominating cinema at the moment. Grab your popcorn and just go along for the ride!