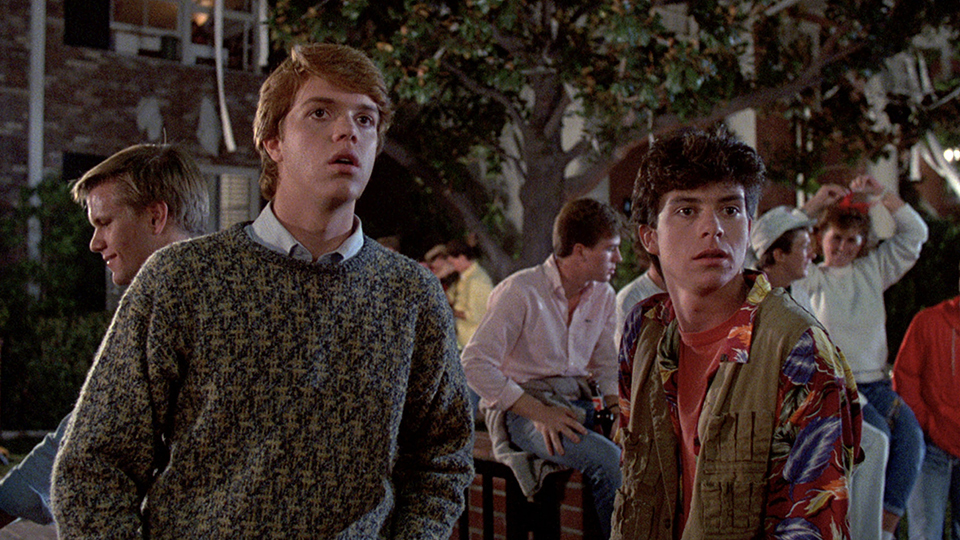 Outsider geeks Chris (Jason Lively) and J.C. (Steve Marshall) pledge allegiance to a fraternity at Corman University in a bid to get the attention of college beauty Cynthia Cronenberg (Jill Whitlow). For their initiation, the friends are tasked with stealing a dead body from the medical centre and leaving it on the steps of a rival house. Unbeknownst to them, the dead body isn’t really dead – it’s actually been frozen after being infected with an alien parasite. Before they get chance to steal It, the body thaws and comes back to life, unleashing havoc on the University campus.

Night of the Creeps is a cult horror film originally released in 1986. It was written and directed by Fred Dekker (The Monster Squad) and on its original release, it didn’t do very well at the box office. In the years that have passed, the film has found an audience and it’s become a B-movie cult classic. A mix between teen slasher and zombie movie, Night of the Creeps is an endlessly entertaining film that never takes itself all that seriously. It’s the kind of film you can switch your brain off to enjoy.

It’s pretty clear that Night of the Creeps was made by a horror fan. The surnames of all the main characters nods to famous horror directors and the deaths are both hilarious and gory. The opening scenes are shot in black-and-white, and they reveal the premise for the movie which starts in 1959. Two aliens try to prevent a third from releasing an experiment in a canister to earth but they fail. That canister is full of slug-like creatures, which attack a guy on a date causing him to go mad and kill his girlfriend.

From that point on Night of the Creeps is an absolute hoot. You have to put logic to one side and just enjoy the film for what it is. This was never supposed to be a serious horror movie that was looking for awards and acclaim. It’s meant to be a date-night movie that will have you jumping out of your seat, laughing your socks off and hiding behind your hands as the blood begins to pour. Add to that the presence of Halloween III: Season of the Witch’s Tom Atkins and you’ve got a winner.

The film’s main star Jason Lively, of the Lively acting dynasty, is superb as the hapless Chris Romero. The character is the typical 80s nerd-turned-hero and he plays it with gusto. He’s ably assisted by Steve Marshall as JC and Jill Whitlow as love interest Cynthia Cronenberg. Lively draws out plenty of humour from the script and story, and you can’t help but root for Chris all the way through the film.

The extras on the Dual Format release are impressive. Along with two audio commentaries, one featuring Dekker and the other featuring members of the cast, there is an hour-long featurette titled Thrill Me; Making Night of the Creeps taking you behind-the-scenes of the film giving you a real insight into the classic. The release also includes a featurette on the mighty Tom Atkins, a video interview with Dekker, deleted scenes, an alternative ending and a theatrical trailer.

Night of the Creeps is an under-appreciated classic. It’s a whole lot of fun and I’d actually love to see this newly polished up version on the big screen with a group of horror fans. It may not bother your Top 10 all-time favourite horror films list but it’s one that’s worthy of more attention than it received the first-time round. Funny, entertaining and very gory, Night of the Creeps is a film all horror fans should include in their collection.

In this article:Eureka Entertainment, Night of the Creeps