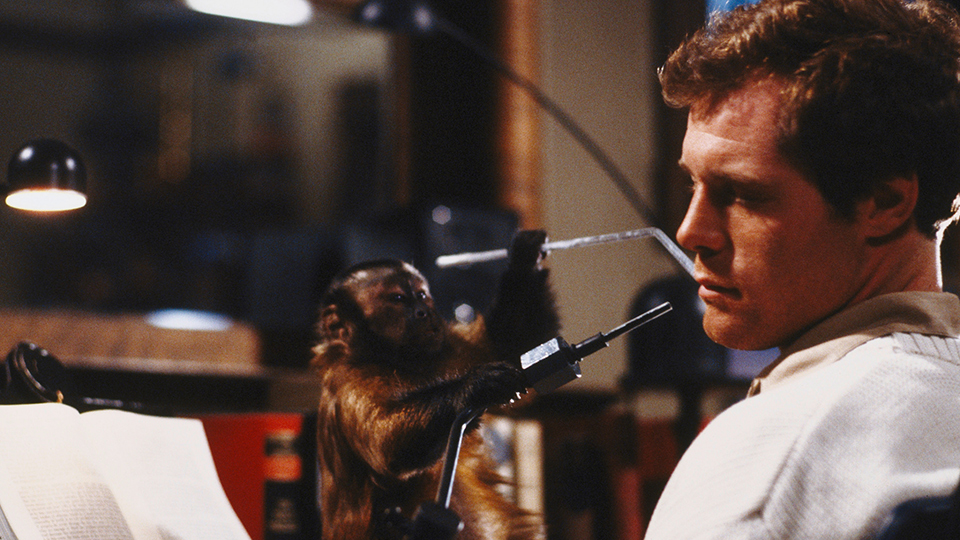 Athlete Allan Mann (Jason Beghe) has his life turned upside down when he’s hit by a truck while out running. When he wakes up he’s a quadriplegic and after returning home, he attempts to take his own life. In a desperate bid to help Allan adjust to his new normal, scientist friend Geoffrey Fisher (John Pankow) sets him up with one of the monkeys he’s been working with to assist him. At first Allan and the monkey, Ella, bond but soon he begins to suspect that she is acting on his rage for him and getting revenge on his behalf.

Over the years there have been a few monkeys turn evil style horror films but Monkey Shines was one of the first. Directed by horror maestro George A. Romero, the film is a taut thriller that’s surprisingly light on horror, opting for suspense instead. The subject matter is fairly dark and knowing that Ella is going to turn evil requires you to just go along for the ride in order to get the full enjoyment from the film. It’s true that it all gets a bit silly and stretches believability but isn’t that what all good horror does?

At the centre of everything is Jason Beghe, currently seen on the small screen in the hit series Chicago P.D. As Allan he’s mostly confined to a wheelchair and he has to convey his emotions using only his voice and his facial expressions. It’s a challenging role and Beghe acquits himself well. There are some moments where he moves more than a real quadriplegic could but you just have to put that to one side.

The film really starts to get going once Allan finds out there may be help out there in terms of getting him to walk again. At that point Ella becomes jealous and the insinuation is that she doesn’t want her master to have a normal life again. She also doesn’t want anyone to get close to him and her assistance turns into protecting him aggressively. No one around Allan is safe and part of the fun of the film is waiting to see who Ella chooses to pick off next.

Where the film falls down is that it’s simply far too long. At nearly two-hours, it’s over-stuffed and drawn out. Had it been trimmed down to 90-minutes, a lot of the lags could have been removed. When the film hits its stride, it’s a lot of fun but it takes too long to get there. Not even the appearance of a young Stanley Tucci, in a small supporting role, can hold your attention. The audience wants to see homicidal monkey action, not lengthy scenes with dialogue.

The Dual Format release is absolutely packed with fantastic extras. There are two commentaries, one with Travis Crawford and one with George A. Romero, a retrospective featurette An Experiment in Fear, an alternate ending, deleted scenes, vintage interviews and news reports, TV spots and trailers.

Monkey Shines is enjoyable but its run-time really does cause a few problems. The premise is fairly flimsy and it’s stretched far too thin here. Beghe gives a compelling central performance and some of the deaths are brilliant, but Monkey Shines should have focused more on the horror elements and less on the character-driven part of the story. It’s definitely worth watching but prepare to do a bit of clock-watching in the film’s lagging moments.