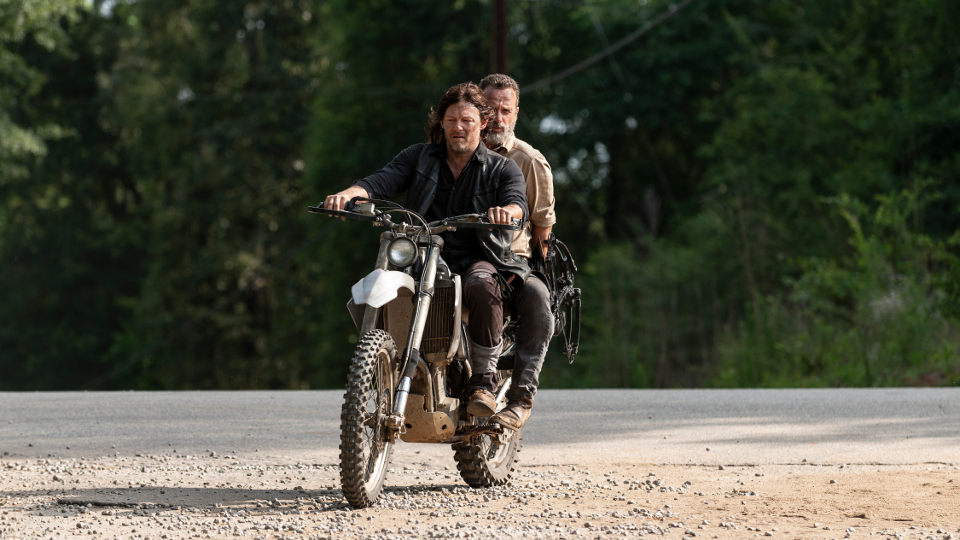 In the latest episode of The Walking Dead, Maggie (Lauren Cohan) got sick of doing things Rick’s (Andrew Lincoln) way and decided it was time for her to act.

At the start of the episode, we were treated to a montage of what Michonne (Danai Gurira) gets up to. By day she’s looking after and playing with Judith while keeping things running smoothly at Alexandria. By night she’s unable to sleep so passes the time going out and slaying walkers with her trusty samurai sword. During one night she got distracted by a hanging walker and another walker took her by surprise. She dropped her sword but took the walker out with a nearby baseball bat. It brought her memories of Negan (Jeffrey Dean Morgan).

Following Oceanside’s murderous spree against the Saviours, Maggie decided it was time to go and kill Negan. Jesus (Tom Payne) tried to stop her but her mind was made up. Instead he got a message to Rick in the hope he’d handle it. Rick received the message and tried to get one out to Alexandria to prevent Maggie gaining entry.

Daryl (Norman Reedus) realised something was going on and offered to drive Rick there quicker on his motorcycle. What Rick didn’t know was that Daryl was in on Maggie’s plan. When Daryl took a wrong turning, Rick demanded to get off. Daryl stopped and the pair began to fight. During the scuffle, they fell into a large pit and found themselves trapped.

Meanwhile, Michonne went to see Negan to try and get him to eat something due to him being on hunger strike. He said he wasn’t hungry and spoke of his wife who died of cancer. Negan also spoke to her about her dead son Andre and she explained he didn’t make it. Michonne left in a tantrum, throwing Negan’s food on the floor. She returned a little later to continue talking and realised Negan was trying to get her to get his baseball bat Lucille. She said they didn’t have it and that it was still out there somewhere. Negan was upset.

Rick tried talking to Daryl to explain why Negan should be kept alive. Daryl listened but argued back to why he should be killed. A fight broke out back at camp due to Jedd (Rhys Coiro) stealing a gun and trying to take over. Carol (Melissa McBride) got the better of him once again. The noise from the fight alerted two massive walker herds and drew them towards the bridge camp. Some ended up in the hole with Rick and Daryl and were quickly killed. The pair worked together and eventually scrambled out.

Elsewhere in the episode, Gabriel (Seth Gilliam) came round after being knocked out last episode by Anne (Pollyanna McIntosh). He found himself tied up, much in the same way Negan was when Anne captured him. She had a walker strapped to a metal frame and began to lower it to kill Gabriel. He quickly apologised for his behaviour and convinced her to let him live. Instead she knocked him out again. When he awoke he was alone and Anne had left a message to say she had left.

At the end of the episode, Daryl decided to head back while Rick jumped on an escaped horse to try and draw the walker herd away. His plan seemed to be going well until he accidentally led the herd into another one. Rick’s horse got spooked and threw him to the ground. Unfortunately for Rick he impaled himself on a rebar and fell unconscious. As he lay there in pain and bleeding the walkers closed in.

Can’t wait for the next episode? Read our preview of The Walking Dead – 9×05 What Comes After.