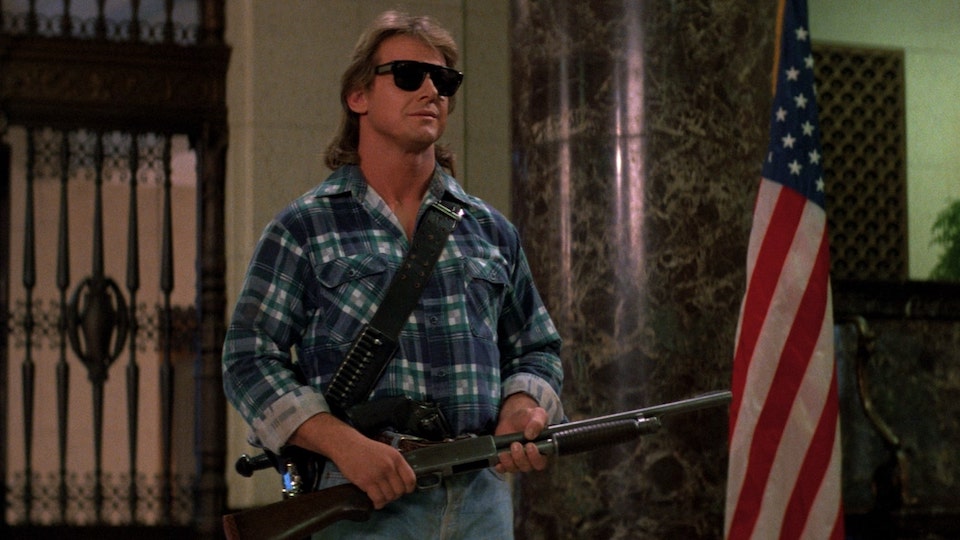 One of the most subversive films in the impressive back catalogue of horror master John Carpenter is coming to cinemas and blu-ray this Halloween, beautifully restored in stunning 4K. Bursting at the seams with fantastic special features, this new release is a must-own item for any discerning film fan. OBEY. CONSUME. WATCH TELEVISION. CONFORM.

They Live begins as a fairly serious examination of inequality in America. Carpenter’s films have always had political themes and social commentary running through them, but here he puts them front and centre. As out of work labourer John Nada (played by American wrestling star Roddy Piper) drifts into Los Angeles looking for employment, he observes the injustice of society, the rigged game the poor working classes are up against, and the post-Reagan desolation of the middle class.

Then it sidesteps effortlessly into a paranoid conspiracy thriller. Suspicion is everywhere. Carpenter asks if we can trust what the media and television are telling us. A street preacher rages that we are being corrupted and controlled. A rogue television signal keeps attempting to interrupt normal programming to warn us of the same thing. But no one pays any attention. We have a film here made thirty years ago that preaches the dangers of benign indifference in society. They Live is a prescient piece of work, and very much a film for today.

Then without skipping a beat, it switches gears into a balls-out crazy sci-fi action movie with ridiculous one-liners, and it is absolutely wonderful. Nada discovers the group interrupting the television signal working out of an old church. For some reason they are mass-producing sunglasses. When the police raid the church, Nada makes off with a box of the shades. In what is truly one of the most iconic sequences in John Carpenter’s esteemed career, Nada puts on the glasses and discovers a hidden reality – a monochrome netherworld of authoritarian control and conformity, and the ruling elite are hideous aliens.

Nada goes into full 80s action hero mode. After dispatching a few of them with his fists, he commandeers a pump action shotgun and bursts into a bank full of these ghoulish body-snatchers to declare “I have come here to chew bubblegum and kick ass, and I’m all out of bubblegum.” If you can’t enjoy a film with dialogue as good as that, then I’m afraid we can’t be friends. The film rattles along with its sly mix of carnage and political commentary, until a slight dip towards the end. Before we get there however, They Live delivers its masterpiece moment – Piper’s six-minute fist fight with Keith David, as he tries to force him to wear the glasses. It’s like the long-joke that was funny to begin with, then stops being funny, before eventually becoming funny again. It’s amazing, and looks even more glorious in 4K.

As already noted, this new release is packed with special features. First up is an audio commentary with John Carpenter and Roddy Piper. Then we have Subversion: Exposing John Carpenter’s They Live, a brand new extensive documentary looking at all aspects of the film. With contributions from film critics and historians, key crew members, and Carpenter himself, this is a fascinating and insightful examination of the film.

There is also a selection of featurettes from the original press kit. This includes The Making of They Live, which is the original behind the scenes short film from 1988 with on set footage and interviews with Carpenter and the main cast. This also includes short profiles of John Carpenter, Meg Foster, and Roddy Piper.

The Fake Commercials seen only in glimpses in the film are compiled and reconstructed. If you like your movie trailers with a certain vintage feel to them, you’ll enjoy the collection of They Live TV spots that are included on the disc. There’s also a photo gallery of production stills and behind the scenes shots.

There’s a ten-minute interview about the film with John Carpenter from 2012, which essentially covers off a lot we’ve already seen and heard in the previous special features. However this one is notable for Carpenter’s amazing reaction when asked if he ever thought about editing the film’s famous epic fight scene. This interview is from the 2012 blu-ray special edition, which also included interviews with Meg Foster and Keith David. Both of which are on this disc.

There’s also art cards, a copy of the soundtrack, a 48-page booklet, and a disc with the film in ultra high definition. This is a sensational special edition. For more information about the 4K restoration, and where you can find screenings around Halloween, visit www.johncarpenter4k.co.uk