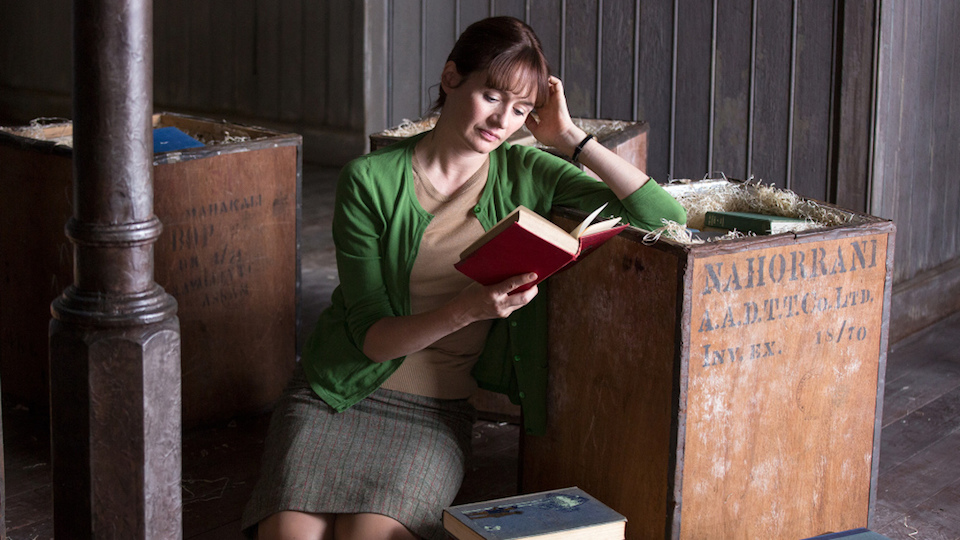 The latest film from acclaimed Spanish director Isabel Coixet is a very European take on a very English story. The colours, the framing, the unsentimental approach to the material are all decidedly un-English – and for the most part, the film is better for it. The Bookshop is based on Penelope Fitzgerald’s 1978 Booker Prize shortlisted novel of the same name. Set in a coastal East-Anglian town in 1959, the film tells the story of Florence Green (Emily Mortimer), a middle-aged widow who decides to open a bookshop in a dilapidated old building that has stood empty and unloved for years.

Her modest ambitions are met with smiling and polite resistance from the town’s upper classes, led by wealthy snob Mrs Gamart (Patricia Clarkson) who had other plans for the building. Bill Nighy plays Mr Brundish, a reclusive book-lover who forms a distant relationship with Florence, and then takes her side against Mrs Gamart. And that’s pretty much all there is to it. It vaguely recalls Lasse Hallström’s Chocolat (which was also set in 1959) in its depiction of provincial attitudes to all things new, but The Bookshop lacks the sensuality and desire of that film. This is a far more fusty and staid affair.

Watching this strange little film is an incredibly frustrating experience. It moves at a glacial pace, and very little happens. However there is a barbed political undercurrent giving the film an unexpected and timely edge in its depiction of conservative nostalgia versus Florence’s progressive stance – typified by her selling books such as Fahrenheit 451 and Lolita. This no doubt contributed to films massive success in Spain, where it was seen as an interpretation of their current political situation.

Emily Mortimer gives a steadfast and restrained performance as Florence. Her complete bemusement at the resistance she faces for simply wanting to open a bookshop mirrors our own. Bill Nighy is his usual captivating self. He and Mortimer have very little screen time together due to the nature of their relationship, but the scene they share on the beach is undoubtedly a highlight of the film.

Patricia Clarkson’s Mrs Gamert however is where the film comes slightly unstuck. She is delightfully wicked in the role, but what film is she supposed to be in? And where exactly is this film supposed to take place, where we have lords and aristocrats, and other society elites living in a working class fishing community? Is Coixet’s intention for this little town to represent a cross section of wider society, or does she think these places actually exist? It’s probably not important, but I found it a bit off kilter.

The Bookshop is also graced by an unseen and un-credited performance from Julie Christie who narrates the film from the present day. Her voice is a beautiful addition, but the dialogue she is given tells us nearly everything the film is already showing us.

For a film supposedly about books and reading and the love of words, set in a quaint English town, it lacks the whimsy to make any of this as pleasurable and enjoyable as it should be. Coixet’s intent instead seems to have been a more serious treatise on art and creativity. To show us how the act of being creative and going against grain will inevitably be met with resistance at every turn from the philistines of the world. How even the smallest, nicest, and most charming gesture – to bring knowledge, poetry, and escapism into peoples lives – is met with cynicism and nastiness. All admirable stuff, but unfortunately none of this really lands. By the time the credits roll you can’t help but think…was that it?