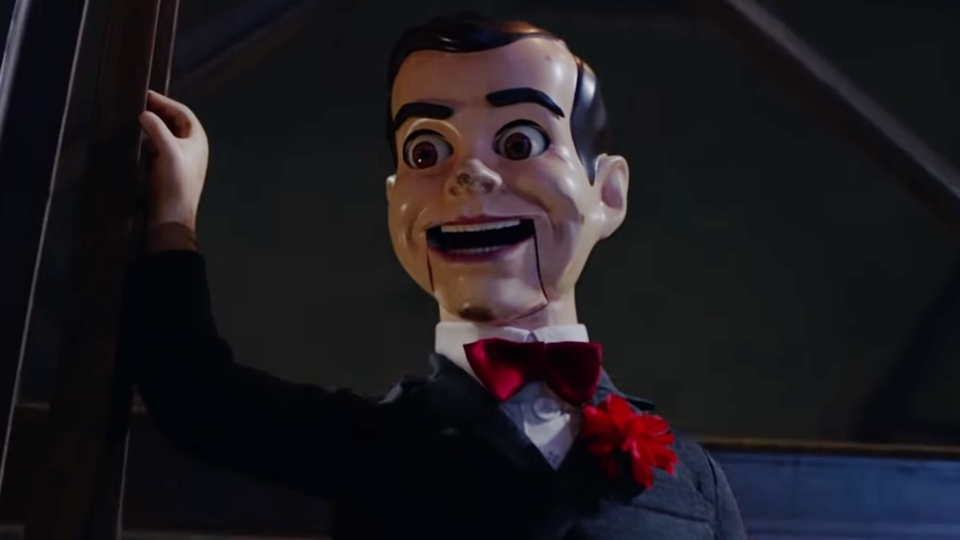 It’s that most wonderful time of the year – no not Christmas, Halloween! And what better way to see in the scary season than with a Goosebumps sequel. Goosebumps 2: Haunted Halloween is a family-friendly and spooky adventure that perfectly captures the essence of All Hallows Eve. A new set of characters keeps things ticking over nicely even if the plot may seem a bit familiar, but the return of Jack Black is always a welcome sight.

The premise is quite simple – Sonny (Jeremy Ray Taylor) and his friend Sam (Caleel Harris) have a get-rich quick scheme where they will clear out any old junk you might have. Told that they could keep whatever they wanted from the old abandoned house in the neighbourhood, they get to work and stumble upon a hidden room containing a chest. Once opened there’s an unfinished book in it from R.L. Stine called Haunted Halloween. Slappy (voiced by the Jack Black sounding Mick Wingert), the mischievous, possessed ventriloquist’s dummy then appears and the boys decide to take him home, not realising what they are about to unleash.

It all starts off well, with Slappy helping the boys do their homework and handle the local bully (Peyton Wich) but he is soon up to his old tricks again and before long sets a plan in motion to take over the town of Wardenclyffe, New York with a little help from some resurrected monsters and witches from Stine’s books. It’s left to Sonny, his sister Sarah (Madison Iseman) and Sam to put an end to Slappy’s masterplan before he makes it permanently Halloween.

It’s a medical fact that Wendi McLendon-Covey makes everything better. It’s great to see her in Goosebumps and the Bridesmaid actress clearly has fun playing up to the role of Sam and Sarah’s mum Kathy. The scene when she first discovers Slappy but thinks it’s just a prank is really funny, channelling the hilarious maternal vibe that she uses so well in TV’s The Goldbergs. Speaking of which, how has she not won an Emmy for her work on that show yet? She also has a good dynamic with another unsung sitcom hero in Chris Parnell. He plays Walter, the local store clerk, who has a crush on Kathy.

Elsewhere, up-and-coming superstar Madison Iseman is simply excellent as Sarah. She is already a familiar face after a strong performance in Jumanji: Welcome to the Jungle (she played Bethany, who incidentally transforms into Jack Black in that movie). Iseman is front and centre of everything that’s great with Goosebumps 2 and she is definitely going to be a name to look out for in the future. Sarah has an important role to play in this film; with Iseman channelling Elisabeth Shue in Adventures in Babysitting here as a strong female lead who has to save the day.

Jeremy Ray Taylor and Caleel Harris do well as Sonny and Sam and give the film a good central friendship to get behind. It’s never dull when Ken Jeong makes a cameo appearance, and he is very funny as Mr. Chu, the neighbour who is obsessed with decorating his house for Halloween. Then there’s Jack Black who is his usual hilarious, reliable and awesome self. R.L. Stine springs into action when he gets world that Slappy is back to his old tricks. Mick Wingert delivers a fantastic vocal performance as Slappy, full of devilish glee and that killer giggle that always raises a laugh.

Goosebumps really transports you to the idealised world of Halloween Americana, with beautiful houses, autumnal settings and gorgeous Halloween decorations on every street. It also has some great special effects in place. The classics are all there, with the Wolfman and the Abominable Snowman doing what they do best. The witches look fantastic, as do the flying pumpkins, the sheet-covered ghosts and the giant spider made of balloons. It’s all there to deliver a seasonal visual feast.

Goosebumps 2: Haunted Halloween may not reinvent the wheel but it does the basics right with boundless enthusiasm and energy. It has a wonderful ensemble; some cracking gags and is a hell of a lot of fun to watch. Kudos to director Ari Sandel (who made one of the best teen comedies of the past few decades in The Duff) and writers Rob Lieber and Darren Lemke for doing justice to R. L. Stine’s beloved collection of stories. And look out for a cameo from the great man himself towards the end of the film too, along with a brilliant Stephen King related gag!