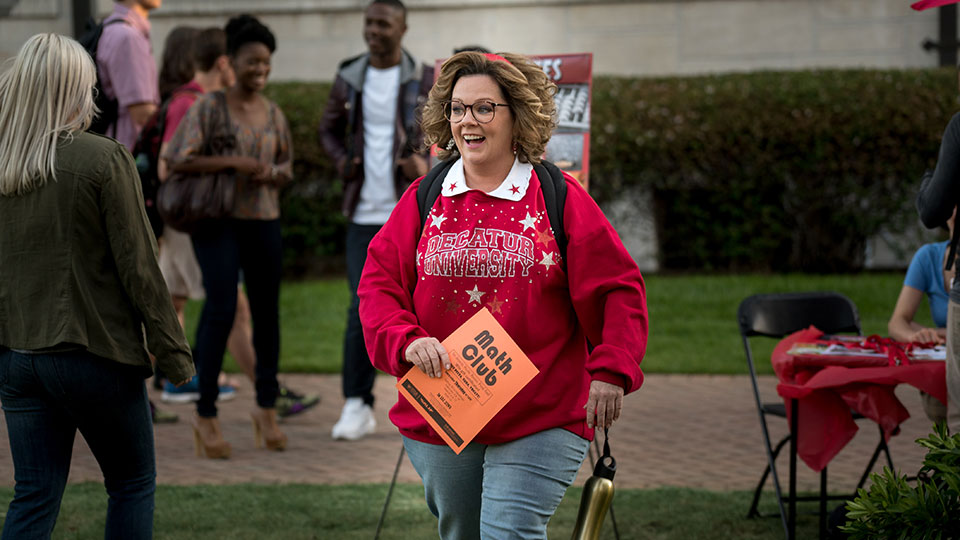 Deanna (Melissa McCarthy) and her husband Dan (Matt Walsh) drop their daughter Maddie (Molly Gordon) at college following an emotional goodbye. As they are leaving the college, Dan drops the bombshell that he wants a divorce and he’s having an affair with another woman. Heartbroken, Deanna decides to enrol in college to complete the course she never got the chance to finish and ends up landing a place in the same class as her daughter. Maddie isn’t all too pleased but Deanna finds an opportunity for a do-over to get her life back on track.

Life of the Party is the kind of fish-out-of-water comedy that Hollywood churns out several times a year. A collaboration between star Melissa McCarthy and her husband actor/director Ben Falcone, the film offers up a few laughs but the plot is very formulaic and not particularly original. Against all odds Deanna is quickly embraced at her daughter’s college, even by her daughter, and she gets swept up in reliving her youth and letting her hair down.

When she first arrives Deanna is the target of the mean girls led by Jennifer (Debby Ryan) but she finds an ally in fellow older student Helen (Gillian Jacobs). With the help of her daughter Maddie, Deanna gets a makeover and starts to embrace her more youthful appearance. As well as attending frat parties, Deanna embarks on a romance with college student Jack (Luke Benward) and knuckles down to get through her studies and overcome her fear of public speaking.

As always Melissa McCarthy is very watchable. She doesn’t need to stretch herself in Life of the Party and she can do this kind of role in her sleep. What’s most frustrating is that she co-wrote the screenplay with Falcone and I would have expected something a bit sharper and smarter. I feel like I’ve seen McCarthy play this role too many times before and she’s a much more capable comedic actress than this film allows. Luke Benward is great as Deanna’s wide-eyed young suitor and Gillian Jacobs brings a few laughs too as classmate Helen.

The DVD only features one short extra, ’80s Party, which takes a look at one of the film’s key scenes.

Life of the Party is enjoyable but it’s not adding anything particularly new. McCarthy has made so many of this type of movie now, it’s starting to feel a little bit stale. She’s a very gifted performer and way better than the material she has here. If you want to turn your brain off and enjoy a few laughs, then you’ll like Life of the Party but if you’re looking for a comedy with something fresh and original to say, I’d recommend you steer clear of this one.