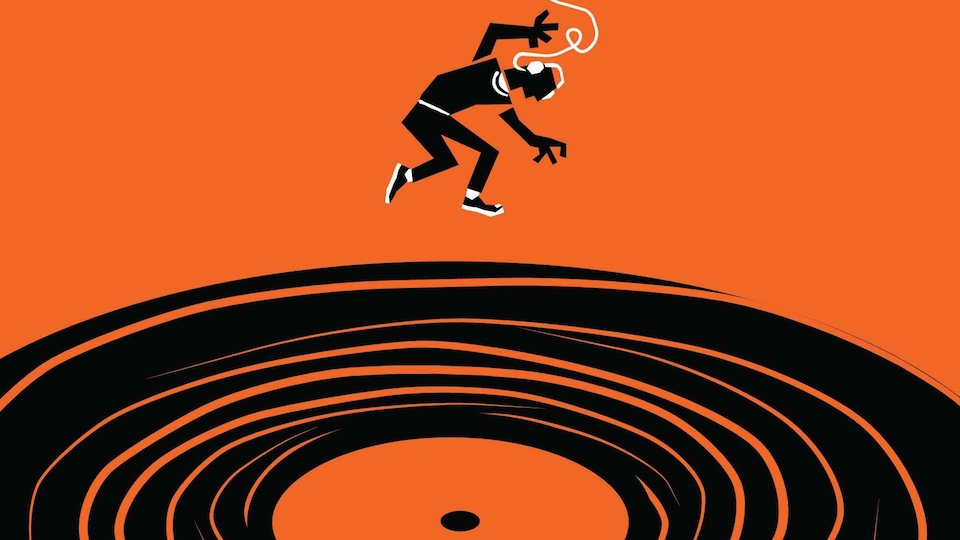 Music and comedy fans will delight in this new ‘part gig, part play’ written by Will Adamsdale (Perrier Award Winner for Jacksons Way), Ed Gaughan (Peter Sellers Comedy Award nominee for Skeletons) and Tom Parry (triple Edinburgh Comedy Award nominee and one third of sketch group Pappy’s). Adamsdale and Parry performed together at this year’s Edinburgh Festival Fringe with Beetlemania: Kafka for Kids (read our review here) and it appears their collaboration continues to blossom into entertaining flights of fanciful storytelling.

The Lost Disc, born from an original idea by William Adamsdale and Luke Ponte, is both a love letter to and merciless send up of the music industry. The action begins with narration from a dishevelled Stu Morcambe (John Lightbody, Ghost Stories), a music journalist hailing from Leeds. Sardonic Stu is here to explain his quest for the holy grail of music; The Lost Disc. We learn that the past decade has seen his obsession with uncovering this fabled record cost Stu his job at NME and caused his exasperated girlfriend to leave him. Still, blind to his manic behaviour, Stu shrugs off the doubters, convinced that he’s onto something big. If only he could prove that his hunch is correct.

Distinctive tunes from the ‘three forgotten genii’ intertwine with Stu’s tall stories detailing each legend’s career. First up, Will Adamsdale embodies the one time ‘King of Carnaby Street’ turned recluse Roger Lefevre, mingling elements of 60s stars such as Bob Dylan, Syd Barrett, Roger Daltrey and Robert Plant. Next, there’s 50s Sinatra-esque smooth crooner Tony Noël whose popularity died out with the arrival of four young lads from Liverpool. Lastly, Stu shares the story of country duo A.P Williams and sister Arlene (picture Kenny Rogers and Dolly Parton). Successful until A.P has a crisis of the soul and abandons a devastated Arlene who’s left to carve out a career without him when he disappears without a trace.

As the company pastiche popular 20th century music genres with gag-heavy dialogue and toe-tapping songs, a guaranteed grin of recognition will be fixed to your face. As Stu’s tenuous clues are pieced together, we’re left second guessing whether the disc exists anywhere other than inside Stu’s frantic mind. Ed Gaughan stands out as an audience favourite, a talented musician and character act with a flair for comical accents and off the cuff mickey-taking of fellow cast members. Alongside Victoria Elliott (Vic and Bob’s Big Night Out) and Will Adamsdale, they all move seamlessly between personas and quick costume changes while driving big laughs and the story along at a swift pace. There’s clever use of instruments doubling as props along the way and the stage, although cluttered with equipment, doesn’t feel claustrophobic. As the finale builds, our imaginations are invited to run as wild as we begin to recognise the logic in Stu’s esoteric musings and increasingly absurd links to the occult. Will Stu find the disc and save his sanity? Go along to hear him out in this carefully woven mix of music, comedy and intrigue.

Weekend performances are followed by an additional ‘After Party’ jam session of covers and original songs from the company between 11.30pm-12.30am.