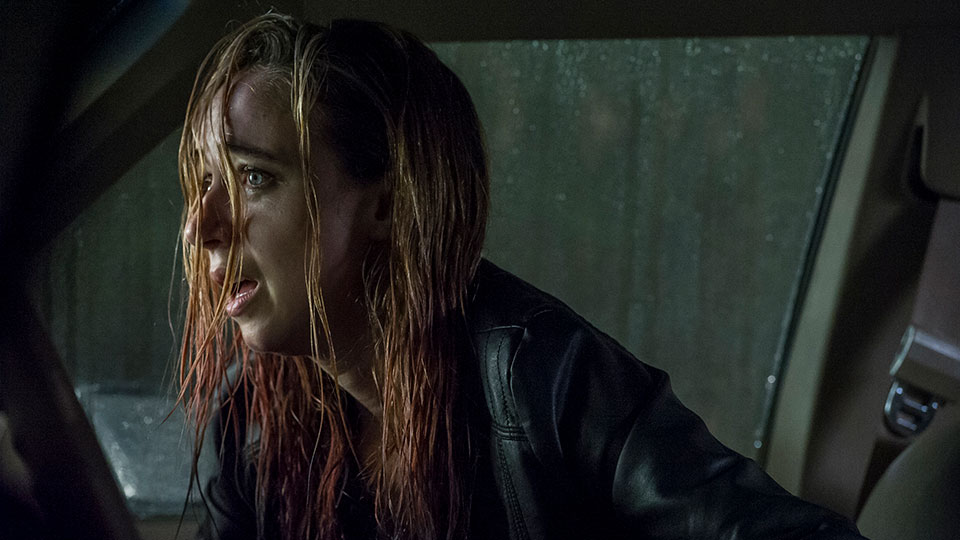 With their relationship strained and plagued with troubles for years, Kathy (Zoe Kazan) and her daughter Lizzy (Ella Ballentine) agree to part ways. Battling with addiction, Kathy decides to take Lizzy to live with her biological father, realising that it’s the best life for her daughter. As the two make their journey during the night, they hit a wolf in the road leaving them stranded in the darkness and heavy rain. Lizzy calls for help and a tow truck soon arrives but so does something else… a monster.

The Monster is the latest film from Bryan Bertino, the filmmaker behind horror hit The Strangers. This film shares nothing in common with that one though, framing itself as a contemporary creature feature that’s actually an exploration of how the bond between a mother and her daughter has irrevocably broken down. The key moments that put strain on their relationship are highlighted through a series of flashbacks that occur during the course of the film. Lizzy feels her mother is disinterested in her and never listens while Kathy is preoccupied with a toxic relationship and where she’ll get her next drink from.

Some of the flashbacks are actually pretty heartbreaking. One in particular shows Kathy screaming at Lizzy to get in the car so she can take her to a show she’s performing in. Lizzy screams back as her mother swears at her in the street before eventually telling her to get her own ride to the show and drives off without her. As the car hurries off, Lizzy screams ‘fuck you’ after her mother and it’s the moment you realise there’s probably no way back for these two characters.

With such a heavy and emotional story hanging over it, the introduction of the actual monster pales in comparison. It’s clearly an analogy for Kathy’s addiction that’s threatening to destroy her and Lizzy’s fears about her life thanks to have a useless mother. Both characters are forced to face up to the monster both psychologically and in reality. It’s a little heavy-handed at times but for the most part it’s an effective storytelling device.

Much of the film takes place in the confines of a car and writer/director Bertino captures the claustrophobic feel of the situation. Kathy and Lizzy are pushed together and forced to work with one another to try and get out of their situation. Zoe Kazan is brilliant as Kathy and she’s a pretty unlikable character. She seems to hold nothing but contempt for her own daughter and even when they’re in peril, she lacks the maternal instinct you’d expect the character to have. The star of the film though is Ella Ballentine who is excellent as Lizzy. She is fearless and she digs very deep to give an authentic and affecting performance.

While not strictly speaking a straightforward horror, although there are some jumpy moments, The Monster is an exploration of the horrors that many people face in their life. The titular monster (who looks a bit like Venom) is an effective plot device and Bertino doesn’t go to pains to explain its existence, which I liked. The film goes to a few places you probably won’t expect and it’s pretty tense. Definitely one to watch with the lights down low as the nights draw in.

Buy The Monster on DVD