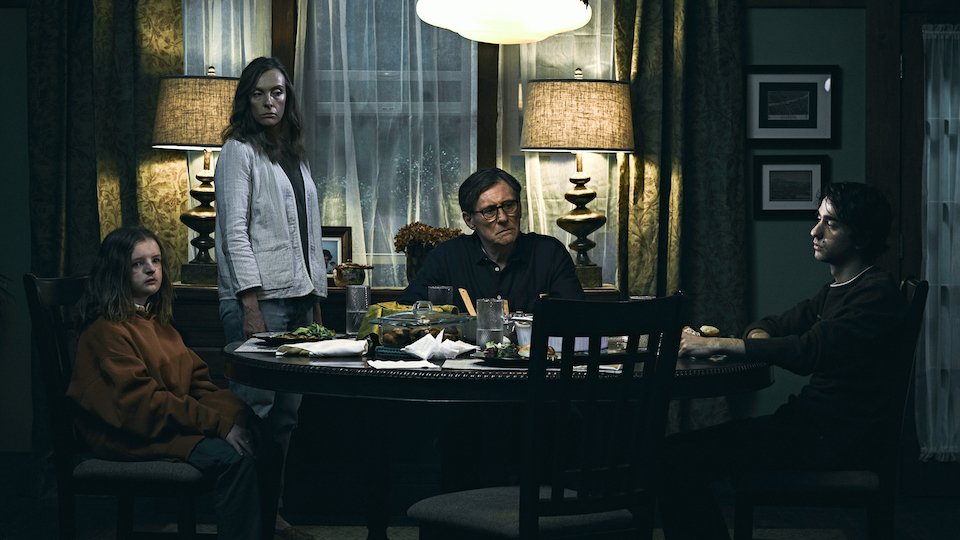 Horror is incredibly subjective. We each have our own personal nightmares lingering in the deep dark of our subconscious, waiting for some film, book, or TV show to tap into it and scare us half to death. With that in mind, I’m going to begin this review by sharing my personal experience of seeing Hereditary – the startling debut film from writer-director Ari Aster – for the first time. Now I’ve been watching horror films since I was far too young to watch horror films. It takes quite a lot to scare me these days, but like most people, I was somewhat freaked out by the incredibly creepy and effective trailer for this film. By the time I took my seat to watch Hereditary, I had heard from a few people on Twitter that it was actually nothing like the trailers, and this was leading to some audiences hating the film. My curiosity was piqued to say the least.

Then the film started and my curiosity was replaced by a constant state of visceral anxiety. I spent the next two hours and seven minutes in a claustrophobic, cold-sweat inducing hell-scape, as I flipped between being unnerved, unsettled, and scared out of my fricking mind. There are images in this film that have stayed with me, and haunted me for months. After seeing Hereditary that first time, I found sleep hard to come by for quite a few nights.

Hereditary tells the story of Annie (Toni Collette) whose mother has recently died. The film begins with her funeral, and it becomes immediately evident during the eulogy that the relationship between Annie and her very private mother with her “private rituals and private friends” was extremely complicated. The toxic influence of this matriarchal figure has had a huge impact on Annie, her husband Steve (Gabriel Byrne), her son Peter (Alex Wolff), but most of all on her young daughter Charlie (Milly Shapiro).

As they each try and cope with the loss and grieve in their own way, it becomes frighteningly clear that all is not well with this family. There’s Charlie’s strange and ghoulish behaviour, the suggestion that something awful has happened at the cemetery, and the overwhelming sensation that Annie’s mother might still be with them. Aster’s brilliant screenplay works equally well as a family drama as it does as a horror film. The spine of Hereditary is the fear of inheriting family trauma and passing it on to your kids. From this very conventional and relatable subject, Aster’s script unravels this family into a cursed nightmare.

Technically and stylistically, the film is almost flawless. Annie works as a miniaturist, which she obsessively pours herself into following the death of her mother. The house is filled with meticulous dioramas and models that she has previously created, and Aster and his cinematographer Pawel Pogorzelski make effective use of them, as the camera glides through the house and into these models. It lends the film a deeply disturbing sense of artifice, as we never quite know what is real and what is a model. This off-kilter interior geography of Hereditary is unbelievably unsettling, and comparisons with Kubrick and The Shining are not entirely unjustified.

Ari Aster is clearly a precision filmmaker. The design and look of the film is absolutely staggering. The use of negative space in the frame is inspired, and the mise-en-scène would make Hitchcock nod in appreciation. The scares are curated to perfection, slowly twisting the knife and building the sense of unease, until we find ourselves staring at the most unassuming image, and then wondering what that might be in the corner of the frame, before gasping in horror as gooseflesh explodes over your entire body. Hereditary is a technical masterclass in the art of horror.

But it isn’t just the technical proficiency of Aster and his crew that makes the film so impactful. Exploring grief and guilt, and the trauma of loss, Hereditary has at its heart a central performance from Toni Collette that is truly breath-taking. Reminiscent of Essie Davis in The Babadook and Narges Rashidi in Under the Shadow, Collette is fearless, throwing herself into the ever increasing mania of Annie, as she comes to realise the actions of her deceased mother in life – and possibly death – are tearing her family to pieces.

Evoking Rosemary’s Baby and The Exorcist, to name but two, Aster ramps up the terror in the second half of the film. The atmospheric dread he has so carefully built up, suddenly unleashes the true horror of Hereditary. To say it goes up to 11 would be an understatement. I’ve just watched it again for this review, and let me tell you, it is no less impactful even when you know what is coming.

Arriving on Blu-ray, the disc comes with just a couple of special features. Firstly there is a short 20-minute featurette – Cursed: The True Nature of Hereditary. Now I don’t think there’s anyone out there who watches the special features before the film, but if you are one of those people, please don’t do it here. This documentary featuring interviews with Ari Aster and all the main cast and crew is super spoilerific. The only other feature is a selection of 8 deleted scenes.

As I said at the top of this review, horror is entirely subjective. It either scares you or it doesn’t, and I completely understand that Hereditary won’t work for everyone. But it really worked for me. If you are open to its particular dark charms, this is a film that will grasp your spine with icy cold hands and never let go. For my money, it deserves to be mentioned in the same breath as the true heavyweights of the horror genre. It is truly one of the most terrifying films I have ever seen, and without a doubt one of the best films of 2018.