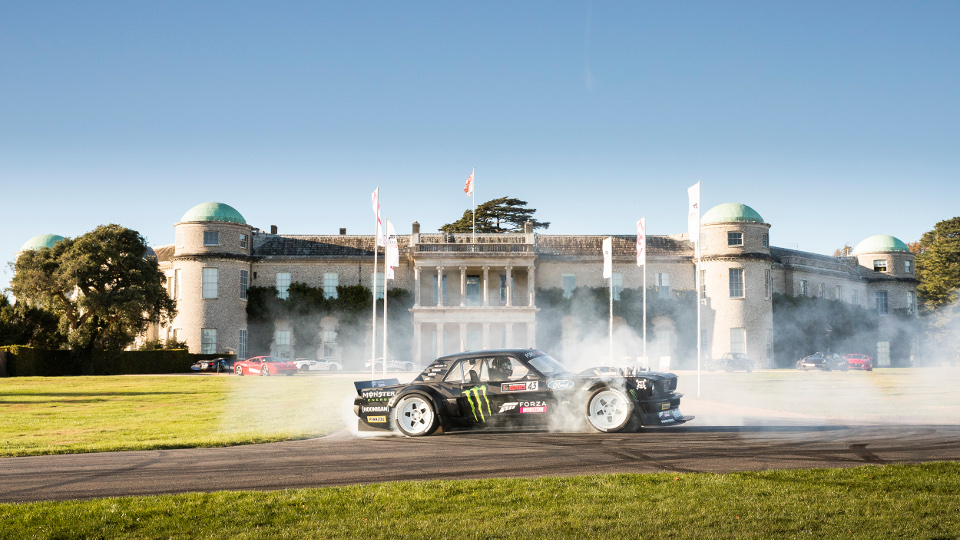 To celebrate yesterday’s Forza Horizon 4 launch, Xbox invited Hoonigan Racing Division’s Ken Block to unleash his 1,400 BHP 1965 Ford Mustang Hoonicorn V2 on the perfectly manicured grounds of the world-famous Goodwood Estate. Check out the video below to see him in action.

Block made the most of his opportunity by drifting through the Estate’s pristine entrance and donutting around three classic British minis and even a WWII Spitfire. Later tried to take Hafþór Björnsson (World’s Strongest Man and The Mountain in Game of Thrones) for a spin, but the 6-feet 9-inch man mountain just couldn’t fit in to the car!

Block and his Hoonicorn were just one part of a two-day Forza Horizon 4 launch festival at Goodwood, featuring a series of unique and thrilling experiences inspired by the game, including Country Lane Driving through the Goodwood Estate and a Four Seasons Rally through bespoke tracks themed after Forza Horizon 4.

His 1965 Ford Mustang Hoonicorn is also one of more than 450 cars included in Forza Horizon 4 that players can collect, modify and drive. With new Drift Suspension upgrades and the ability to customize your driver with clothing and emotes, it’s never been easier to express your style.

View some photos of Ken Block in action in our gallery:

In Forza Horizon 4, players can earn influence however they play. Race on the road, perform stunts, create liveries and designs, explore and drift around the open world, or watch and stream the game on Mixer. In the new open-ended campaign, everything progresses the game.

In the next few weeks new Leagues will be added for players to rise through with unique rewards and prestigious Grandmaster titles. Shortly after launch a new Route Creator feature will allow players to map out their own routes to drive or challenge friends and the world.

Tune-in the next Forza Monthly livestream at 9pm BST tonight (October 3rd) on Mixer, where the team at Turn 10 will be chatting all things Forza.

Advertisement. Scroll to continue reading.
In this article:Forza Horizon, Ken Block, Xbox One