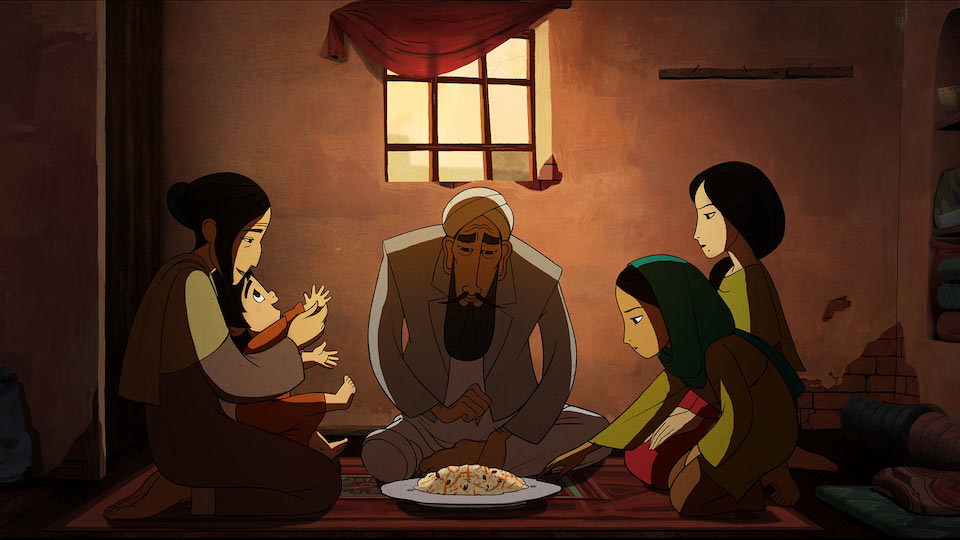 The Breadwinner is the latest feature film from Cartoon Saloon – the Irish animation studio responsible for the award winning The Secret of Kells and Song of the Sea. Adapted from the bestselling novel by Deborah Ellis, and directed by Nora Twomey, The Breadwinner tells the remarkable and magical tale of Parvana, a courageous and defiant 12-year-old girl living in Kabul, under the fearsome rule of the Taliban.

It is the sort of subject matter that could easily lend itself to a hard-hitting documentary, or a brutal live action drama. However, in adapting Ellis’s novel, Twomey has perfectly captured the child’s eye view of a country at war with itself, and done so with a beauty, humour, and a twinkle of magic that perhaps only animation could provide. Brilliantly combining impressionistic styles, fantastical sequences, and beautiful, expressive hand drawn characters, The Breadwinner is a visual feast.

The film begins with a remarkable history of Afghanistan, as Parvana’s father tells her the story of a country surrounded by warring empires, which has been endlessly invaded over centuries. From Alexander of Macedon to the mighty Soviet Union. It is the sort of bravura opening Pixar have become famous for, but instead of flawless 3D animation, Twomey depicts this history in beautiful two-dimensional cut-outs – a technique she will use throughout the film.

The film is set in 2001, in the weeks leading up to Operation Enduring Freedom – the US led invasion of Afghanistan following the September 11 attacks. Parvana (Saara Chaudry) and her father Nurullah have set up a rug on the street, where they are trying to sell a few possessions to make some money. He was a teacher once, but education is now a thing of the past. When he talks back to a young Talib, he is beaten and taken to prison.

Under Taliban rule women cannot leave the house on their own, leaving Parvana, her mother, sister, and baby brother unable to buy food. An attempt to visit the prison to plead Nurullah’s case ends with her mother being brutally beaten in the street. With no other option, Parvana cuts off her hair and starts wearing the clothes of her deceased older brother. Pretending to be a boy gives her the freedom of Kabul, and allows her to explore the city, find work, and provide for her family. Meanwhile, as the war looms ever closer, Parvana narrates a story within the story, a fantastical tale she recounts to her baby brother. This allegorical tale weaves in and out of the main narrative, resonating with everything that is happening in the present, and Twomey animates this in the same cut-out style of the intro.

The Breadwinner deals with incredibly profound and complex events, and tackles desperately oppressive and existential themes in the process. That it does so with such clarity and accessibility is truly remarkable, and a credit to Nora Twomey, and the wonderful script by Anita Doron and author Deborah Ellis. By the time the bombs start strafing the Kabul skyline, the film has morphed into a heart-stopping thriller, as each thread of the narrative races to a conclusion that is both incredibly moving and intentionally uncertain. Who knows what lies ahead for these characters.

The Breadwinner is a stunning evocation of a perilous time in recent history, but also a film about the power of storytelling. Set as it is during a time when history and learning were considered subversive and threatening to the thuggish regime, the film reminds us that we learn so much from the sharing of stories. They can soothe us during the darkest times, empower us when we are weak, and help us make sense of a world spiralling into chaos.

This blu-ray release comes with a decent selection of extra features, including a feature length commentary track with Nora Twomey, Jeremy Purcell who supervised the Storyworld sequences, animation director Fabian Erlinghäuser, and art director Ciaran Duffy. There is also an intro to the film with Nora Twomey and executive producer Angelina Jolie, and a selection of short behind the scenes featurettes, and cast and crew interviews.