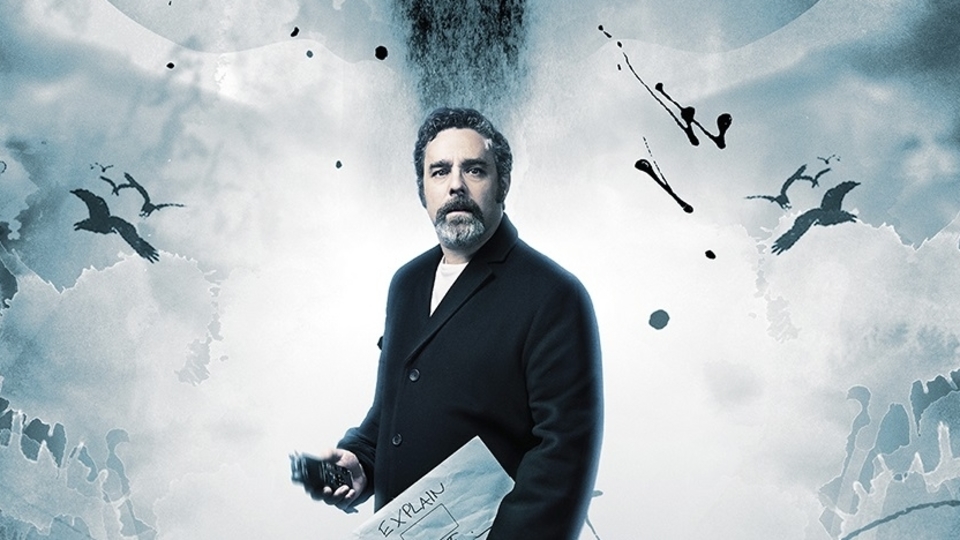 Traditional horror gets turned on its head in this week’s brand new home entertainment release; Ghost Stories. Written and directed by Andy Nyman and Jeremy Dyson, and based on their successful stage show of the same name, Ghost Stories tells the tale of paranormal debunker Professor Goodman (Nyman) who investigates three unexplained cases that leave a particularly haunting mark.

Andy Nyman is no stranger to the world of stage and screen. Most recently seen in The Commuter with Liam Neeson, Star Wars: The Last Jedi and Minions, his next project sees Andy Nyman teaming up with Dwayne ’The Rock’ Johnson, Emily Blunt, Paul Giamatti and Edgar Ramírez in the highly-anticipated Disney adventure Jungle Cruise.

We caught up with Andy Nyman during his promotional tour for the DVD and Blu-ray release of Ghost Stories to discuss all things spooky, the long journey Ghost Stories had from stage to screen, why ghost stories still resonate with audiences and even an ode to Die Hard thrown in for good measure!


What first inspired you and Jeremy to write the stage play for Ghost Stories and could you tell us a little bit about its long journey from stage to screen?

Sure… Jeremy and I met when we were 15 at summer camp. Perfect in a lot of respects, because summer camping doesn’t really exist like it does in the States! So you automatically imagine that it’s Friday the 13th and Camp Crystal Lake!

We just happened to go – we didn’t know each other and we were 15, and happened to be in the same dorm – of about 5 people. This was 1981, and within about 5 minutes we realised that we were both obsessed with horror films, video nasties and ghost stories. We also had this dark and filthy sense of humour and that was the basis of a friendship that still (thank God!) is going strong!

We started writing the play around a decade ago really, and basically I’d just been doing films and had taken a break from theatre. Jeremy and I had also talked about how fun it would be to work together. I was busy and successful doing acting and Jeremy was busy and successful doing The League of Gentlemen, and all the other stuff he was writing. Then I did a play, my first for 10 years, which really reignited my love for theatre. It was such fun! And I suddenly had this notion…

I had seen The Vagina Monologues; which is three women, sitting on stools, talking about vaginas and things around that, like its place in literature and politics etc. So I watched that show, and at the same time I had walked past The Woman in Black, which has been running for 25 years – a brilliant play. It struck me as insane that there has never been another ghost play. It’s like saying you can’t have another musical because you have Cats… So I phoned Jeremy up and said I think I have an idea – kind of like The Vagina Monologues but with ghost stories.

So three men – sitting onstage – telling ghost stories. That was the kernel of the idea then.

And very quickly, and without us even realising it, it became our love letter to horror like Abacus and Hammer House of Horror etc. And we realised that we poured our heart and soul into that, and that’s one of the ingredients which made the play so successful I think, seeing two shades of horror film onstage. And also the conceit of ‘how scary can a play be?’ We know that, and that’s the game we play with the audience.

We also wanted to do something contemporary – The Woman in Black is a brilliant play, but it very much lives in that Dickensian , Christmas, English world whereas Ghost Stories was utterly contemporary in the world of a horror film. We really didn’t expect the play to explode in the way it did, nor did we expect it to run for 26 months in the West End and go all over the world. It’s literally been everywhere and it’s amazing!

So we then spent the next 18 months rewriting the play, because the show was very different. The play is the clichés of the horror films onstage, and that makes it exciting. But if you take that and put it back onscreen they become clichés again.

So it’s a fine balancing act…

It really is! How do you make things feel exciting and familiar as opposed to ‘how many times have I seen this?’ That’s a really interesting challenge and hopefully one we succeeded in, but who knows?! You just don’t know. It can only really work to please yourselves and then hope and pray other people get it, and like it. So once we had written our version of the play as a film, then you are sort of going into the world of producers and talking to the people you’d like to work with. Warp Films were a company that we both loved and admired, and a film they just had great success with was ’71, which was directed by Yann Demange. I spoke to Yann to ask him what it was like working with Warp and he said ‘absolutely fantastic, they totally support your creative vision, and they are wonderful to work with’. And he was right! They were just a joy.

You could interview me all day about the process of making a movie, because it’s a house of cards that’s built on quicksand! It’s an extraordinary process – a fascinating world… it’s a miracle anything ever gets made! Let alone anything getting made in the way that you want to make it.

So do you think your friendship with Jeremy particularly helped during those stressful times, because you have a short-hand with each other?

We do have a short-hand – that’s a very perceptive question because there’s a real strength in having someone else with you, but you really have to work at that strength because there’s also a massive potential weakness… which is, you are leading a battle. You’re leading an army of people – literally. So if you’re not unified as leaders it’s a nightmare. So we were very, very aware of that and very diligent into putting a huge amount of work into what we wanted as a unified team. And also, what we wanted as friends. The most important thing, barring the film, was to not ruin the friendship. So there’s an awful lot to wrestle with.

I heard a quote once ‘Success is determined by the amount of difficult conversations you are willing to have’. And that’s a really interesting notion because the reality is you have to have those conversations – where do we perceive problems to be? We should talk about them now, rather than on-set. So we were good at having potentially difficult conversations up front with each other to protect ourselves, and it really worked. It was a very relaxed set, we had a great crew. It was tough, of course, but we never dropped a scene, never dropped a day, came on budget, maybe a little under budget, and this was a ridiculously ambitious shoot.

Why do you think the classic ghost story still resonates with audiences?

Well Jeremy and I are very old fashioned and ultimately we believe that audiences aren’t ever changing. We think that people are people, people love a great story, they always have and they always will, and your duty as a filmmaker is to entertain and take your audience on a good journey. That’s why you can watch a black and white film touching on a hundred years old, and the great ones are still great. You can dress them up with technology but if the story doesn’t work then it doesn’t work. Those classic films are classic for a reason, and we still feel like that. You can see these films that will take billions but you go and see some films and within a few minutes you don’t know what the fuck is going on, I don’t care about anybody and yes, it’s spectacular, but I’ve looked at my watch three times. And it’s not about budget. You can see another film with a tiny budget or a giant film that just works.

Die Hard is a great example. That film is an amazing movie because the story is so brilliant, and every single beat of it has been worked on and thought through. Every bit of information pays off, there’s no fat on it. It’s fucking brilliant! And that will be brilliant 50 years from now… because… how can it not be brilliant?! Similarly, there are a million different films that came after it and tried to follow the same template and aren’t so good.

Horror and ghost stories are always going to be there. It’s interesting to think that people who don’t like horror, or dismiss it, miss that it serves a very particular purpose –be it discussion, or pushing the envelope for drama etc. Saw is another example of a film that will stand the test of time because it’s so brilliantly constructed and has something proper to say, which is ‘stop whining about your fucking life!’. It’s very easy to be flippant about horror but when it’s good and when it delivers, it’s important art. It’s hard to say that and not sound pretentious, but it has a proper, important purpose.

Ghost Stories is out now on Blu-ray, DVD & Digital Download.