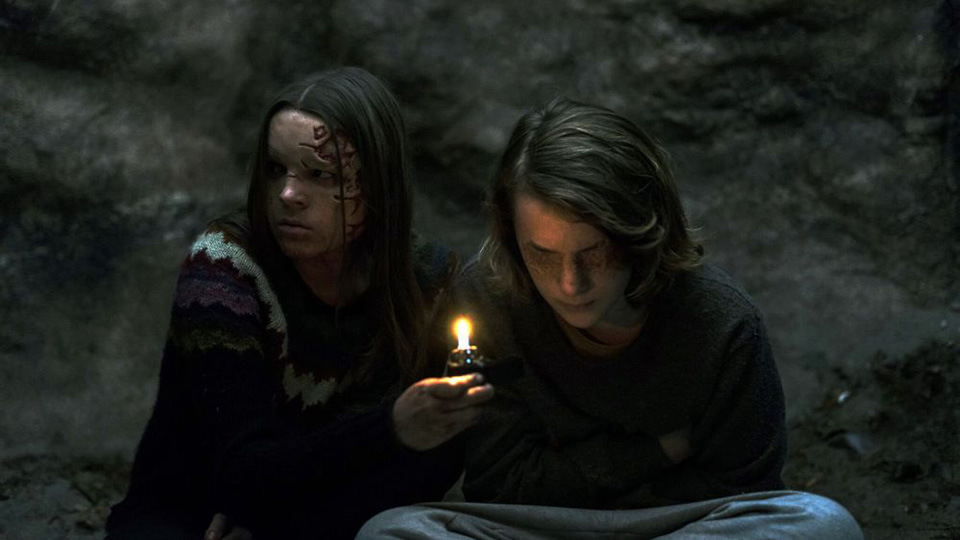 The legend of Devil’s Den is infamous. The woods around it haunted by a monster that feeds on human flesh and kills indiscriminately. On the run from police, Josef (Karl Markovics), runs to the one place he thinks no one will dare look for him. Once ‘safe’ Josef encounters the monster, a dead girl who just wants to be left alone, in her home. However, the arrival of Josef changes the future of the Devil (Nadia Alexander) of Devil’s Den and that of the boy he had kidnapped, Alex (Toby Nichols).

In a single word, this film is clever.

In the oddest of ways this is a coming-of-age movie for a teenage monster who died in gruesome circumstances and who has killed any adult that has come near her, as adults have proven themselves to be untrustworthy. So, her encounter with Alex, someone her own age, who evidently can’t and won’t harm her and doesn’t know she looks like the descendent of Linda Blair in The Exorcist, is the first positive human interaction she has had in a long time.

Bonded by the abuse they have separately suffered and the physical scars that mark them, they soon become a team. Mina helping Alex for human rather than monster reasons and Alex completely accepting that she kills people. He brings out her kindness and she helps him break free of the figurative bonds still tying him to his captor and keeping him from his family.

The changes in Mina’s personality are not as obvious at first, as you have no idea what she was like before the start of the film. The physical changes are subtle, and the make-up department do a great job. There is moment just before Mina realises the physical changes that the audience notice it and it’s a great moment. Mina runs with the changes, all told by the looks of wonder and awe of Nadia Alexander, who effortlessly switches between monster and shy teenager. Her ability to play the character, that looks like a monster, as a normal stroppy teen without it feeling weird, is brilliant.

Toby Nichols conveys his fear through some contortionist body movements as he does his best to make Alex small and invisible and he works with the prosthetics of his scarred eyes. The body language shows his growing in confidence despite by being blind and totally dependent on Mina.

Darkness and the associated fear is used in so many ways in storytelling, from the literal lack of light and things that go bump in the night, the creature that darkens your door, a black soul, dark thoughts and the darkness of being blind. The Dark uses nearly all of them, in a film that is actually about bringing things to the light. As I said – clever.