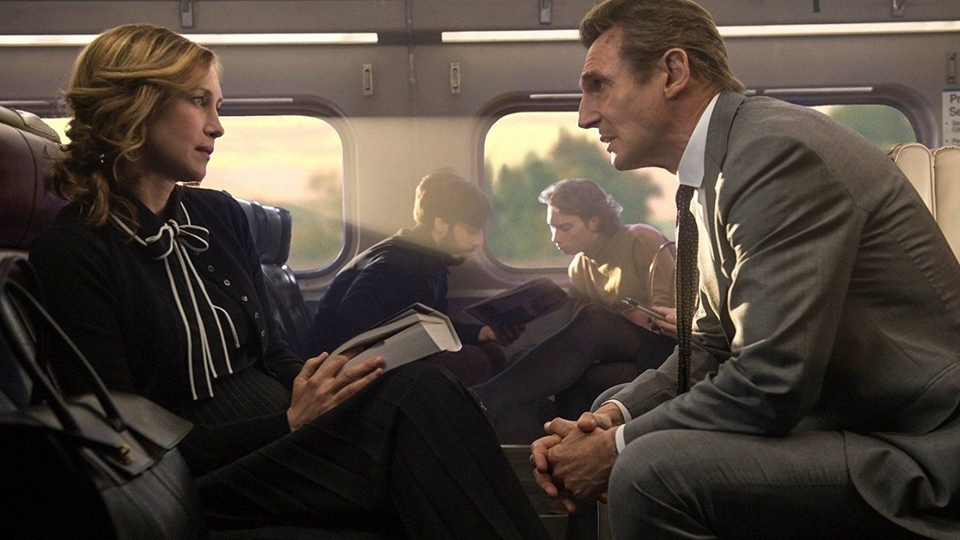 Having worked with director Jaume Collet-Serra for 4 films now (including Unknown, Non-Stop & Run All Night), Liam Neeson once again finds himself in a bad situation. A family-man who commutes into work every day as clockwork, Michael MacCauley (Neeson) knows a few familiar faces on his train travels. One face he doesn’t know belongs to a mysterious woman (Vera Farmiga) who offers him a very intriguing proposition one day during his journey. Find a person who isn’t meant to be on this train and get a large cash reward. As the clock ticks, it turns out that this is a very real offer – but with very real dangers attached too.

The Commuter is a fascinating thriller that genuinely surprises throughout, with plenty of jaw-dropping moments and lots of questions and conundrums to pose to its audience. When you realise the filmmakers themselves don’t know how to answer most of them, that’s when your interest wanes, but there’s still enough here to warrant the admission price.

Neeson is his usual, magnetic self and makes sure The Commuter is worth your time. There’s something about Liam Neeson that just makes him perfect for this kind of fodder. His career post-Taken has been fantastic by setting him up as wonderfully reluctant action star who always finds himself in the wrong place, at the wrong time. Neeson’s natural charm and presence go a long way to keep the audience invested in the story of the film and he always impresses whenever he’s onscreen.

Patrick Wilson and Vera Farmiga take a break from their ghost-hunting duties in The Conjuring and The Conjuring 2 to support Neeson well, as does Sam Neill (Hunt for the Wilderpeople). Apart from the heavyweights, there is also strong support to be found in the carriages of the train with Andy Nyman (Ghost Stories), Shazad Latif (Clem Fandango from Toast of London), Florence Pugh (Lady Macbeth) and Jonathan Banks (Better Call Saul).

Enjoyable but a bit silly, The Commuter is a great popcorn movie that certainly entertains. It’s a shame that after such a calculated build-up full of slow-burn tension, the finale opts for an out-and-out action blockbuster when a little nuance would have gone a long way. It’s best not to think too much about this as the plot holes widen with anything but a passing glance. But nonetheless, The Commuter is a cracking, old-fashioned action-thriller with a perfect lead man. If you go in wanting a fun movie-going experience, The Commuter will dutifully oblige (for most).