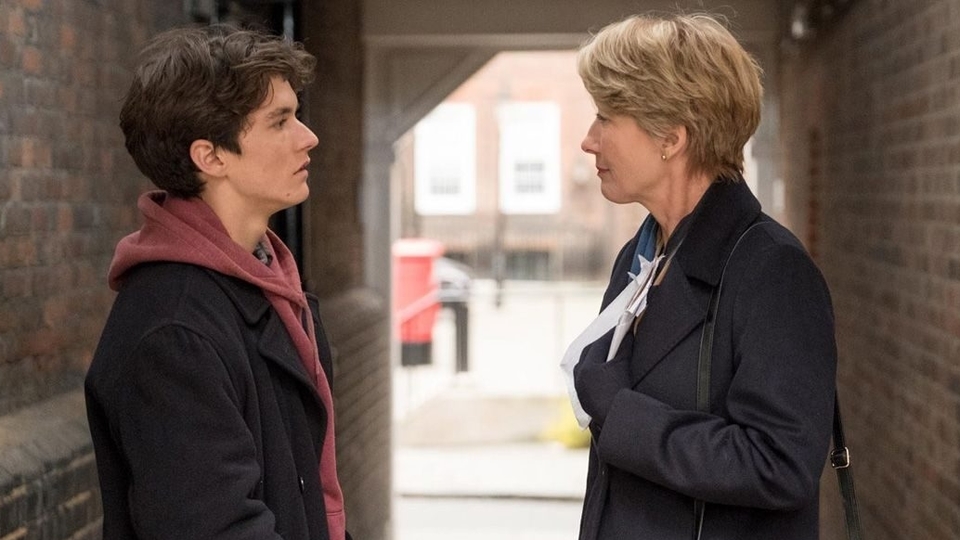 The Children Act is a deeply involving drama based on real life cases about a young man who refuses medical treatment on the grounds of his religion. Emma Thompson plays Fiona Maye, the judge who presides over the case of Fionn Whitehead’s character Adam in a complicated case that proves hard to resolve.

The cast and filmmakers of The Children Act came to London for the UK press conference of the film, with Emma Thompson and Fionn Whitehead joined by the film’s director Richard Eyre, screenwriter and novelist Ian McEwen and producer Duncan Kenworthy.

Check out our full review of The Children Act.

Fiona and Adam’s relationship is unusual and also highly charged; could you describe how each had an effect on the other?

FW – I think Adam is so enraptured with Fiona and she introduces him to a world of possibilities he hasn’t known, having been quite sheltered before. Everything that she represents and the world that she comes from is an awakening moment for him.

ET – She really listens to him and takes him seriously. I think we all have had that moment, maybe you haven’t, but that first adult who listens to you and takes you seriously. It has a huge effect on you because they think your opinions or what you have to say has worth. And that’s a massively important moment… because she, I don’t think, expects what she finds. She expects a child that has been sheltered and perhaps not been well educated – perhaps a bit ordinary and perhaps even a bit dull. Then these assumptions are blown away by this flame of life that she encounters who then turns her listening around, by listening so hard and then asking her very direct and difficult questions that she has no choice but to answer.

He transfers a lot of stuff, and she has a parental reaction. She has this maternal response. It’s very powerful and a multilayered thing.

Duncan, you’ve produced some of our best loved movies but the London we see in The Children Act is very different to Notting Hill or Four Weddings and a Funeral for instance. I wonder how crucial was it to get access to our legal institutions and who was helpful in that regard, getting that access.

DK – Well we were determined to make it authentic – there’s no point doing a fictional world when the real one is there. But if we hadn’t had our legal consultant Sir Alan Ward (a former judge of the Court of Appeal of England and Wales) then we would have never had the keys to the kingdom. Sir Alan was a great friend of Ian’s and, in fact, was the reason that Ian wrote the novel in the first place. Some of the cases in the novel are inspired by some of the cases he presided over.

He’s an extraordinary man, now retired, but his name opens every door in the legal world. With one phone call he got us a meeting with the Under Treasurer of Grays Inn, who is the actual person who calls the shots. So Ian, Alan, Richard and I went to see him and spent two hours sitting across the table. They were amazing, so we were given all this free access to the real places where the story took place.

The concert at the end of the film takes place at the Great Hall at Grays Inn, a room in which one Shakespeare play, I can’t remember which, was premiered, apparently for Queen Elizabeth. It’s so extraordinary to think about that! The apartment where Fiona and Jack live used to be Alan Ward’s apartment, and is now Joshua Rosenberg’s apartment and is exactly where we filmed it. The interior we built at Pinewood. I’m sure you all want to live in that apartment after seeing the film!

The courtroom was built too because we didn’t want to film in the one courtroom that everyone uses and films in for all the TV shows etc. So ours is based on the actual courtroom in the Family Division and was built as an exact replica. That’s part of the pleasure of the film, getting entre into this real legal world.

It was great to see Jason Watkins as the Clerk. Can you talk a bit about that character and the changes from the novel to the film?

IM – The Clerk is an extraordinary character. He knows everything… keeping him close, with an unstated knowledge of what’s troubling her. He witnesses her falling apart yet keeping everything together in her professional life. He witnesses the kiss for example, and it’s beyond question that he would never raise this matter with her… so it was a fascination, with us, to bring that to life.

RE – …and just a word on the adaptation from the novel… Reading a novel is a reflective act, and not in the present tense. You rarely sit down and read an entire novel in the one sitting. Whereas film, by definition, exists in the present tense. So the pulse and the momentum of a film has to be wholly different. We were sure that this had to exist as a film, rather than replicate the dynamic of the novel. So there are quite substantial changes to the narrative which were in the script, but were changed in editing after.

Is there a legal precedent for this story?

IM – Absolutely. Alan Ward presided over a case of a Jehovah’s Witness boy, and did go to his bedside. They talked about football non-stop. He ruled that he could be treated against his will. Afterwards, the boy made a good recovery and Alan knew all the directors and took him to a football match.

RE – Manchester Utd I believe…

IM – The boy met all the stars etc, then 7 or 8 years later Alan saw in a footnote that the boy, in his twenties, had got ill again, had gone back to hospital and had died there, refusing a medical transfusion.
Alan told me this story whilst we were waiting for a concert and I thought ‘this is a gift… I’m hearing a short novel’. It rarely happens like that for me.

How closely aligned were you with your characters?

ET – Adam has transferred so much onto Fiona, of his intentions and affections. He’s in love with her in a way that a 17 year-old can be in love with someone that’s much older and unreachable. His letters to her are love letters about his feelings for her and being alive, after looking death in the face. It’s an unusual and highly-charged moment for a young person, because most of them feel those things, but have never actually been facing death. That’s what’s unusual about him.

She is someone who sits above… you sit in court above everyone and have this extraordinary overview… very difficult to not feel omnipotent in such a situation… and suddenly when he notices her she doesn’t know what to do. It confuses her, and in fact she makes some bad decisions about how she responds to him. She is unkind to him actually… I think. And she could have dealt with it much, much better, had she had access to her own emotional landscape. It’s one of those strange borders between your personal and private life.

FW – I think that for Adam, Fiona arriving and deciding he should be transfused opens a world of possibility for him. He gets better and feels better and healthy and I don’t think he ever considered a life after that, especially with his horizons opened up in terms of love poetry and creativity. The interesting thing playing the character is because he’s led such a sheltered life, it’s quite a bizarre thing to try and see the world from the eyes of someone who’s never known these things from birth. He just latches onto her and sees her as his only way in to this world. He is compelled to follow her and in a sense, thinks that she can save him from something.

In these days of Marvel blockbusters is it hard to get a film like The Children Act made?

DK – It’s quite hard! It was not easy getting this off the ground. But when you start with a novel by Ian McEwen, with Richard Eyre directing and you have Emma Thompson starring in it, it becomes a lot easier. But like you say, it’s not a Marvel extravaganza and that’s sort of what movies have become now. All those movies that we watched in the 70s just don’t get made anymore. So it was an act of faith in the end. Everyone will go and see a film with Emma in it

DK – So in many ways Emma was our saving grace. She was perfect for the role too, and we probably would have made the film if she couldn’t do it. To make a serious film with serious intentions is quite hard to do these days.

What was it like stepping into this legal world?

RE – I was with Emma when she was observing, and one of the judges said to me that you have to understand that every single case that we are adjudicating contains pain. It’s the Family Division – so its divorce, custody, cruelty – nobody comes in front of them, by definition, who is just there for a laugh, or have committed a crime and hopes they get away with it. Everybody’s lives in front of them are very severely damaged if they’ve got that far. So constantly dealing with pain.., on one side of the court there are people in agony and on the other side of the court there are people in agony.

ET – That’s so true. The Family Court is where the real drama and the real pain is, and that’s why Ian was so drawn to it for the novel because all human life is there.