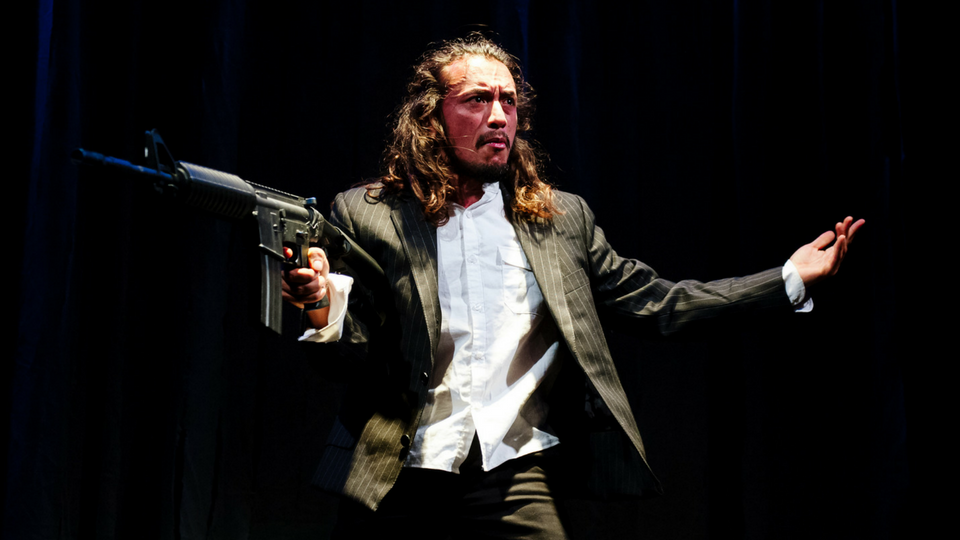 Following successful runs at both CASA and Vault Festivals, Blackboard Theatre has taken its critically acclaimed show Stardust to the Edinburgh Festival Fringe, an irreverent and impassioned original production that shines an unflinching light on Colombia’s heart of darkness.

Stardust takes its name not just as reference to slang for cocaine, known for making people feel ‘more than what they are’ but a nod to the south american belief systems that believe the coca plant, its origin, came from the gods and was made from stars.

Miguel Hernando Torres Umba originated the concept for the show. A creative broadly known for his work in creating immersive theatre including Moulin Rouge Secret Cinema, he was keen to take on a theatre project that struck a little closer to home.

“For many Colombians, and for myself, there is a very personal feeling of discomfort in terms of how we are perceived. The reality around Colombians is that we are judged in very different ways, from throw-away comments and assumptions or jokes to getting stuck for three hours in airport security just because we are from Colombia.”

“There is a pressure that is applied to us that is actually a rooted stigma based on the fact the country is one of the biggest producers of cocaine. The result is to criminalise and dehumanise our population, ultimately implying we are of less value. I decided I don’t want to take this any more. What the work does is break down the barriers between a UK audience and Colombians to enable them to emotionally engage with my story, and connect with me as an individual.”

The one man show has very much been a work of collaboration to hone the message to UK audiences while retaining authenticity and representation of many Colombian communities, from relaying the lives of indigenous communities and the detrimental effect of the drugs trade, to the day-to-day experiences of Colombian production staff living in the UK.

“Collaborating with writer Daniel Dingsdale has allowed us to merge worlds and relate to British and Latin audiences and bring my story to the stage. It has been slightly harder to get Edinburgh audiences to connect with me as they are more reserved than the London audiences, but once I bring them in, using my skills gained from immersive theatre, they are on the journey with me.”

Along the way, the audience is asked to make decisions that affect the outcome of the play. “It lets them into the story because they feel they have a stake in it and a connection” says Miguel.

More widely, the piece asks the big questions around how people in the west measure the value of migrants. “It is getting harder and harder for migrants coming to this country in good faith to stay here. It’s not just about learning English and bringing skills. There is so much more regulation now that contributes to the narrative ‘what are you bringing to the table, why should you be valued?”

It’s not just media portrayal that contributes to negative stigma around Colombia but the arts industry itself, Miguel says, “For decades we’ve seen films such as Scarface presenting Colombians in this negative light.”

Why is the West continuing to propagate this image? And what does it say about the users? A recent crime survey revealed cocaine use is up in middle class and richer households in the UK and declining in poorer income households, denoting the widening socioeconomic divide. Miguel says “this show isn’t about judging users but the reasons why this society has them. Notions of success have created a narcissistic society where people just don’t think of the consequences of what they are doing to themselves or the lives of others to make themselves feel greater than they are. This is what the drug does. We need to foster a society where we support each other instead of constantly trying to reach wealth and consumerism led perceptions of success at any cost.”

When it comes to telling stories through Colombian eyes, Miguel is clear that the purpose of the work is not to validate Colombia, and that the work should speak for itself. “I don’t need to tell people what’s great about Colombia as it should be apparent by the work itself. There is tremendous talent and input from Colombia with the exceptional production values, from everything including sound design that showcases its talents.”

Stardust is an original piece brought to life through a creative collaboration between Miguel and a team including artist Diana Garcia, Luis Bonilla, Angelica Quintero (Colombia), Allison Ozeray (France), Daniel Dingsdale, Luke Harcourt, Alex Marshall Sofi Lee H & Cottia Thorowgood (UK), who believe in the piece as a vehicle to open up a conversation and dissect the human cost on the journey from the sacred coca leaf to racking up a line.

The show is just one of two Colombian shows at this year’s fringe, which includes the talented Circolombia at Underbelly’s Circus Hub on the Meadows.