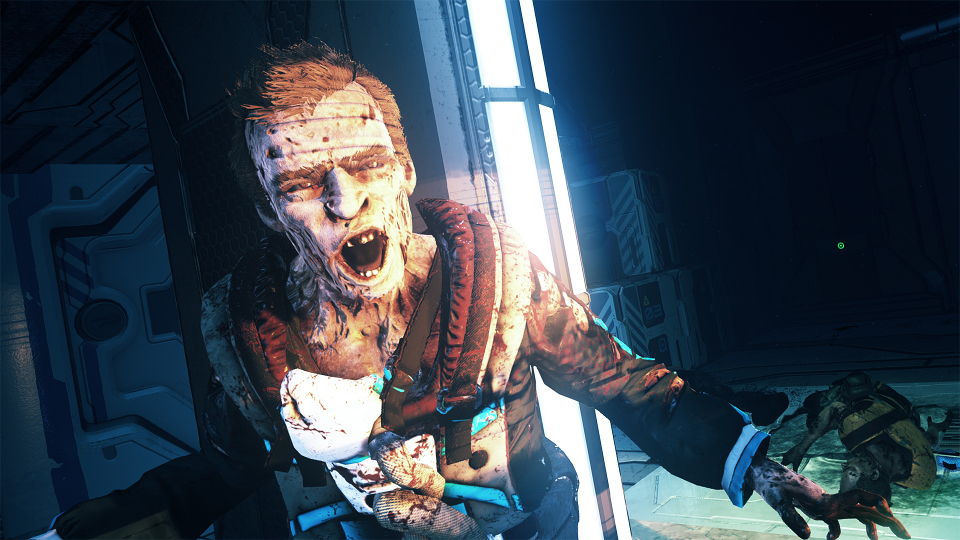 The Persistence is a new VR sci-fi horror roguelike from developer FireSprite games. It’s set aboard a deep-space colony ship, also called The Persistence. During the ship’s last jump, something went wrong and it landed in the pull of a massive black hole.

Players take the role of security officer Zimri Eder who was killed along with the entire crew of The Persistence when things went bad. Fortunately the ship has a clone printer and you have been successfully cloned along with your digitised memories and personality. Your task is to make your way through the five decks of the ship in order to bring the engines back online and escape back to Earth.

This is easier said than done however, as while the clone printer has been able to restore your life, things aren’t so great for your fellow crew. The black hole has caused corruption which has led to a variety of mutated clones of everyone else all over the ship. To make things worse, the mutant clones are out for your blood.

Watch The Persistence launch trailer below:

Death tends to come quickly in The Persistance but each time you die you can be brought back as a fresh clone. I was worried repeating sections over and over again would get tedious. However, the game keeps things fresh with the use of procedural generation. Each time you die the layout of the ship completely changes.

Initially to progress you really need to rely on stealth, hiding in the shadows and listening carefully for dangers. There’s an incredibly unsettling atmosphere and you feel vulnerable and exposed. Your starting weapon is called the Harvester and it can be used to collect stem cells from mutants. To do this you need to creep up on them from behind before jamming it into the back of their neck. It’s a bit gruesome but better than fighting them head on.

When you do get into a fight (if you don’t scream and take the PSVR headset off) your options are initially limited. You have a limited use shield that can be used to parry attacks and then if you time it right you can use the Harvester to bludgeon your enemy to death. It’s brutal and takes practice to succeed. Often you’re better avoiding conflict by taking an alternate route or teleporting to a different level.

The stem cells you collect can be used to upgrade your clone at DNA Sequencers. Things start to get a little easier once you’ve managed to find enough to expand your health and strength. In addition you can also collect FAB chips which are a currency used at weapon and gear fabricators. Here you can create new suits, items and print and upgrade weapons. Once you unlock weapons it’s possible to rely a little less on stealth if you wish.

The game is controlled by looking around with the PSVR headset in conjunction with the DualShock 4 to move and perform actions. This system works well but I was a little disappointed that there isn’t support for the PS Move controllers which I think would have worked well for this kind of game.

The rooms of the ship tend to all look quite similar and it can be a little disorienting to find your way around. To help with this, door buttons change colour once you’ve opened them to let you know you’ve been that way. Also to point you in the right direction is a map accessible via the touchpad. If you know where you want to head next you can also set a marker to act as a waypoint.

Another option if you want a little more help is to grab a friend who can then help you out by using the Solex companion app. Available for iOS and Android devices, the app lets a friend ‘hack’ into the ship’s engineering system. Once connected they can open doors, disable traps and lure enemies. It’s a neat system but friends also have the option to be rewarded for mischief. As the player you can access in-game Solex panels to upload a virus to get them back.

A first playthrough of the game is likely to take around 8 hours. Completing it unlocks a survival mode that gives you a maximum of 10 clones to complete it again. The game logs your completion times as well to encourage competition against your friends and your best time.

I had a lot of fun with The Persistence and would recommend it to anyone who enjoys VR horror titles. The procedural generation and roguelike elements keep things fresh and give plenty of reasons to go back for more. It’s a hard game that takes time to master but it’s well worth the effort. It might be a bit too much though for nervous players so be careful if you scare easily.

The Persistence was reviewed using a digital code supplied by the publisher.

Advertisement. Scroll to continue reading.
In this article:Firesprite, PS4, PSVR, The Persistence