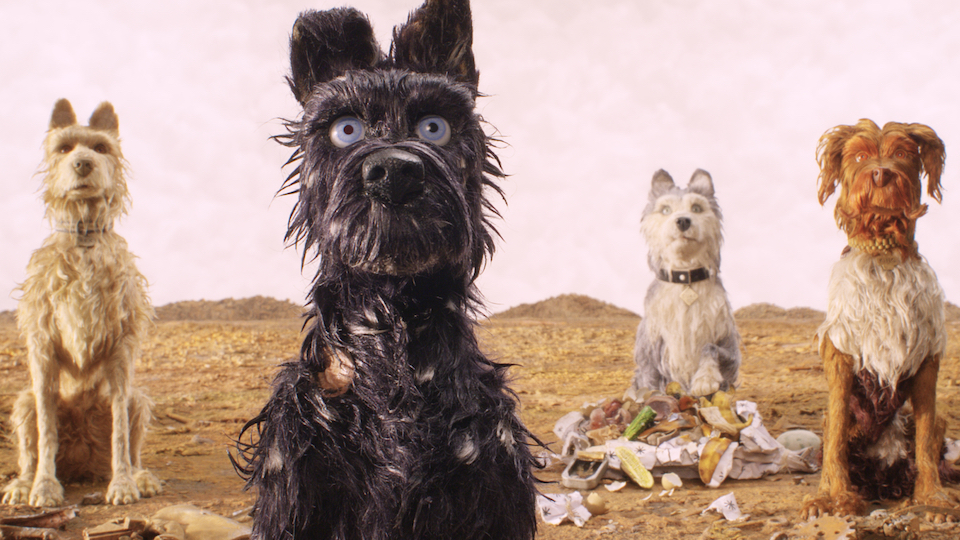 What did kids think of this movie? I’d be fascinated to know, because despite it being an animated film featuring talking animals, it is most certainly not a film for children. There is nothing remotely cute or cuddly about Isle of Dogs, the latest film from Wes Anderson. Let’s be clear, a stop-motion conspiracy-cum-adventure movie about disease-ridden dogs living on an island of garbage off the coast of Japan ain’t exactly Cats and Dogs now is it?

The plot centres on Atari (Koyu Rankin) the nephew of Kobayashi (Kunichi Nomura), the evil, dog-hating Mayor of Megasaki. Following an outbreak of dog-flu, Kobayashi exiles every canine in the city to Trash Island, which is exactly what it sounds. As an act of good faith to the people of his city, the first dog exiled is his nephew’s dog Spots (Liev Schreiber). Needless to say, Atari embarks on a dangerous mission to rescue his dog.

Once on the island, Atari encounters the pack of “indestructible alpha dogs” who in reality are anything but that. There’s Chief (Bryan Cranston), Rex (Edward Norton), King (Bob Balaban), Boss (Bill Murray), and Duke (Jeff Goldblum), all scrapping to survive on the island. They team up with Atari and set off in search of Spots, and on the way discover a conspiracy hatching on the mainland that threatens them all.

Although animated with extraordinary detail and precision, from a narrative perspective this is easily the most freewheeling film Wes Anderson has ever made. Like most of his films it is told in a novelistic style. There are chapters, and a prologue, there are flashbacks, random cutaways, fourth wall breaking, and narrative segues that go nowhere. Only the dogs speak English, and the dialogue for most of the Japanese characters isn’t subtitled. When it is, it is done in the traditional tategaki format of top to bottom.

With everything that is happening on the screen, there’s a certain manic slapstick energy that will certainly appeal to younger viewers. The fight scenes are particularly fun – a cloud of cotton wool dust with random limbs appearing mid scrap. However, all of the frenetic storytelling adds layers of narrative and structural complexity that Anderson acolytes will adore, but may well alienate kids simply looking for a fun doggo movie.

That being said, I have long maintained that to fully appreciate the films of Wes Anderson you need to be tuned to his very particular comedic frequency. If you are already in that bandwidth, then you’re in for a world of puppy snaps treats, because Isle of Dogs is an absolute riot. The humour is of course as dry as the barren wasteland of Trash Island, but is frequently of the laugh out loud variety. The running gag about the dogs holding votes to decide their next course of action is brilliant. When one of them begins to uncover the truth about his past, he fearfully asks the question, “was I the runt?”

In news that will shock no one, the film is stunningly gorgeous. Every frame is a masterpiece of detail and exquisite artistry. Drawing heavily on traditional Japanese culture, history, and the cinema of Ozu and Kurosawa, the film is imbued with a unique style and rhythm, though this has led to some stinging criticism of cultural appropriation being levelled at Anderson. I think in truth he is just in love with the country and its culture.

A final word on the cast – it is so vast and starry there is very little room for any one to make an impact. With most of the cast adopting that pedigree deadpan Wes Anderson delivery, they tend to get lost along the way. Only Bryan Cranston and Ed Norton are the real standouts. Nonetheless this is a charming and heart-warming film, visually enchanting from first minute to last.