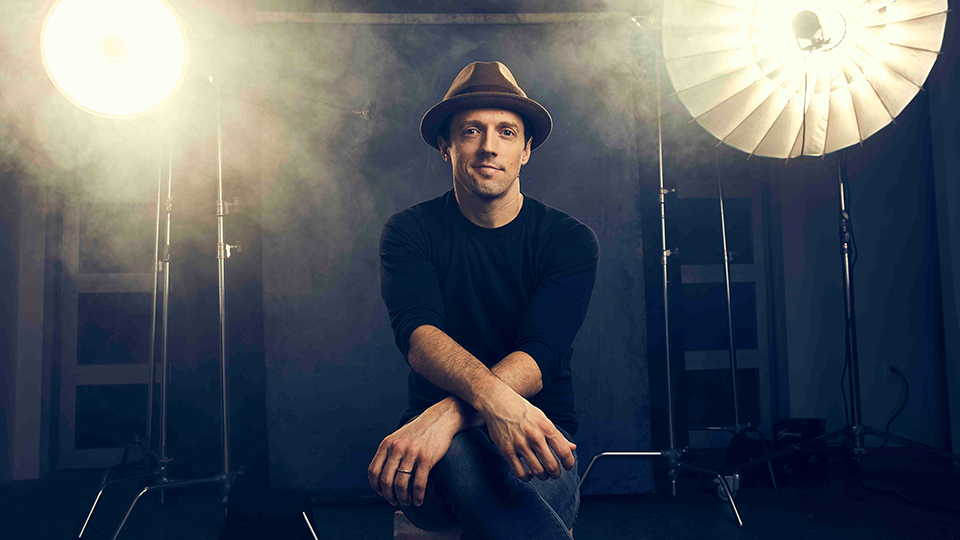 Singer-songwriter Jason Mraz first exploded onto the music industry in 2002 with his debut album Waiting For My Rocket to Come.

He scored his international breakthrough in 2008 with I’m Yours and its parent album We Sing. We Dance. We Steal Things. Following on from the huge success of his 2014 album Yes!, Mraz is back with new album Know. released on 10th August 2018.

I sat down with Jason when he was in the UK recently to talk about his optimistic new record, find out the meaning behind lead single Have It All, and to discuss his Broadway debut.

Your new album Know. is very optimistic and hopeful, and quite romantic in places. Was there a concept you had in mind when you were recording it?

Well I knew that the follow up to Yes! should be Know. and so I challenged myself and said, “well what do I know? What do I really know? I know that love is still the answer and always will be. I know that I know nothing. I know that we all need comfort to help us avoid suffering or at least keep it to a minimum’. It was that kind of attitude I went in there with and helped curate the final play list. It was a lengthy process with lots and lots of songs before we got to where we are.

As an artist and a songwriter is it quite hard to pick the final track list for an album?

It is. I mean some really make sense and you know it right away. Other ones you think you know it but then time tells you, ‘you know this really isn’t your best guess choice’ or a committee tells you that as well.

Does making music by committee with the label having some input and taking some of that creative control make it harder or easier?

You know what, it’s both. It’s 50/50. It’s challenging but it and yet it makes it easier. Challenging because you continually send stuff in and most of it is rejected but that also shapes you into being a better artist, better writer, better player, better performer and better person to work with because you don’t take those rejections personally. You rise above it and go, ‘OK well how can I rethink this situation and solve this problem?’ I think it makes you a better scientist.

The album’s lead single Have It All really embodies that optimism that runs through the record. It feels like the kind of song we need right now in this dark world. Tell me the story behind that song…

In short, it’s a song of peace that originated from a peaceful statement that I heard in Asia, which was translated to me to mean ‘may you have auspicious and causes of success’. I just thought that was a very bizarre salutation. It doesn’t sound grammatically correct and I even had to look up auspicious because at that point in my life I really didn’t truly know what that word meant but I loved it. I love geeky multisyllabic words and phrases. I took to writing it and wanted to sing it and have more lines like it, all for this goal of having a musical greeting card or commencement speech or toast. That’s really what it is. I think it’s a toast. It’s for a bride and groom, it’s for someone retiring, it’s for kids graduating and it’s for any human who’s entering into a new chapter in their life. I love ceremonial songs and I had yet to write a ceremonial song that sounded like a toast and/or a parade.

It feels like a big song. It feels like something that’s going to have a lot of life and I’m looking forward to hearing it live…

Great! It sounds great live because the girls I wrote it with Raining Jane, they’re in my band, when they sing the chorus you’re like, ‘yeah there’s the chorus’. When I sing it it’s like, ‘oh yeah he’s singing a song’ but when they sing it with me, and they’re the same girls I did the Yes! album with, that the chorus just leaps and it just flies. It’s meant to have gang vocals on it.

The second track released from the album is Unlonely. I feel like that song is more of a nod back to Waiting For My Rocket to Come…

Your sound has progressed a lot from album-to-album. Was it your intention to pay homage to where you came from?

Yeah. You know what, it’s just that all of my other efforts haven’t made it onto a record in ten years. All my other goofy rappy efforts just haven’t made it onto an album and I don’t know why this one did to be honest with you. Maybe because it’s rappy, it’s goofy but it’s still a touch smart, hopefully. It’s not just me trying to get laid, which is a lot of my other rappy things, or it’s me not going, ‘look at me’. It’s really, ‘how can I help you be unlonely?’ It’s less about me and more about you. At least that’s the story I’m telling myself. The production helps too, it came out really great. It’s kind of a classic groove that the record needed, less melancholy than other things I was writing.

You made your Broadway debut in Waitress earlier this year. What was that experience like and did it inform this album in any way?

It didn’t inform the album directly but it informed who I enjoy being, which is a performer. I just enjoy being a performer. I loved the Broadway thing because I wasn’t in charge of the messaging or the content, I just got to be a performer and that was a joy. I felt like a kid. That informed me going into this project like, ‘look the content is now written, don’t be married to it, don’t sweat it, just be a kid and have fun performing’. I can sweat it last year and the year before that when I was trying to write the stuff but you know life is short. I think that’s what informed me on Broadway was, ‘I’m only going to be here for four months. Enjoy it’. In life it’s a similar thing really here for a couple of decades so you might as well enjoy it.

Would you like to do more performing on Broadway in the future?

It depends on the show. It’s not something I’m going to pursue but if it was the right show and the right song, I would entertain it. It was tons of fun.

Will you be doing any headline shows here in the UK this year?

Not this year but probably in the spring of 2019. We’re still working on those dates. (Since this interview Jason has announced a tour for February and March 2019)

I’ve still, after all these years, never seen you live. Every time you tour, I’m on holiday!

Oh bummer! Well you’re probably in holiday in March of 2019.

I have no plans…

Ok great! I think the last time we were here we did Royal Albert Hall with Raining Jane probably in 2015. I’m setting my sights on the same ambitions to bring the band back and do nice venues.

Is there anything else you’re going to be able to pack in before the end of the year?

We’re going to tour all summer and then we’re going to tour again in the fall in the U.S. and that will give me about two months off but that’s really to go to weddings and I will have to do a little bit of travel with some gigs in there. Maybe spend a good month of that time at home because honestly for more than a year at that point I’ll have just being charging it from finishing up obligations last year to going straight into the Broadway thing, which led straight into this record and straight into promo and straight into touring. I think by then I’ll have spent maybe three weeks at home in a year. I’m very much looking forward to October.

It’s not rest, it’s just being in one place, being with the wife, being with my cats… we have different gardens and we have fruit trees and you come home and that garden is gone. It’s harvested already and it’s fallow and you missed it or the fruit trees came and went, the harvest came and went and you missed it. I feel left out sometimes. There’s just other interests I want to pursue, and that will eventually happen, but not this year.

Jason Mraz’s new album Know. will be released on 10th August 2018 through Atlantic Records. You can see Jason on tour at the following dates in 2019: