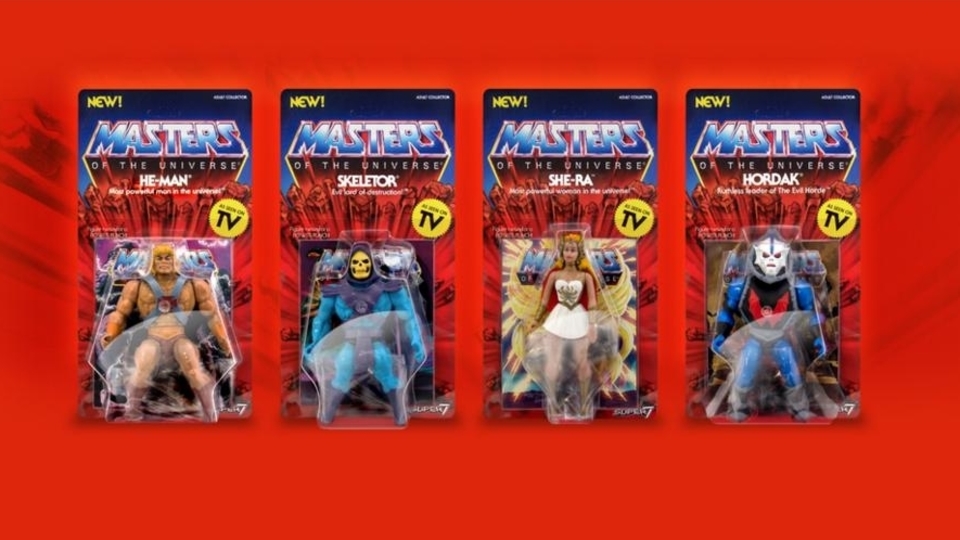 He-Man and the Masters of the Universe and She-Ra: Princess of Power were two of the best toy lines and cartoons of the 1980s. Full of amazing, larger-than-life characters and one of the greatest TV theme tunes ever made, He-Man and She-Ra became fond favourites for millions of children the world over. A new, retro-inspired TV commercial has arrived for a brand new set of Masters of the Universe action figures due to be released soon.

Super 7 have a set of 4 Masters of the Universe characters up for pre-order to mark their first wave of figures. These are the classic designs of the original figures, but with a paint-job that mirrors their looks from the classic Filmation TV series.

The first wave is fantastic, and is made up of all the principal characters – He-Man, Skeletor, She-Ra and Hordak!

A live action movie came out in 1987 starring Dolph Lundgren as He-Man and Frank Langella as Skeletor. Whilst being panned by most, I think it has a lot of charm and is great fun to watch. Granted it’s not the Masters of the Universe film we should have got, but it’s the only one we have, so I look back on it quite fondly.

And speaking of Masters of the Universe on the big screen, a reboot has been talked about for decades with various creatives hired and then fired from the project before it’s really taken flight. One thing is for sure, He-Man and the Masters of the Universe deserve a proper cinematic adventure, with the scale and depth of a Lord of the Rings film – such is the rich back-story to take inspiration from.

Super 7 have got a lot of amazing He-Man and the Masters of the Universe goodies available for purchase. Along with these figure they have a MOTU Classics and a MOTU Club Grayskull line which always sells-out. There’s plenty of retro-inspired fun on their website, check them out – https://super7.com/

As for She-Ra, she will soon be heading to Netflix (around November) for a brand new animated series. With a contemporary animation style, the early teasers have split audiences but it certainly looks to be an unmissable watch.

The series – now titled She-Ra and the Princesses of Power – stars the vocal talents of Aimee Carrero as Princess Adora, with AJ Michalka as Catra, Sandra Oh as Castaspella, Lorraine Toussaint as Shadow Weaver, Christine Woods as Entrapta and Keston John as Hordak.

Check out the first image from Netflix’s She-Ra and the Princesses of Power.

As for these Super 7 Masters of the Universe figures, they will be highly sought-after and are thankfully not a limited-edition run, like a lot of their lines. But you’ll still want to get your hands on these amazing looking figures soon because they really are awesome, including some amazing artwork inspired by the original pack designs.

And to relive the past some more, check out the iconic opening credits to He-Man and the Masters of the Universe and She-Ra: Princess of Power from Filmation – by far two of the greatest cartoons and theme tunes ever made!