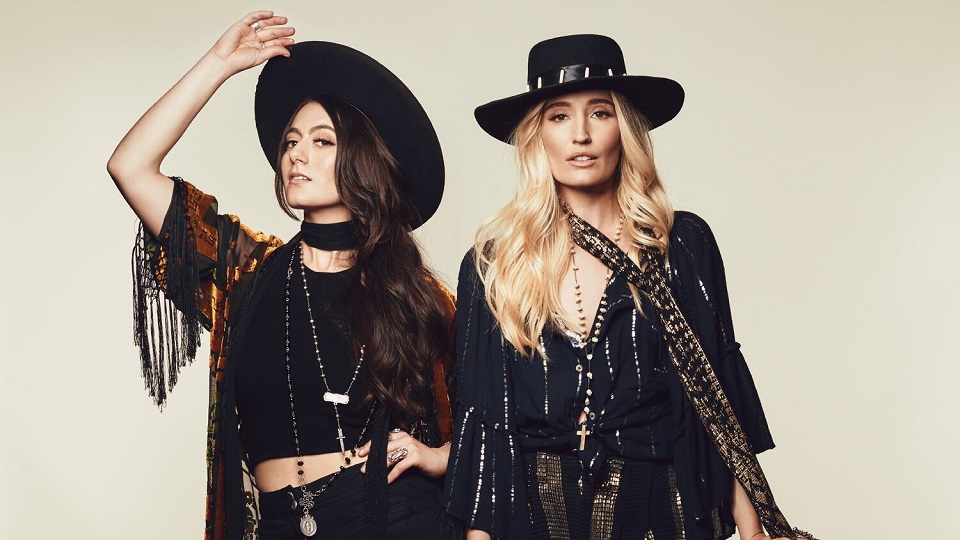 With both of them coming from musical families, it was almost inevitable that The Sisterhood Band – made up of Alyssa and Ruby – would follow in their footsteps. Alyssa’s parents perform together in the band Bailie and the Boys, and Ruby’s dad (who encouraged the duo to perform together) is rock royalty Rod Stewart. With several trips to London under their belt already, the duo returned to perform at Nashville Meets London on a rainy Sunday in Canary Wharf.

The pair opened their set with Walk Away, a track from their debut release The Summer Setlist. It’s an uptempo, sassy number which highlighted the contrast between Ruby’s powerful vocals and Alyssa’s sweeter tones. They were incredibly animated on stage and I thought their voices sounded really lovely together. Next they played the rocky 13, giving Alyssa a chance to show off her great guitar playing.

Throughout the performance the girls regularly encouraged the crowd to sing and clap along, as well as chatting to the audience, telling the stories behind their songs and joking about the bad weather. I also liked that they frequently broke off to jam together, crowding around the same microphone as they sang. They came across as incredibly warm and friendly and it’s clear they’ve got a great friendship both on and off stage.

Although they mainly stuck to songs from their debut record, the band also threw in a strong cover of Fleetwood Mac’s classic Landslide. It was a nice change of pace from their more uptempo numbers, with plenty of folk influence and showing the delicate side of their voices. They also put their own spin on Rod Stewart’s Gasoline Alley, which had plenty of soul alongside rich vocals.

One of the standout moments for me came early on, when the duo performed Closing In From Miles Away. It’s a song with really evocative mountain imagery, a stomping rhythm and an anthemic chorus, and plenty of passion from Ruby who almost yelled her vocals at one point. The lively, toe-tapping Tenderise My Heart and stripped-back ballad Someone’s were also highlights, showing off the band’s ability to switch effortlessly between more uptempo numbers and gentler tunes.

The band closed their set with Half Way, a break-up song which talks away waving goodbye to an indecisive ex. It’s an uptempo number with a rock edge which showed off the soul and power in the girls’ voices, as well as their gorgeous harmonies. They were clapping along and dancing throughout, and the crowd responded in spirit. It was a really positive note to finish on and made me keen to see what they’ll do next.

Overall I was very impressed with The Sisterhood Band and thought they showed great potential. Their music has country, folk and rock influences, with a good balance between slower songs and more upbeat tunes, and their harmonies are beautiful. They’re currently working on their debut album and I’m excited to hear more from them soon.

Advertisement. Scroll to continue reading.
In this article:Nashville Meets London, The Sisterhood Band