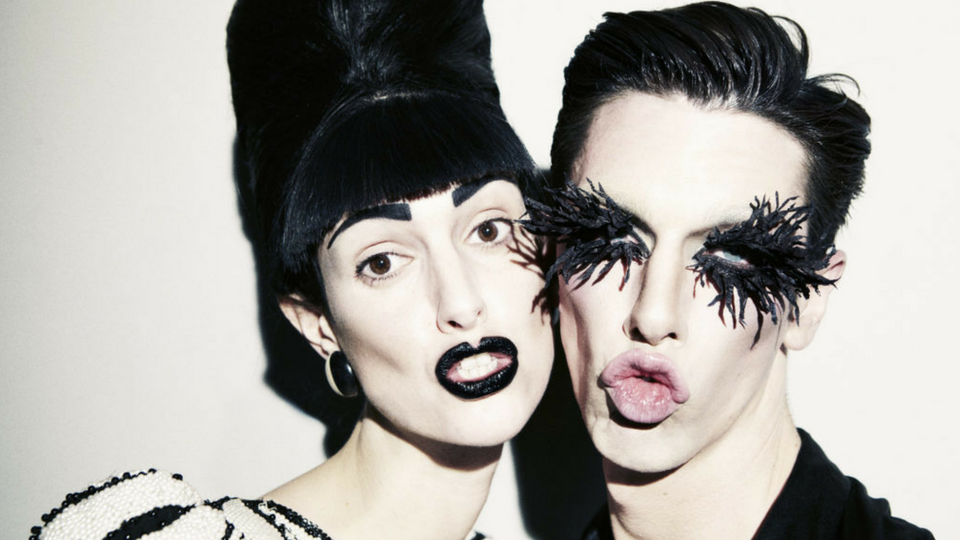 What goes into making our future drag kings, drag queens and cabaret stars? According to the Soho Theatre, keen to nurture young vibrant talent, it involves an intensive series of Cabaret and Drag Lab classes with cabaret act Bourgeois & Maurice (Liv Morris and George Heyworth).

I popped along to the showcase of the development pieces by participants of their most recent intake, thanks to the the Soho Theatre Young Company (SYC) to check out their promising works in progress.

We were greeted by Bourgeois & Maurice to a booming soundtrack courtesy of Lady Gaga, with an immensely warm audience in the downstairs cabaret-seating theatre. The temperatures rising outside were no match to the anticipation for hot-off-the-press acts. A packed bill of fourteen acts, each with just four minutes to perform, ensured a vast array of memorable and invigorating acts that didn’t disappoint.

Bolly Ditz Dolly explored the relationship between gender identity and associated rules and pressure of keeping up appearances, touching on concepts of grooming and the condition polycystic ovary syndrome, making a powerful burlesque ‘my body, my rules’ statement that was iconic and truthful.

Hannah Moss as drag act ‘Barry’ gave an hilarious character performance that held weight throughout the production – even the set changes- with a rendition of ‘I need you tonight’ by Professor Green, creating an endearing and well thought through character we might just want to hug, despite his addiction to body spray.

The next act, Lord Bash, a drag act contrasting political statements and sentiments with the day-to-day behaviour of an elderly Lord who wasn’t as great at treating his staff with the respect he held towards his country. Fantastic physicality and vibrant use of props (turquoise glitter and red lipstick) made for a very immersive performance.

Dan de la Motte’s social commentary piece took a deeper dive into the psyche of Mail Online comments, and the people behind them. Perhaps the most audience-engaging performance, his topical storytelling was packed with laughs and an authenticity enabling him to fully parody the concept of what defines being ‘normal’ in society.

Ayatollah Khomaniac was one of the most successful and impactful explorations of lip-syncing to an historical political interview that shone a light on the legitimacy of the British notion of democracy in today’s world, and its links to so-called prosperity.

Lily Tempest provided a beautiful and vivid exploration of the art of dancing, through a gothic-inspired act that told the story of a dancer being pushed to their limits by a teacher. Culminating in a powerful climax, this assured performance had the feel of visual art.

Dan Load was an hilarious drag act that paired extreme masculinity with the notion of man vs food, complete with an explosive display of cheesecake consumption to the back-drop of Greg Wallace’s ‘buttery biscuit base’ which brought the house down.

Shafeeq Shajahan gave a mesmerising, show-stopping glitter-laden performance that won the hearts of the audience with a vivid exploration of self and the human spirit.

Eleanor Brayne-Whyatt gave a thoughtful drag performance of a character struggling with alcohol through the clever re-imagining of a song sharing the struggle, placing us very firmly in the present.

Mr. Nice Guy took a look at casual notions of self-declaring ‘good guys’ from a varied pick of telling sound-bites from popular culture, culminating in that of an incel pre-murder spree, drawing proceedings to an emotive conclusion.

Ana Mator commanded whimsical mystique, with an exploration of femininity, expectations, the unknown and domestic boredom against the playfulness of filling a condom with water and sculpting it to comic effect.

Harry Trevaldwyn supplied a video via projector for his performance, which looked at workplace homophobia through the eyes of a female middle manager who revealed her own homophobia through her attempts to address it unsuccessfully. Hilarious and stark, it shone a light on how systemic homophobia can manifest in the workplace.

N. Cutie was another lip-syncing performance to Annie Lennox’s ‘There must be an angel’ that portrayed the liberation of a straight size 12 thirty-something female teacher, culminating in an empowering cabaret performance that was fun and created a unique sense of freedom.

Kat Cade was a spectacular cabaret performer, heavily pregnant and entering the stage in full Handmaid Tale’s costume before breaking into a humorous performance to Taylor Swift’s Look What You Made Me Do, to a chorus of trumps (wind, not the president) and even with waters breaking. Completely iconic, it was brilliant to see pregnancy in full cabaret swing on stage and a joyous celebration of the female form at its most beautiful.