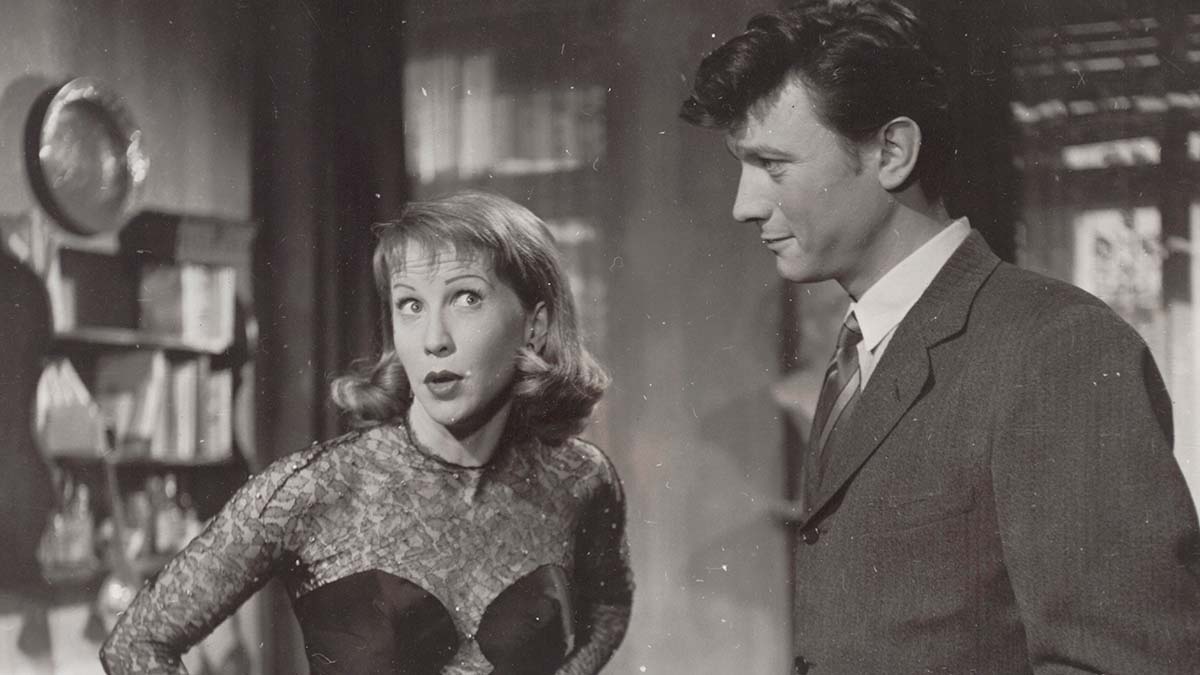 Writer Christopher Isherwood (Laurence Harvey) crosses paths with larger-than-life cabaret performer Sally Bowles (Julie Harris), and he invites her to stay with him when her fiancé takes off with her money. With Sally taking residence in Christopher’s room and him moving into a small room, the relationship between the two veers from potentially romantic to firm friends as they navigate the ups and downs that life throws at them.

‘I Am a Camera’ is based on Christopher Isherwood’s 1945 book ‘The Berlin Stories’ and the 1951 play (also titled ‘I Am a Camera’) by John Van Druten. Originally released in 1955 and with Julie Harris reprising her role as Sally Bowles, the film wasn’t a hit on its release but it has become notorious as the inspiration for ‘Cabaret’, the stage play and film that greatly overshadowed it in the 60s and 70s. Watching the film now, as it fast approaches its 50th anniversary, it’s crazy to think that the film was given an X certificate (over 16s only) for its theatrical release.

The story is essentially one of two people from different worlds drawn together during a time of need. Christopher is infatuated by Sally’s care-free and gung-ho attitude, while Sally enjoys the kindness and support she receives from Christopher. Their relationship is a never-ending rollercoaster, highlighted at the very beginning of the film when Christopher unknowingly attends a party to celebrate the launch of a memoir, which it turns out was written by Sally.

Over the course of the film, there’s a real push-pull relationship that is established between Christopher and Sally. They move in and out of each other’s lives, seemingly never learning their lesson or adapting their behaviour. Sally in particular goes off on a flight of fancy regularly, looking for the next opportunity to improve her life. Her constant disappearances and reappearances turn Christopher’s life upside down but she never really seems to care.

There’s a sub-plot in the film focusing on Fritz (Anton Diffring), a friend of Christopher’s who is trying to conceal the fact that he’s Jewish due to the rising tensions in Germany as Hilter and his followers were on the rise. There’s not enough development but it’s an interesting addition that gives the film wider historical context.

‘I Am a Camera’ features a very strong central performance from Julie Harris but sadly that doesn’t stop the film from being somewhat meandering. There’s no real focus and the build-up doesn’t really lead to anything. Instead, this is simply a tale of the friendship between two people and there’s not a whole lot more nuance to it. Laurence Harvey is perfectly fine as Isherwood but he can’t match the energy that Harris brings.

Extras on the Blu-ray release are fairly scant. Isherwood biographer Peter Parker talks about the writer and the character of Sally Bowles, and there’s an interview with journalist and film critic Anna Smith. Alongside that, the disc features a stills gallery and a trailer.

‘I Am a Camera’ will forever have a place in history thanks to how it inspired ‘Cabaret’ but it’s a fairly unremarkable film. There are moments that you’ll laugh and you’ll likely be pulled in by Harris’ performance, but there’s not enough meat on the bones for this one to truly land or be considered a real classic. ‘Cabaret’ fans should check it out to see the source material of the much-loved stage show and film, but outside of that there’ll be little appeal for most viewers.