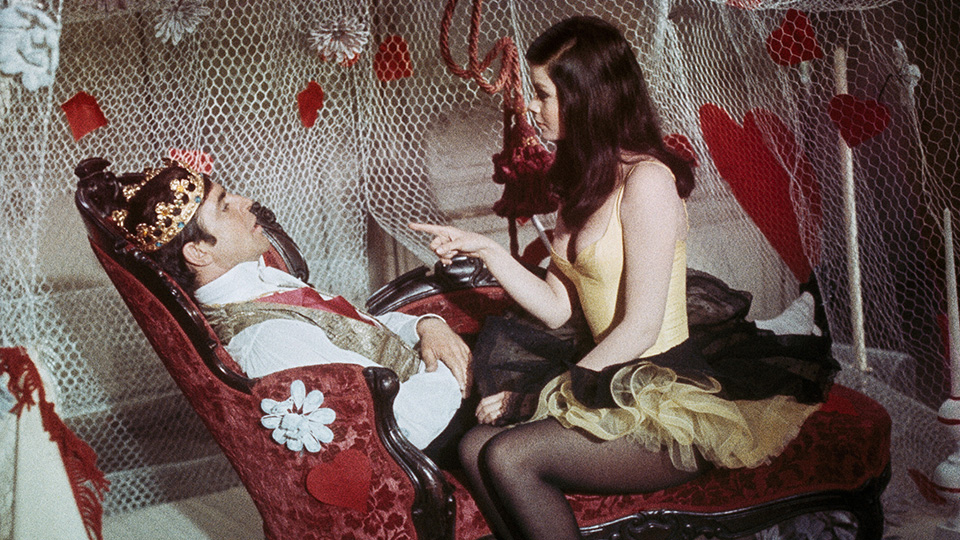 Eureka Entertainment to release King of Hearts [Le Roi de cœur], the 50th Anniversary 4K restoration of Philippe de Broca’s anti-war cult classic that defined a generation, for the first time in the UK in selected cinemas nationwide (UK & Ireland) from 8 June 2018 and as part of The Masters of Cinema Series in a definitive Dual Format (Blu-ray & DVD) edition on 16 July 2018, featuring a Limited Edition O-card slipcase [First Print Run only].

A cult comic masterpiece from acclaimed director Philippe de Broca, King of Hearts was a flop upon initial release in France, but was a smash hit in the US, where it ended up running for five years straight.

During the latter part of World War I, Private Charles Plumpick (Alan Bates; Women in Love) is chosen to go into the French town of Marville and disconnect a bomb that the German army has planted. However, Charles is chased by some Germans and finds himself holed up at the local insane asylum, where the inmates are convinced that he is the “King of Hearts.” Feeling obligated to help the inmates, Charles attempts to lead them out of town, but they are afraid to leave and frolic about the streets in gay costumes. Will Charles be able to deactivate the bomb in time and save his newfound friends?

Featuring a score by legendary film composer Georges Delerue and also starring Geneviève Bujold (Anne of the Thousand Days, Dead Ringers), King of Hearts is presented here from a gorgeous new 4K restoration making its debut both in UK cinemas and on home video as part of The Masters of Cinema Series, in a special Dual Format edition.

King of Hearts, the 50th Anniversary 4K restoration of Philippe de Broca’s anti-war cult classic that defined a generation, is now available for the first time in the UK in a definitive Dual Format (Blu-ray & DVD) edition, and can be purchased here https://amzn.to/2LkP4Nc.

To celebrate the release of King of Hearts, we’ve got 3 copies to give away. For a chance to win, enter below…

In this article:Eureka Entertainment, King of Hearts