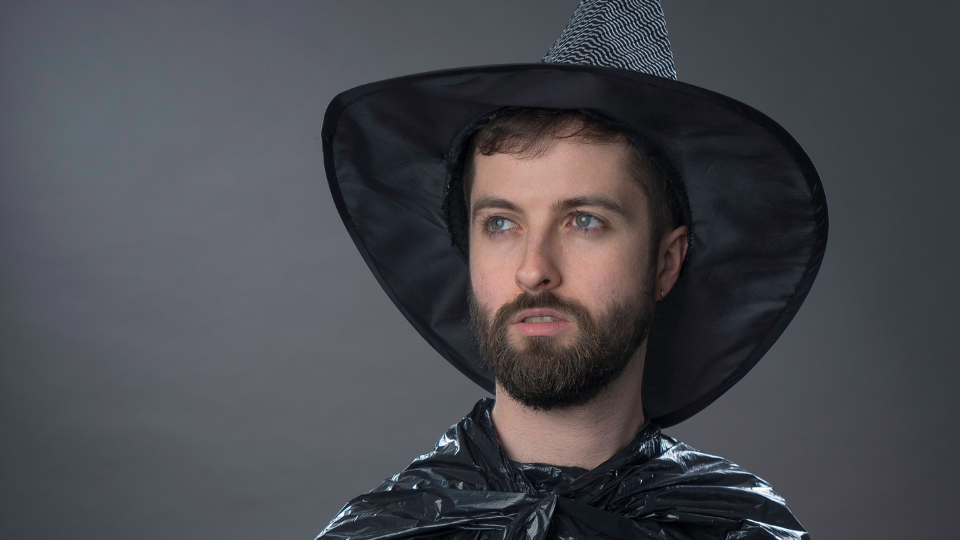 As we navigate a world full of chaos and distractions it’s apparently beneficial to focus on the attainment of three key states each day: achievement, connection and enjoyment. In Edinburgh Fringe terms, achievement could be having a cag-in-a-bag when a spontaneous downpour hits (mac-in-a-sac if you’d prefer); connection could be taking time to listen to a performer while accepting a flyer promoting a show they’ve spent a year of their life developing; and enjoyment could be seeing the new show by character comic David McIver: Teleport, a solo hour that promises transportation to an absurd and fantastical dimension.

David, a self-confessed ‘big fan of not losing thousands of pounds on a venue’ takes his second sixty minute show for its monthly run on the PBH Free Fringe with pioneering production company Objectively Funny.

This year’s show was already a galactic sparkle in David’s eye a year ago before he embarked on last year’s fringe journey. He tells me of the show’s inception: “I had the idea in the summer of last year before I went to last year’s fringe. I knew I had this sad autobiographical story in my family that I wanted to explore”.

Based around the immersive art-form of gaming, Teleport has a poignant nostalgic twist that gives a nod to his younger 16 year-old-self while living at home with his mum.

Transport your mind back in time’s drawn-out continuum to another glorious era when Liverpool were again the Champions of Europe (aka the Steven Gerrard years, or if you’d prefer,  the epoch P.K. (a Pre-Klopp time).

A teenage David became heavily involved in computer games during a challenging family time, an experience that shaped Teleport. He reveals this shaped the show’s themes. “Escapism is a strong theme in the show is based on when I was a teenager and became really obsessed with World of Warcraft. At the time it was the only art-form I could find that allowed me to fully immerse myself in, to escape from parts of life that were uncomfortable.”

However the Gaulier-trained comedian does acknowledge that he probably played a bit too much as a young person, leaving him conflicted as to the overall merits of spending so much time on one thing. He says: “Playing computer games was a big drain on my time – I could have done something more useful like learning an instrument or a foreign language.” But, he continues, “gaming did create an immersive place and bring joy. I couldn’t find another art form on a par with how the narrative and characters evolved.”

Much like the games David enjoyed, the audience too get to experience a fully immersive video game adventure, packed with games, characters, quests, props and humour that sprinkles magic onto the festival, providing a cornerstone of fringe authenticity that audiences will love. On the audiences David usually attracts, he says, “the show is varied and it tends to be something that younger people enjoy, based on the mix of alternative comedy and video games.”

He’s already had successful showings at Brighton Fringe and the Prague Fringe, the latter being less comedy-saturated and allowing for more variety and open-minded audiences less entrenched in the constructs of traditional stand-up.

Riskiest comic in the biz Jordan Brookes takes on the role of director, whose work David has been a long-term admirer of. The pair agreed to work together after David approached Jordan, who had seen David’s show last year. “It’s been great,” said David. “It’s like giving your favourite comedian a bit of money to direct your show.”

He continues, “it’s essential to get a second pair of eyes on the show to help suggest getting round problems. I’m easily swayed by people I respect and enjoy this aspect of the creative process.”

The Albany on Great Portland Street has been the base for rehearsals, and the forward-thinking venue has also been accommodating to the Objectively Funny production company, run by Martin Willis and other comedy performers with an exclusive partnership with mental health charity CALM to deliver pioneering workshops, peer support and fundraising events in aid of performers at this year’s festival. David chose to get on-board with Objectively Funny this year for this reason, “as performers themselves, the producers just ‘get it’ more than other production companies might.”

David plans to keep a balanced approach to this year’s run with meditation, exercise and healthy eating. He also takes a measured approach to how his shows are received, ‘to some extent if you have a bad show in the early days, you can learn what needs to change.”

However once you get half-way through, it is a case of accepting that this is what the show is.”

The narrative arc of the adventure is not the only story in play, as we have a puzzle to put together on the show’s creator, and, once solved, it will tell us a bigger story about the computer game we call life and all its component parts, the importance of connecting with our loved ones and finding enjoyment through adversity really is an achievement.

David McIver: Teleport runs from 3rd-25th August (not 12th) on the PBH Free Fringe at the Banshee Labyrinth (Cinema Room) at 12:20pm. Suitable for ages 14+. For more information visit https://tickets.edfringe.com/whats-on/david-mciver-teleport