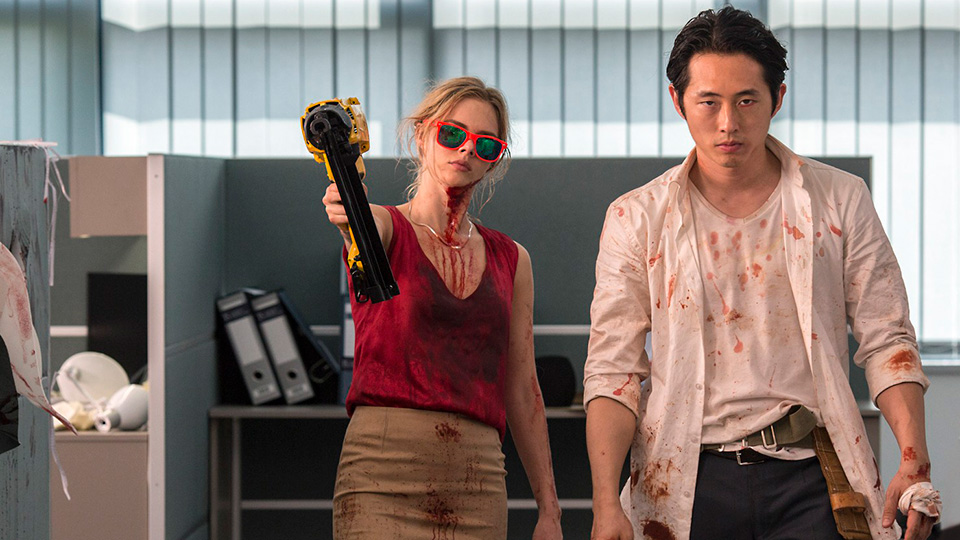 Attorney Derek Cho (Steven Yeun) is unfairly fired from his job after being framed by vicious co-worker Kara Powell (Caroline Chikezie). As he collects his belongings and prepares to leave the office building, Derek is caught up in a lockdown when a dangerous virus is found and the building is quarantined. The virus prevents the infected from being able to control their inhibitions and chaos soon erupts. Derek teams up with client Melanie Cross (Samara Weaving) to exact revenge on the firm’s bosses, who have wronged them.

Mayhem was one of the best-received films at Horror Channel FrightFest in 2017 and almost a year on, it’s finally getting a DVD release. Directed by Joe Lynch (Wrong Turn 2: Dead End), the film is a balls-out joyride that plays out a scenario I’m pretty sure most office workers that hate their job and boss have imagined in their heads at one time or another. The rules are set early on when it’s revealed that anyone who kills while infected, isn’t held accountable so Derek and Melanie see the perfect opportunity to get revenge without having to suffer any consequences.

Mixing comedy and horror effectively, Mayhem is a really enjoyable watch. The film zips by at lightning speed and there aren’t any lagging moments. As soon as Derek and Melanie team up, their mission to get to the top of the building and confront the bosses is the sole focus. I actually found it refreshing not to have a ton of pointless sub-plots going on while the main story played out. The story has the same laser focus as Derek and Melanie.

Steven Yeun (The Walking Dead) and Samara Weaving (Three Billboards Outside Ebbing, Missouri) really let themselves go in their roles and both are excellent. After seeing Yeun in The Walking Dead, it’s nice to see him taking on a role that utilises more of his acting abilities. He’s very funny in this film and it’s a joy to watch him letting rip. Weaving, who is marking herself out as an actress to keep an eye on, also clearly relishes her role her and she veers between hysterical and gleeful in some of the film’s more violent scenes.

The relationship between the two characters is one of the best parts of the movie. In the opening moments they are adversaries but once they realise they could use each other to achieve a common goal, the two become fast friends. They really spark off one another and their chemistry is evident as soon as the infection hits.

Mayhem is pure entertainment from start to finish and there’s not a great deal you can find fault with. The performances are top notch, the story is endlessly entertaining and the direction is very stylish. If violence isn’t your thing, then you’d be best advised to stay away from this one but you’d be missing a very good film. Mayhem is fresh, funny and original, and it’s a showcase for two actors who by rights should be top of every casting director’s list.